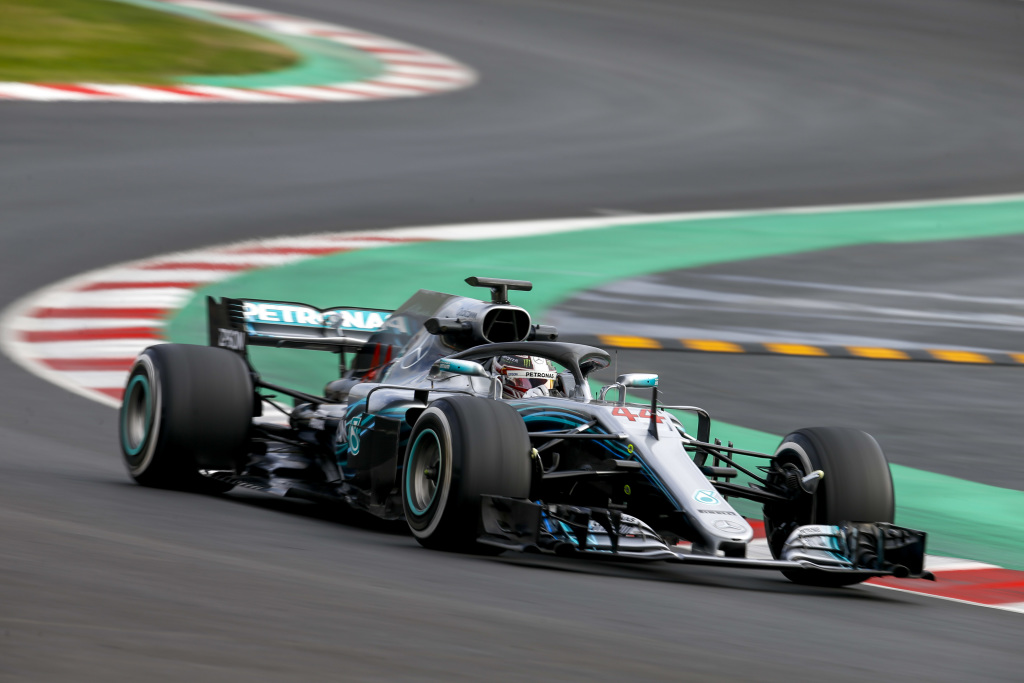 Lewis Hamilton set 2018’s fastest testing time yet on Thursday, as the first week in Barcelona ended with its busiest day so far.

In total, 15 of this year’s 20 race drivers enjoyed track time at the Circuit de Catalunya on Thursday, with most teams opting to run both their drivers to make up for time lost during the week’s weather disruptions.

The final day of testing began with yet another damp track, but higher temperatures compared with previous days meant meaningful running was not an impossibility.

When the track dried enough for slicks around midday, Valtteri Bottas and Nico Hülkenberg took the opportunity to trade times at the top of the leaderboard, until McLaren’s Stoffel Vandoorne beat them both with a 1:19.854s on the pink hypersoft tyre.

Vandoorne’s time—one of only four to dip below 1:20s this week—was good enough to hold onto the top spot for most of the afternoon, until Hamilton went half a second quicker on mediums with an hour to go.

As well as finishing second-fastest on the strength of his hypersoft time, Vandoorne was also among Thursday’s busiest drivers, with 110 laps to his name.

Only two drivers recorded more mileage than the Belgian. Sebastian Vettel, who was third-fastest behind Vandoorne, made it to 120 laps, while Pierre Gasly signed off a solid week for Toro Rosso and Honda with 147 laps.

Kevin Magnussen also had a profitable day, despite not joining Gasly, Vettel and Vandoorne in triple figures. After finishing bottom of both the time and lap charts with his first taste of the Haas VF-18 on Tuesday, the Dane bounced back on Thursday by logging 96 laps and the fourth-fastest time.

Fernando Alonso, taking over from Vandoorne for the final few hours of Thursday, added another 51 laps to his week’s total and snatched fifth by just 0.010s from compatriot Carlos Sainz. Lance Stroll was a few tenths slower in seventh.

Sergio Pérez, driving Force India’s VJM11 for the first time, had a slow start to the session but eventually logged 65 laps and was classified eighth.

He was ahead of Max Verstappen, who by contrast had another trying day behind the wheel of the RB14. Having chosen to sit out the wet morning running, the Dutchman lost further track time with a fuel leak and a spin into the gravel later on—as a result, Verstappen recorded the lowest number of laps of the day (35) and ended the day nearly three seconds off Hamilton’s pace.

Thursday’s longest runner Gasly was tenth-fastest ahead of early pacesetters Hülkenberg and Bottas. The two Saubers were the last of the representative runners, with Charles Leclerc heading Marcus Ericsson by a second thanks to the afternoon’s faster track, although with 59 laps to Ericsson’s 79.

Lastly, Williams’ rookie Sergey Sirotkin spent another day at the bottom of the timesheets. The Russian handed over his FW41 to teammate Stroll in the afternoon and as such didn’t set a time on slicks, explaining his 12.646s gap to Hamilton at the front.