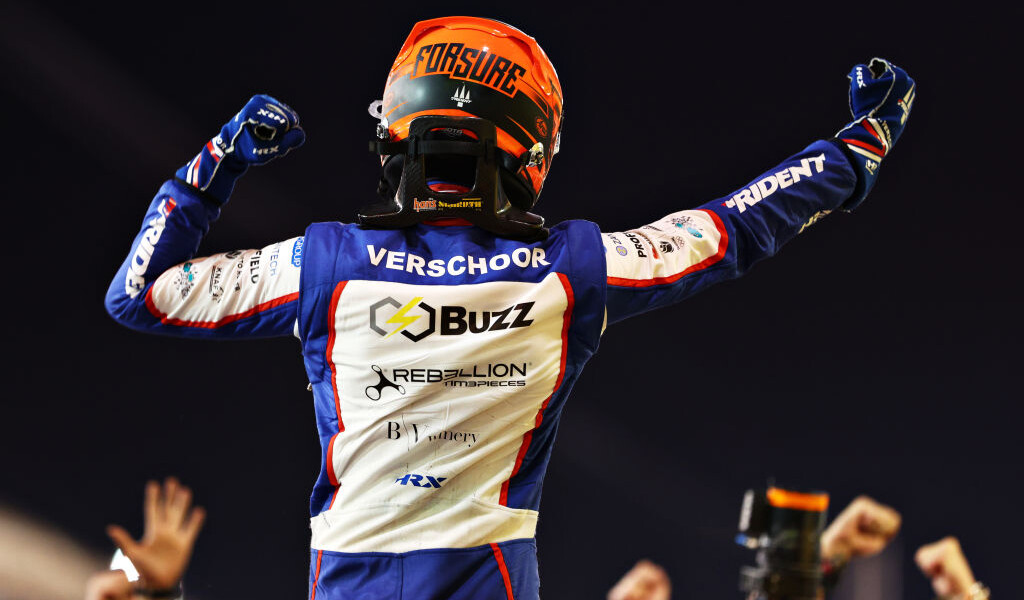 Trident’s Richard Verschoor took the first win of the Formula 2 season in the Bahrain sprint race, after pouncing on the lead early on and controlling the race from then on.

Verschoor started from second place on the reverse grid, alongside polesitter Felipe Drugovich. But when the lights went out Drugovich was bogged down off the line and Verschoor immediately assumed the lead heading down to Turn 1, while Jehan Daruvala and Ralph Boschung filtered into second and third.

Drugovich slipped back into the midfield pack as he recovered from his slow start, eventually stabilising in sixth place behind Liam Lawson in fourth and Jake Hughes in fifth. At the start of the second lap Drugovich passed Hughes for fifth place. Their battle down to Turn 1 opened the door for Theo Pourchaire, Jack Doohan and Juri Vips, who all passed Hughes over the course of the lap to demote the Van Amersfoort driver down to eighth.

Hughes’ struggles then continued as he tried to fight back but ended up making contact with Marcus Armstrong and spinning the Hitech around. That brought out the safety car as Armstrong was unable to get going again.

Behind the safety car Drugovich, who had fallen behind Pourchaire, reported that Pourchaire’s car was dropping oil on the track. At the restart on lap 6 Pourchaire then fell down through the order with a mechanical failure and was forced to retire. Meanwhile Lawson darted to the inside of Daruvala at Turn 1, but Daruvala was able to hold off the Carlin to keep third place.

After fending off Lawson, Daruvala started to reel in Boschung as the Swiss driver’s tyres fell away from him. On lap 15 the gap between the two was just a few tenths, and Boschung had little grip to defend second place as Daruvala made his move into Turn 1 on the following lap.

Boschung was able to briefly reclaim second place on lap 17 after a virtual safety car period brought on by Hughes stopping on track. But that only lasted a lap until Daruvala was back in front of the Campos, and on lap 21 Lawson demoted Boschung another place as he took third at Turn 1.

As the battle over second, third and fourth unfolded behind him, Verschoor continued unchallenged in the lead. By the time the final lap came around he had a 2.3 second gap over Daruvala, and crossed the line to comfortably take his second victory in F2.

Boschung finished the race in fourth behind Lawson, and ahead of Drugovich in fifth. Logan Sargeant made his way into the points in the closing stages to take sixth place for Carlin, and Vips and Ayumu Iwasa rounded out the points in seventh and eighth.