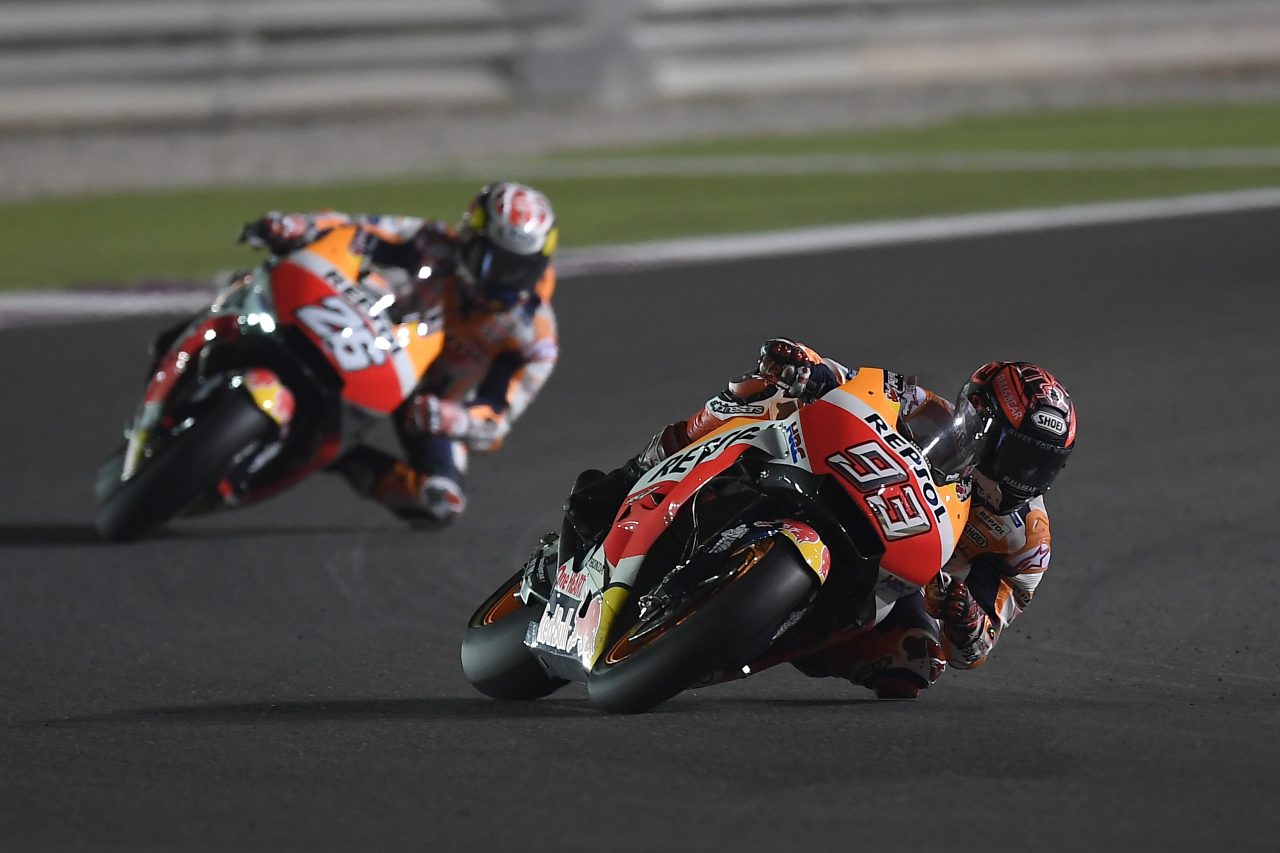 Preseason testing was concluded this week at the Losail International Circuit, Qatar. From the previous two tests in Malaysia and Thailand we knew that the expected protagonists for 2018 – Honda, Ducati and Yamaha – were all strong over a single lap and low fuel runs. This week, all attention was focused on fine tuning performance over high fuel run, race simulations. With so much activity going on across the competition, here’s a breakdown of the performances from each manufacturer.

In the immediate aftermath of February’s test at the Chang International circuit in Thailand, Marc Marquez declared that the RC213V needed to improve the engine performance under acceleration – or risk losing significant ground to the factory Ducati machines. After three days’ testing under the lights, a positively beaming world champion suggests that the team have duly delivered. Although never setting the outright fastest time at any point this week, the real evidence of progress lay in the metronomic consistency in Marquez’ race simulation runs on Friday afternoon. The reigning world champion turned in a longest run consisting of 17 laps with averaging lap times around the 1’55.4-6 mark. Whilst a handful of riders did record the occasional faster lap during their race simulations, nobody has the relentless consistency of Marquez. A clear signal of intent from the Spaniard, and an ominous warning shot to the rest of the competition.

There was an equally impressive display on show this week from LCR Honda’s Cal Crutchlow. The British rider was one of a select group who took to the track during the middle of the day. Officially just to help clear the racing line of dust and sand that had been blown in from the desert, but he wasn’t averse to setting a serious benchmark time either for the rest of the class. Following the conclusion of the test, Crutchlow jested that the Honda now has too much power and were having to “try and tame” the engine through the corners. His team mate, rookie Takaaki Nakagami continued to adapt and improve to life on board a MotoGP bike. Although he was never going to feature with the more experienced HRC trio at the top of the standings, the Japanese rider has been rightly praised for his work ethic. His team manager, Lucio Cecchinello, keen to emphasise that the data the Moto2 graduate has collected for the team (and the wider HRC operation) has been invaluable.

Hot on the heels of the race pace of Honda, and narrowly leading over a single lap, Ducati once again had a solid test.

Andrea Dovizioso will have every reason, going into the first round, to expect he can go one better than last year and be the 2018 MotoGP world champion. Of course, so will his team-mate Jorge Lorenzo. The Spaniard has looked much more like his old self this winter (aside from a difficult test in Thailand), being consistently closer to his teammate – both in outright lap times and average long runs. Both riders have expressed their satisfaction with the bike and the efforts the team have made. Dovizioso going further by declaring that: “We’re a title contender from the beginning, for sure”.

The Desmosedici GP18 looks to be the rarest of Ducati creations – it does not seem to have any particular weakness. It is still a missile in a straight line, highlighted this week by the 1 kilometre long main straight at the Losail circuit. In past seasons, the clear weakness of the machine has been unresponsive handling through long, medium speed corners and an often volatile throttle pick up upon acceleration. By all accounts, the latter has been completely resolved. There is still some work to do regarding the cornering performance of the Ducati, which explains why the team sent their riders out on more fairing comparison tests – one bike would be in ‘standard’ fairing mode, whilst the other would be equipped with the latest version of the ‘wing fairing’. Dovizioso openly prefers the standard fairing at most venues, Lorenzo prefers the aerodynamic wings. Both ran almost identical race simulation pace on the final day of testing. Over a single lap, Dovizioso’s best time of the week suggests that they might be the team to beat during qualifying. Race pace simulations suggest that they are on average around 0.2 seconds adrift of the Honda riders.

The development of the Ducati has undoubtedly been helped by incorporating the satellite team (Alma Pramac) into the factory effort. With both riders, Danilo Petrucci and Jack Miller working under Ducati Corse contracts (rather than just Pramac Ducati) the Italian manufacturer’s pool for data gathering has doubled. Both Petrucci and Miller are also on GP18 machinery this year, and have consistently backed up the factory riders’ times across the board in testing. Nowhere was that more in evidence than in Qatar this week during the race simulations. All four GP18 bikes consistently lapped around the 3.34 mile circuit, averaging lap times between 1”55.5-1”55.8.

In complete contrast to the fortunes of Honda and Ducati, Yamaha – specifically the factory Movistar Yamaha team – appear to have endured a torrid three days in the desert. Over a stint on low fuel, the YZF-M1 looks like it potentially has the beating of all of its rivals. This has been demonstrated throughout the winter with Maverick Vinales romping away with headline times at Malaysia, and Johann Zarco reaping a similar result in Qatar this week. The Frenchman’s best time was comfortably quicker than what anyone else managed all week.

This at least should give Yamaha some hope in their 2018 bike as the potential of the machine is clearly visible under low fuel loads. A clear move by the the manufacturer to ensure their bikes are capable of starting from the front row more regularly this year. In fairness, it was a problem which needed addressing. Grand Prix victories are hard enough to achieve when qualifying at the front – next to impossible when having to start from the third row. However, there is now a serious concern that their endeavours to improve the bike over a single lap has cost them dearly over a race distance.

Handling appears to be a problem, with particular emphasis on a lack of stability at the front end. In the official review show ‘After The Flag’ which is produced by MotoGP each night following the sessions, Vinales’ interviews regularly bemoaned a ‘lack of grip and feel’ upon the bike’s entry into corners. Not being able to feel how the front tyre is behaving forces the rider to guess the grip level he will have through the corner – essentially he has to push blindly and trust the bike won’t fold beneath him. At the very least it seriously hinders a rider’s ability to deliver to true lap time. Rossi tried – his longest stint of the test being 11 laps, but lap times fluctuated considerably between 1″55.9 and 1″56.6 across the stint. Maverick Vinales did not attempt a race simulation on Friday. His longest run consisting of only 7 laps.

One team who will be undoubtedly pleased with how testing went in Qatar – and indeed throughout the winter – will be Suzuki.

Iannone has been fast throughout the week, regularly visiting the top of the time sheets and exploring the ample run areas at turn 1. The latter can be explained by the team testing out different brake settings on Thursday. Friday was spent chasing the headline lap times, as both riders completed numerous short runs between 3 and 5 laps at a time. Iannone set his best time of Friday’s session, ensuring he finished the day with the fastest time of the field.

Rins was not far off his team-mate on low fuel pace. However he came into his own on the final day, setting his best time in the early afternoon before embarking on two lengthy race simulations. As expected, the Suzuki bike is looking to be a little way behind the performance of Honda and Ducati.  At best, Rins’ average pace hovered around the 1″55.8 marker. Nevertheless it was consistent and, crucially, Rins did not drop the bike in any of the numerous gravel traps. No time lost repairing the bike, maximum time spent gathering precious data for the engineers. Compared to where they were this time last year, Suzuki can head into the 2018 season confident of being competitive from the start.

The newest manufacturer in MotoGP have continued to defy all expectations, and continue developing their machine at a pace which more than matches several of their rivals. In Qatar this progress was once again very much in evidence.

Bradley Smith shouldered the majority of the workload for the Austrian factory team this week after Pol Espargaro was forced to sit out Friday’s session due to injuries sustained earlier in the winter. The British rider completed 160 laps (534.4 miles) over the three days for the team. With such a heavy workload however, any plans for qualifying simulations were promptly consigned to oblivion – especially after Espargaro’s withdrawal and bad weather scuppering the first half of Friday. The revised program saw Smith concentrate solely on race setup and completing numerous long fuel runs, whilst test rider Mika Kallio was called up to experiment with various new settings on Friday.

As such, the raw pace potential of the KTM was never truly revealed. However, the improvement of the bike – and the sheer consistency of Smith’s riding – was clear. Even though they did not trouble the headline pace setters, the fact that the team ended the test only 1 second behind the fastest time – and within a few tenths on projected race pace – indicates just how competitive this team have become in such a short space of time.

Quietly going about their business, the Aprilia Gresini team turned in an impressive 373 laps across the test’s three day duration. That equates to a staggering 1245.82 miles of data collected for the Italian outfit. If nothing else we know for certain that the 2018 Aprilia machine is far more reliable than its predecessors, with both riders having completed multiple race simulations this week. With the new found confidence in reliability, the team could focus their attention on other performance improvements. A lack of power through low gear corners is one such problem which the team spent much time working on this week.

Although the fastest laps of both riders pale when compared to the other factory teams, it is worth remembering that Aprilia operate on a fraction of the budgets their rivals have at their disposal. As such, the development rate of the RS-GP will always struggle against the RC213V or the M1. A fact which was not lost on either of Aprilia’s riders this week. As Scott Redding summed up: “We are constantly working on several fronts because we are developing the new bike. We could have been a few tenths faster on our time attack but, to be honest, I think that we have other priorities at the moment.”