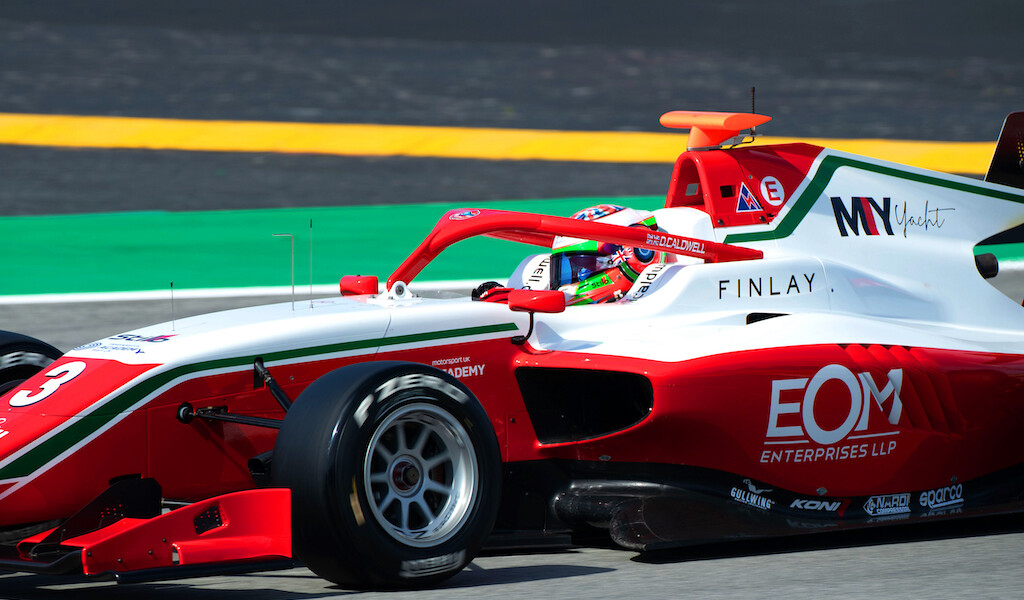 Olli Caldwell took his first Formula 3 win in the second Barcelona sprint race, inheriting the lead late on after two separate battles for the win ahead of him ended in collisions.

The race started with Enzo Fittipaldi on reverse pole ahead of David Schumacher, Matteo Nannini, Victor Martins and Dennis Hauger. At lights out the top five all got away in order, while Caldwell went from seventh to sixth by passing Frederik Vesti.

The first four laps ran behind the safety car, after Logan Sargeant and Alex Smolyar came together further back at the start. When the race resumed on lap 5, Schumacher started pressuring Fittipaldi for the lead by keeping within DRS range, while Hauger and Caldwell took advantage of Martins running wide to take fourth and fifth respectively.

After making several attempts to pass Fittipaldi under DRS into Turn 1, Schumacher finally took the lead of the race on lap 12. However, Schumacher wasn’t able to pull clear at the front and Fittipaldi attempted to retake the lead at Turn 1 on lap 14.

Schumacher fended off Fittipaldi on that occasion, but the Brazilian came back around the outside of Turn 1 on the following lap. But as they went side by side through Turn 2, the pair made contact which took them both out of the race, brought out the safety car, and handed the lead to Nannini.

When the safety car came in at the end of lap 17, Hauger immediately challenged Nannini from second but was rebuffed into the first corner. Hauger kept close to the HWA through the next couple of laps and tried another move up the inside of Turn 1 on lap 20, but remarkably they too collided as they went side by side into Turn 2.

As Nannini was spun round and Hauger lost his front wing, Caldwell avoided the incident to lead from Martins and Vesti with three laps remaining. Martins tried to pass Caldwell into the first corner on the final lap but bailed out of the move onto the runoff area, leaving Caldwell clear to take the win.