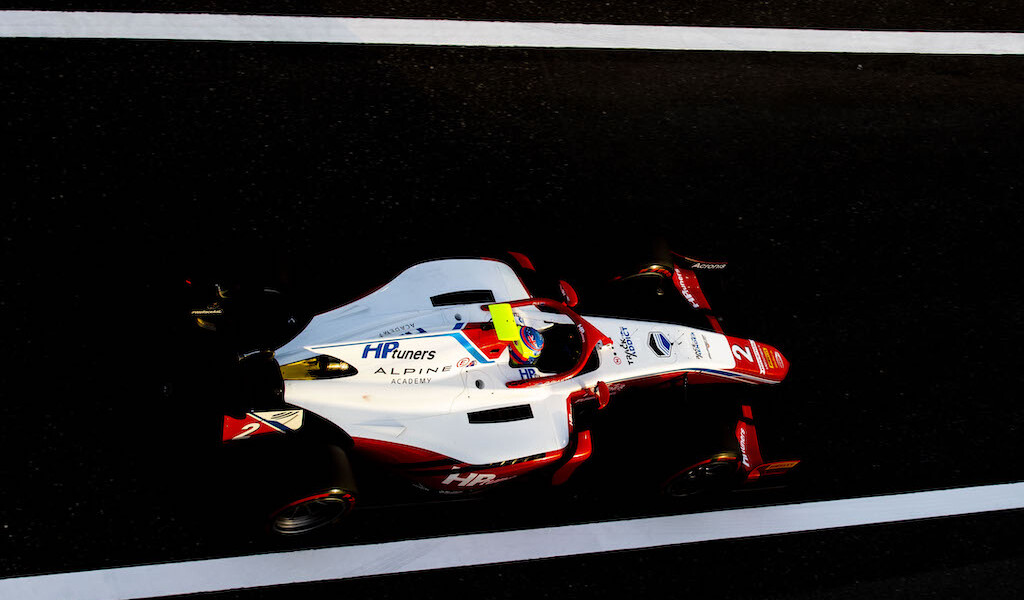 Prema’s Oscar Piastri became Formula 2’s second rookie winner in as many races after a strategy gamble and a hectic race helped him to overhaul Guanyu Zhou on the final lap.

The race started with an incident at the first corner. As Juri Vips led away Lirim Zendelli and Zhou from pole, Robert Shwartzman hit Dan Ticktum at Turn 1 as he challenged for fourth place. Ticktum spun out and Shwartzman pulled over with terminal damage, and the safety car was deployed for the opening lap.

When the safety car pulled in at the end of lap 3, Zhou immediately took second from Zendelli. Once ahead, Zhou then started reeling in Vips, setting the fastest lap at the end of lap 4 and taking the lead from the Hitech on the following lap at Turn 4.

Meanwhile, Liam Lawson and Felipe Drugovich joined the podium battle. After moving past Piastri and Christian Lundgaard for fourth and fifth respectively at the restart, the pair then demoted Zendelli to fifth on lap 5 with Lawson ahead moving into the podium positions. Zendelli’s race then took another hit, as contact from Lundgaard at Turn 1 left the German with a puncture and dropped him to the back of the field.

At the front of the field, Zhou continued to stretch out a gap over Vips, and was running 2.5 seconds clear by lap 11. Behind them, Lawson and Drugovich were much closer in the battle for third, and on lap 15 Drugovich made a move to the inside of Turn 1. Lawson managed to hold off the Brazilian, but they were both passed instead by Lundgaard. Lawson and Drugovich continued battling through the next couple of corners, until they made contact at Turn 4 and Lawson was spun out of the race.

The safety car was deployed again while Lawson’s car was recovered, and Vips, Lundgaard and Piastri all took the opportunity to gamble on a switch to soft tyres. Despite dropping down the order, the trio had an immediate pace advantage over the rest of the field on hards or worn softs when the race resumed on lap 18.

After carving back through the field on the first green flag lap, Vips, Piastri and Lundgaard were back up to second, third and fourth respectively by the end of lap 19, and Vips had the gap to Zhou down to a second.

But Vips’ hard work came undone just a few laps later when he lost power and started dropping through the field. Piastri assumed second and the pursuit of Zhou, and at the start of the final lap he and Lundgaard both lunged past their fellow Alpine junior at Turn 1.

As Zhou battled to repass Lundgaard, Piastri was free to pull away in the lead and take his first Formula 2 victory. Lundgaard finished second on the road, but a ten-second penalty for his collision with Zendelli dropped him back to ninth. Zhou therefore finished second, and Jehan Daruvala scored his second podium of the weekend in third.

UPDATE: Lundgaard’s second place finish was reinstated following the race, after the FIA confirmed he had already served his 10 second penalty during his pit stop. The updated result means that Zhou drops to third and Daruvala fourth, and Nannini loses his point as he drops to ninth,.