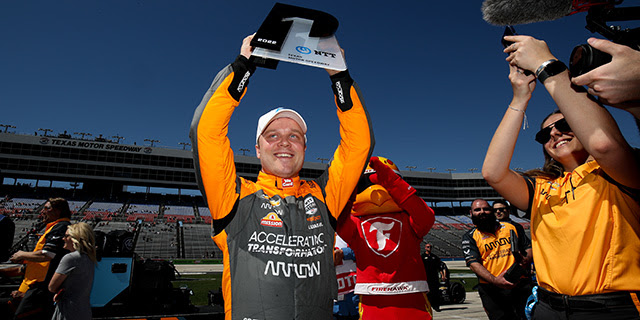 Arrow McLaren SP’s Felix Rosenqvist took his second IndyCar career pole and first oval pole at Texas Motor Speedway for tomorrow’s XPEL 375 below a hot midday sun. The fight for pole proved to be incredibly tight as the top five were separated by less than one tenth of a second. Rosenqvist managed a two-lap average of 221.110 mph and was one of the first drivers to take to the track in what was single car qualifying. The debate was whether the increasing temperatures would offset the building rubber on the race track as the session went on.

Points leader Scott McLaughlin nearly stole the pole away from Rosenqvist as the final car after his first lap was in range but fell just short with a 221.096mph two-lap average placing him second. Halfway through the session, Dale Coyne Racing’s Takuma Sato had a very impressive run with a 221.094mph run, claiming third. Pole master Will Power earned a fourth place with five-time Texas winner Scott Dixon claiming fifth.

Seventeenth place was the first of the rookies, Devlin DeFrancesco, with a run of 219.888mph. Close behind was IndyCar oval rookie Jimmie Johnson, managing a highly impressive 18th place with a two-lap average of 219.866mph. While he is a seven-time Texas Motor Speedway winner in the NASCAR Cup Series, this is his very first oval IndyCar race weekend. Johnson has continued to make progress after being 22nd in practice one. RLL did not have a good day, with 2016 Texas winner Graham Rahal having downforce issues, coming in last with a run of 218.410mph with teammates Jack Harvey and Christian Lundgaard qualifying 24th and 25th.