Into stage SS8 San Fermo 1 – 14.80 km and Thierry made the best start of them all, winning the stage from Seb and Dani. Elfyn could only manage the fourth best time dropping 4.6 seconds to the fastest time and falling behind Seb again, the gap between the top two now 1.5 seconds.

The longer SS9 Selvino 1 – 24.93 km saw Elfyn take the stage win from Dani and Seb. There was drama for Thierry though right at the start of the stage. His tyres weren’t warmed up and he lost the rear of his car, with the result that he then collided with the barrier and caused some big damage to the right-hand side front of his car. The bonnet was also very loose on the right as well and flapping about, but he got the car to the end of the stage despite all of this.

Back to the shorter SS10 San Fermo 2 – 14.80 km and it was another stage win for Seb from Thierry and Teemu. Elfyn was only sixth and fell back into second place, now 1.1 behind Seb. Further back, Teemu passed former M-Sport teammate Gus Greensmith as well, showing that the Finn was getting to grips with his i20WRC.

Seb increased his lead over Elfyn in SS11 Selvino 2 – 24.93 km to 5.2 seconds after setting a time that was 4.1 seconds faster. What a time! Dani was third fastest and making third place his over his teammate. The top ten was pretty static, but it’s worth mentioning that this was the last stage on public roads that these cars were unleashed on, as the remaining stages of Rally Monza would be held in the grounds of the Monza circuit.

Elfyn hit back in SS12 Sottozero 1 – 14.39 km winning the stage from Dani and Thierry! Seb could only set the fifth best time and was now back in the lead by just three tenths of a second. Takamoto was the best of the rest, taking fourth in the stage.

The final stage of the day then, SS13 Sottozero 2 – 14.39 km and run after the sun had set. All the cars had their light pods fitted. Dani won the stage from Thierry and Seb, and we had yet another leader change with Seb going back into the lead and Elfyn was now behind by just half a second. 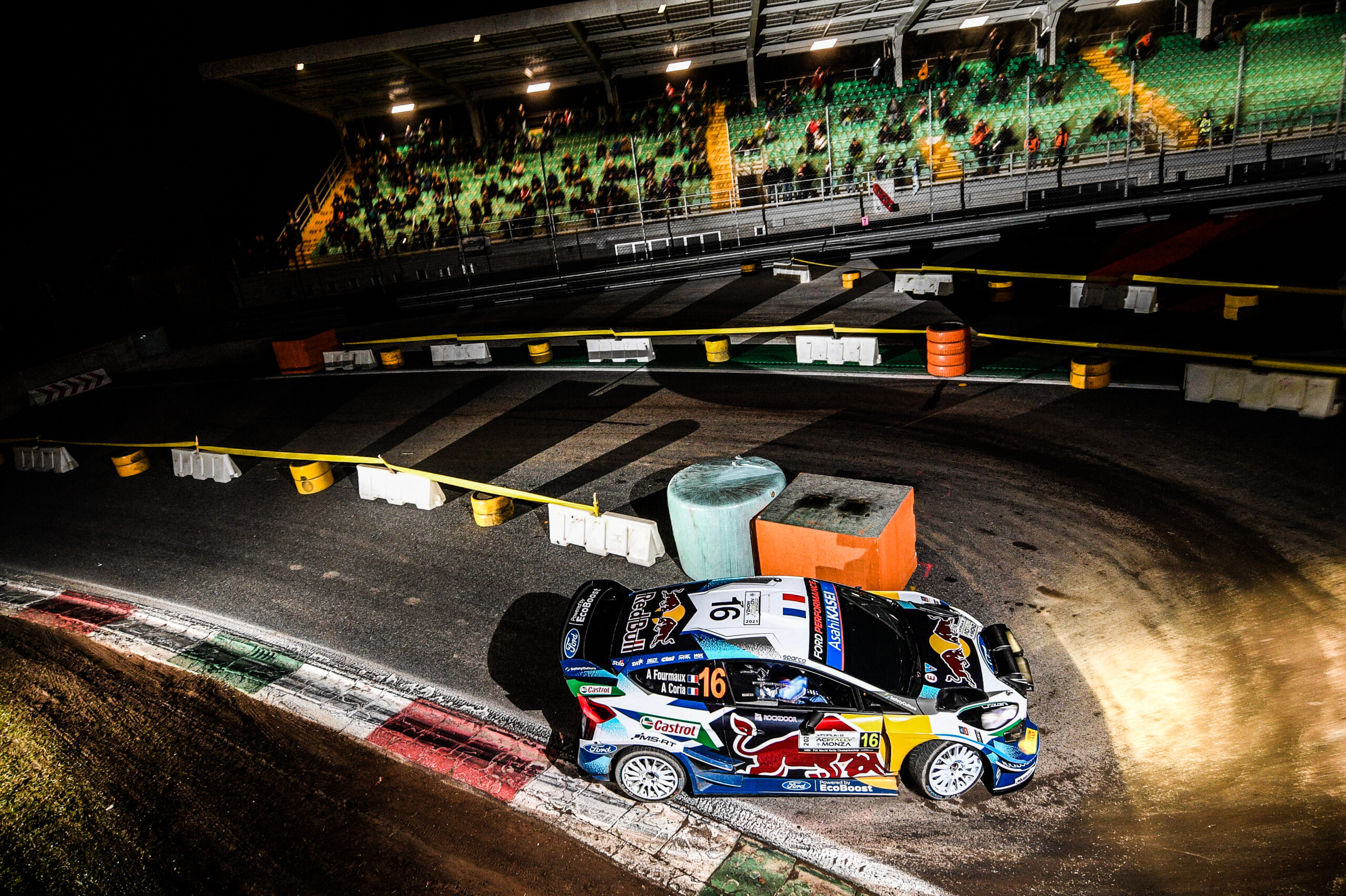 Lets hear from the drivers at the end of day two.

“It’s been super close today between Elfyn and me, with so many swaps for the lead. It’s definitely exciting for the fans. We had a good loop this morning. Those were the last proper stages with this generation of car and I really enjoyed it. Generally, on the track I’ve been taking less risks and losing a bit of time, but tonight I managed to drive cleaner, and a slightly different tyre choice maybe helped with the traction on the gravel. Tomorrow I need to keep my focus on the title; if we can win the rally too it will be the cherry on the cake.”

“The morning loop was enjoyable but Seb was very strong again in the mountains. I struggled on the first stages both times through, had a good run on the other stage the first time through but I’d lost the tyres a bit by the end of the second pass. I was a bit disappointed to give away that time, but we got it back again in the first one at the circuit this afternoon. Then in the dark I was too careful in a few places where the visibility was quite difficult. But it’s set up very nicely for tomorrow and we’ll keep fighting.”

“This morning the conditions were really nice and the stages were much cleaner than yesterday, so I could be a bit faster in some sections without having to take any risks and just enjoy the driving the car on those roads. The circuit stages were nice and enjoyable too, even though we were not pushing much. It’s important for the team to do the job that we’re doing, and tomorrow we just need to finish it off.”

“Honestly, I am quite happy with how today has gone for us. We had some amazing stages in the mountains, and the circuit sections were better as well. We made some important modifications to the car at the end of Friday, which made it easier to drive and gave me more confidence. The stages were also drier, so we had a bit more grip as well. We are currently in the third-place podium position, which is great, however there is a small but tricky final day awaiting us. We will do our best to keep our advantage over Thierry.”

“After the first day didn’t go as expected, we knew we had to push to catch back time. It worked well on the opening stage, setting the fastest time, but we wanted to improve more on the next one. Unfortunately, we had cold tyres and two corners into the stage we lost the rear, ripping off the bumper. We lost a position to Dani, and we’re still fighting to get it back. Still, I’ve been able to enjoy myself today, especially in the mountain stages; these cars are incredible, there has been a great atmosphere, lots of spectators and nice weather, it is really fantastic!”

“I am pleased with the improvements we have made since yesterday, and especially in the first four stages. I was able to be confident in the car, and the driving was OK. I was still struggling on the gravel and muddy places in the Monza circuit stages. Still, we have taken a good step forward and that’s positive. I’m enjoying myself a lot, and it’s nice to see what the Hyundai i20 Coupe WRC can do; it seems a strong car, so we will try to improve again on the final three stages tomorrow.”

The last day beckons for the 2021 season and the last time that these cars will be seen on the world championship stages. It’s also the last few stages of Seb and Adrien’s partnership. Let’s see if they can go out on top, or maybe Elfyn and Scott will deny them a final victory. There are two championships to decide as well. Let’s see what happens…. Is there a final twist to this season, or can Seb and Adrien wrap up their eighth world title?