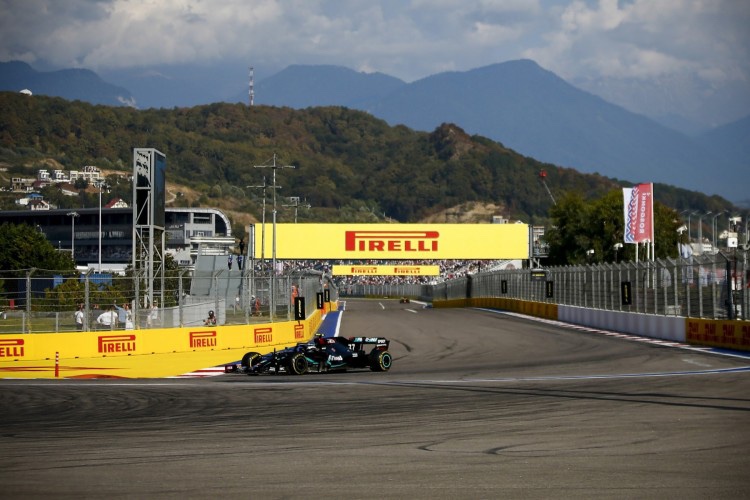 In a race that was decided pretty much by the events happening before the lights going out, Valtteri Bottas took his 2nd victory of the year, long after the win in the first race of the season. His teammate Lewis Hamilton was awarded two different 5-second penalties for two practice start violations that he committed prior to the race start, in the locations where he was not supposed to.

This made the race very difficult for the record chasing English driver as he dropped well down the order after he had to serve the penalty in a pitstop. He recovered well to be able to finish on a podium but will be gutted to miss out on a win. Bottas on the other hand would welcome this victory at a track where he is supposedly at his strongest.

It was a lonely Sunday afternoon drive for Max Verstappen, which pretty much sums up his season so far barring the last couple of races. The Dutchman dropped to as low as 4th on the race start but recovered immediately to 3rd place and Lewis’ penalty meant that he would comfortably finish 2nd. It was a similar race for Sergio Perez in the racing Point at 4th place after he too recovered from a poor start.

It was a chaotic start to the grandprix after many incidents unfolded one after the other. McLaren lost the most out of all the teams at the start after Carlos Sainz crashed into the wall in an attempt to try and go around the bollards and his teammate Norris ran over the debris left by Sainz and only managed to finish 15th at the end of the race after a forced pitstop. Racing Point also lost one car on the opening lap after Lance Stroll got tagged on the right rear tyre by the Ferrari of Charles Leclerc which sent the former spinning into the barriers. The effect of the new upgrades was not to be seen today and will have to wait until the Nurburgring at the earliest.

A couple of mini battles unfolded in the midfield between Ferrari and Renault followed by another between the Alpha Tauris and Albon’s redbull. Renault’s bid to swap their cars and catch Perez ended in a way they would not have wanted after Ricciardo was handed a 5-second time penalty for not following race director guidelines. It did not quite help Ocon’s case after the Frenchman was stuck behind the Ferrari of Vettel and could not catch Leclerc towards the end of the race. Ricciardo’s penalty did not hurt him much after he managed to pull ahead of Leclerc and finish 5th. For Ferrari, it was a mixed result as Leclerc managed to finish 6th and Vettel paid the price for staying out long and could only manage P13 on his 250th GP start.

Both the Alpha Tauris managed a double points finish with home driver Kvyat at 8th and Gasly at 9th following their battle with Albon in the other RedBull. Kvyat could have finished ahead of Ocon at 7th after the Russian battled the Renault driver almost towards the end of the race but it just wouldn’t happen for him thanks to the superior straight line speed of the Renault.

Kimi Raikkonen could only manage 14th in his record equaling 322nd race start but his teammate Giovinazzi in the other Alfa Romeo would be very happy with his race result at P11, just missing out on the points. Haas also registered one decent result with Magnussen at P12, ahead of a works Ferrari but they would quickly want to forget the P17 salvaged by Romain Grosjean. Both the Williams finished with Latifi at P16 and Russell at P18, with what was an unusual 3-stop race for the English driver, with the last stop seemingly an ambitious attempt for a fastest lap. It was however not there for the taking as Bottas eventually ended up with the point on offer.

In what was expected to be the 91st win for Lewis Hamilton, the race win went out of the window thanks to the pre-race events. His teammate jumped in at the chance to take maximum advantage to cut the gap in the championship standings to 44 points with a handful of races to go. Hamilton will now have to be careful for the next 4 races as he has picked up 2 penalty points today and two more would mean that a race ban would be handed to him, which could seriously dent his championship hopes. 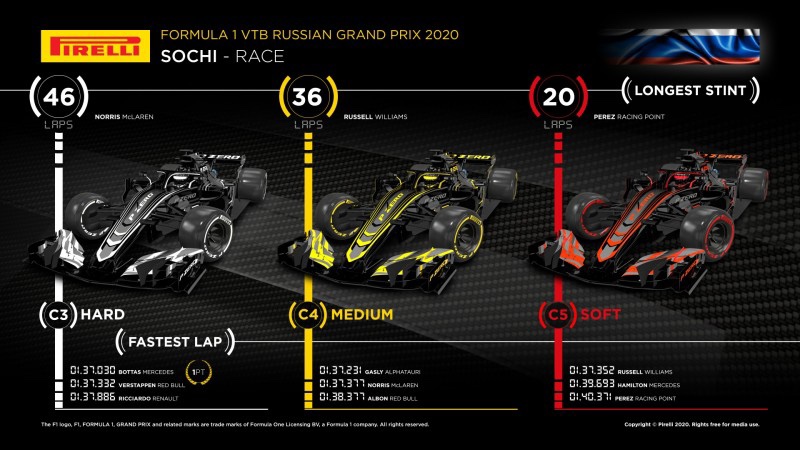 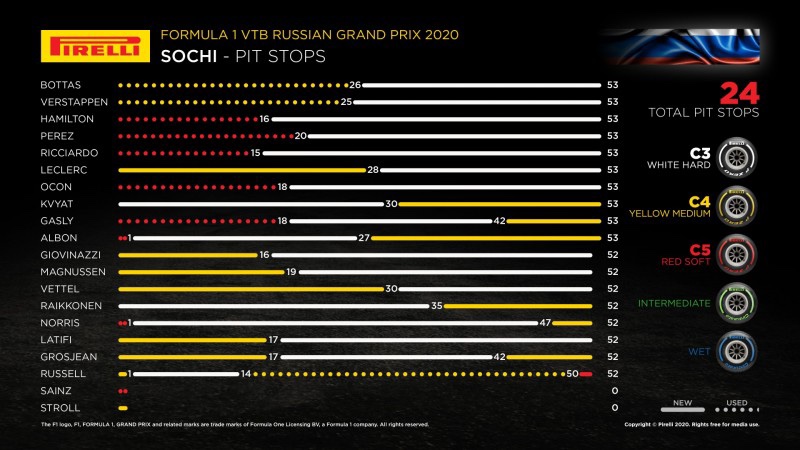