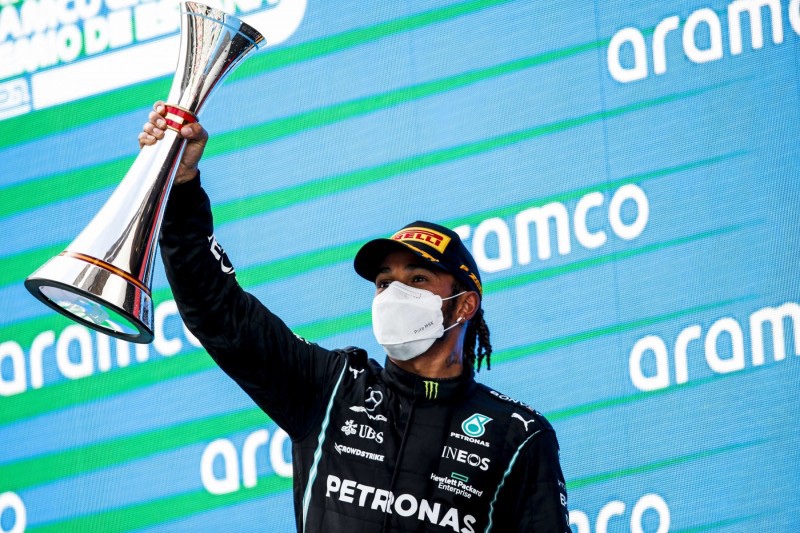 Lewis Hamilton took his 98th Formula 1 win on Sunday afternoon after delivering yet another stunning drive which was strategically very reminiscent of Hungary 2019. The English driver started from his 100th pole position and fell behind to his title rival Max Verstappen but thanks to an aggressive and well thought out strategy from the Mercedes team, he was able to come back into the race and take the lead towards the very end and went on to win.

Hamilton’s teammate Valtteri Bottas was once again limited to playing the team game as he failed to match either of Hamilton or Verstappen. The Finnish driver did not quite back down after team orders were implemented which meant Hamilton had to overtake him losing some time in the process. It all ended well as the English driver was able to catch the leading Redbull and take a healthy lead in the driver’s championship. Sergio Perez in the other Redbull could only manage only a 5th place finish which brings into question, the ever present dilemma surrounding the Redbull second car.

Charles Leclerc in the Ferrari drove an excellent race finishing 4th ahead of Sergio Perez in the Redbull which means it is good signs for the Ferrari after a season to forget last year. Carlos Sainz in the other Ferrari also had a very good drive after his battles with the McLaren drivers saw him finish 7th. Daniel Ricciardo in the McLaren seems to have gotten over his shaky start to the season and drove an excellent race to finish P6 while his teammate Lando Norris just seems to have taken foot off the gas after a good start to the season and managed an 8th place finish only.

Esteban Ocon started off the weekend in a brilliant fashion after qualifying P6 but could only manage P9 in the race while his teammate Alonso after being involved in the tussle for the final points position for a long time had to pit towards the end and ended up at a lowly P17. Alpha Tauri had a mixed weekend after Yuki Tsunoda’s car had an engine failure very early in the race but Pierre Gasly managed his race well after he had to overcome the challenge of Aston Martin drivers.

Aston Martin had a very under the radar showing with both the drivers Stroll and Vettel finishing outside points and the team will be left to figure out how to better their fortunes in a fortnight’s time for the Monaco grandprix. It was a better outing for Kimi Raikkonen in the Alfa Romeo than last time as he finished the race this time around and finished well at P12. His teammate on the other hand had to sit through a sub 40 second pit stop and could only manage a P15.

‘Mr.Saturday’ George Russell had yet another mellow Sunday interms of the result but the whole team will definitely take heart from a performance where he was close to P10 for the most of the afternoon but failed to put the final fight in for it and finished P14. His teammate Latifi in the other Williams finished at P16.

Haas cars had yet another slow outing during the race and Mick Schumacher managed an 18th placed finish despite a bright start from him and his teammate Nikita Mazepin only finished last of the lot while often being mentioned in the radio for not following the blue flags correctly.

Redbull definitely seemed to have the pace going into the race but they were caught out by Mercedes’ aggressive strategy just like Hungary 2019 as Lewis Hamilton drove his heart out in Barcelona. Max Verstappen will have many more chances in the upcoming part of the season to take the challenge to Hamilton on track but for now the momentum is with the British driver.