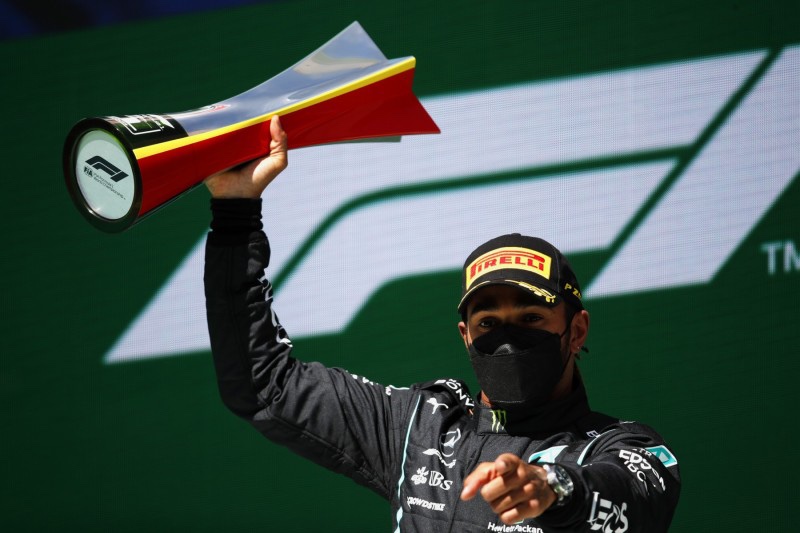 Lewis Hamilton took his 97th career win at Portimao on Sunday afternoon after fending off the challenge from his teammate Bottas and Redbull’s Max Verstappen. The English driver started 2nd on the grid behind his teammate Valtteri Bottas and got off to a steady start. He was later jumped by Verstappen at the early safety car restart and was running 3rd at one point. Hamilton then made his way back into the race in fiery fashion after picking off both Verstappen and Bottas on the main straight and never looked back once he was in control.

The race saw a very early safety car brought in on lap 2 after both the Alfa Romeos tangled on the main straight with Kimi Raikkonen losing the front wing in the process. The Finnish driver then had to retire while his teammate managed to stay on. It was a good restart from the other Finnish driver in the Mercedes which enabled him to open up a gap over the drivers behind him. The race was not the one to remember for him however as he was later on overtaken by both his teammate and Verstappen. A little comfort for him was that the final pitstop made towards the end of the race enabled him to grab the fastest lap and the extra point from today’s outing.

Redbull ended their day where they started on the grid with Verstappen at 3rd and Perez at 4th but would have hoped for much more from the race, especially with the car looking quick enough to challenge Mercedes this year. Verstappen was initially awarded the fastest lap of the race towards the end but the lap time was deleted thanks to the Dutch driver exceeding limits at track 14. His teammate Perez ended his race at 4th after having a super long first stint on medium tyres for 53 laps and went with soft tyres for the rest of his race.

It was yet another top 5 finish for Lando Norris in his McLaren as his excellent start to the season continued. The English driver was mega at the restart and battled Alpine’s Esteban Ocon to jump places. His teammate Ricciardo in the McLaren also bounced back from a poor show in qualifying on Saturday and finished in the points at 9th place after a stellar drive.

Ferrari had a mixed showing at the grandprix, mostly brought upon by themselves as Leclerc finished at P6 after starting 8th and Carlos Sainz despite having a good start, only managed P11 after a questionable strategy call from the team. The Italian outfit will however take heart from their showing compared to the kind of season they had last year.

Alpine managed a double points finish with Esteban Ocon in 7th and Fernando Alonso in 8th after excellent drives from both the drivers. Alonso turned the clock back years with some fine overtaking moves while Ocon showed why he deserves to be in F1. The final place in the points belonged to Pierre Gasly who had a decent race and managed to finish 10th while his rookie teammate Yuki Tsunoda could only manage a 15th placed finish.

With Kimi Raikkonen retiring as early as lap 2, Alfa Romeo had only one car finishing the race with Giovinazzi at P12 after the Italian driver managed to pull some moves towards the end of the race. Aston Martin could only manage out of points finishes for their drivers with Vettel finishing P13 and Stroll finishing at P14. The team will hope for a better performance in the coming weekend and will quickly want to turn their season around if they want to be anywhere close to where they were last year.

It was a poor showing for Williams on Sunday especially with George Russell starting at P11. The English driver could not manage to hold his place there during the course of the race and could only manage a 16th place finish while his teammate in the other Wiliiams only managed 18th. Haas will be very disappointed with their result after Mick Schumacher could only manage a 17th place finish and his Russian teammate Nikita Mazepin finished last of the runners, with a whole minute behind his own teammate at one point during the race.

The season is definitely off to a great start with Redbull looking a lot closer to Mercedes than they ever were and with Lewis Hamilton’s dominance under threat from the ever hungry Max Verstappen, this could go on to be one of the classic seasons of F1.