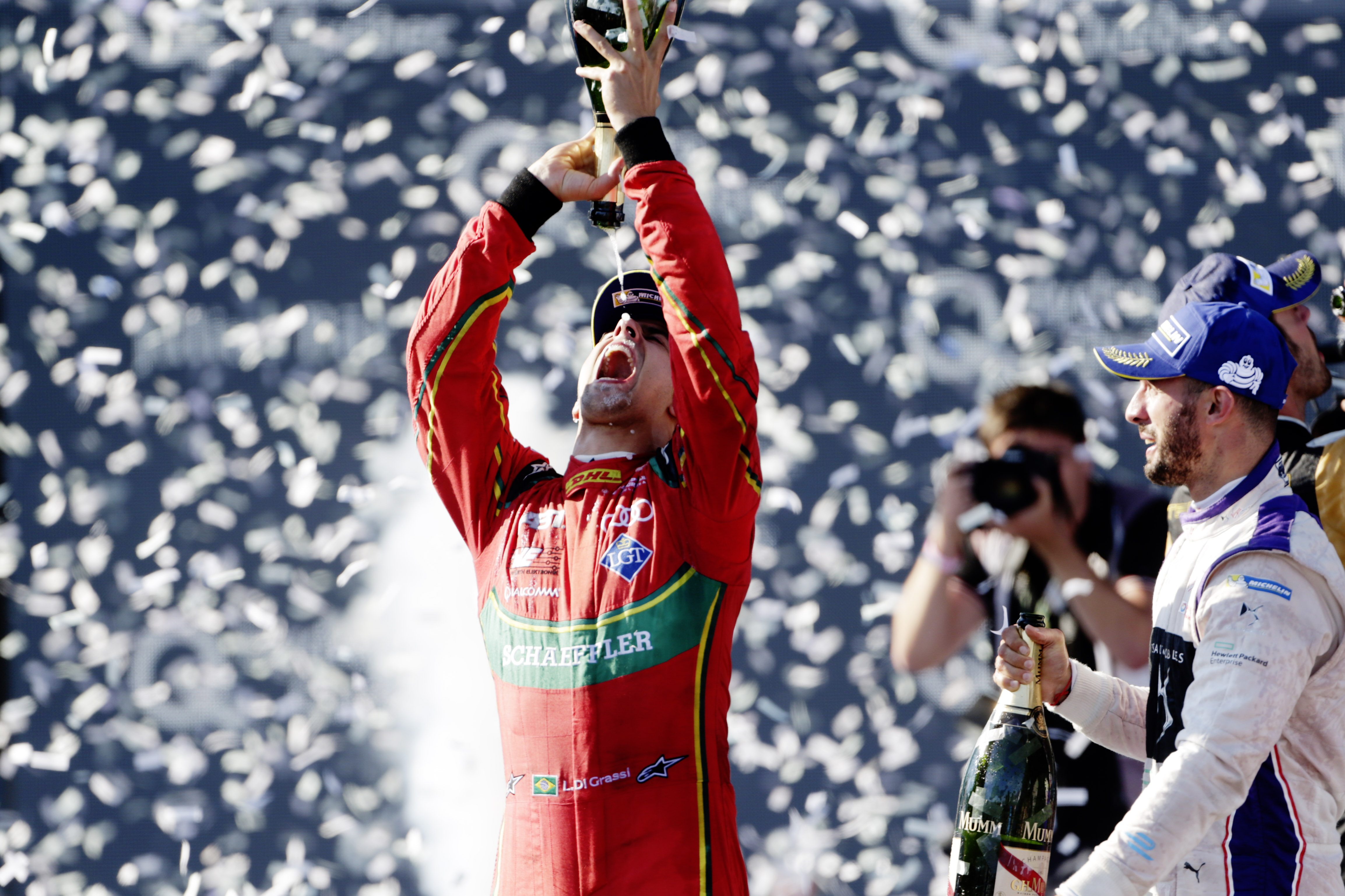 Going into the Canadian title decider, it was looking almost impossible for anyone but Buemi to take the top honours this season. The Swiss driver had been a man transformed by his first title win last season—opening up his defence with a hat-trick of wins, Buemi went on to claim victory in almost every race he contested, and such was his form that he still held the championship lead before Montréal despite missing the two previous races in New York City.

But on arrival in Canada, Buemi seemed like a different driver altogether to the one in control of his last ePrix in Berlin. An uncharacteristic off in practice saw him damage his chassis against the wall, denting his confidence ahead of qualifying and handing him a hefty grid penalty for race one; then, starting the race from twelfth, Buemi’s cautious approach left him right in the heart of the opening lap scrum, where he picked up steering damage from contact with Robin Frijns’ Andretti, which severely hampered his progress early on.

By contrast, di Grassi was having every bit the race he needed. His third pole of the season narrowed the championship deficit to just seven points, and after seeing off Jean-Éric Vergne at the start the Brazilian raced away into an early lead. He was then largely not seen again, and despite a late safety car bringing Vergne right onto his tail in the final laps, di Grassi took his second win of the season ahead of Vergne and Stéphane Sarrazin, and with it the lead of the championship by six points—this lead later became eighteen points, when Buemi was disqualified from his eventual fourth-place finish after his rebuilt car was found to be three kilograms underweight.

This stacked the odds considerably in di Grassi’s favour ahead of the second and final race of the weekend. All the Abt driver needed to do to clinch the title was finish ahead of Buemi, and even if his rival went on to win the race, any result within the top four would have given di Grassi enough points to become champion.

Nevertheless, Sunday did not start smoothly for di Grassi. A scruffy Super Pole lap left him only fifth on the grid behind Felix Rosenqvist, Sam Bird, Jean-Éric Vergne and Nick Heidfeld; di Grassi then dropped back at the start and was almost tagged by his teammate going through the first corner.

But compared to his title rival, di Grassi’s troubles were nothing. For the second time in Montréal Buemi started way down the grid, in thirteenth place after making a mistake on his flying qualifying lap. That once again placed him in the firing line at the first corner, and as the pack bunched up he was hit from behind in the braking zone, this time by António Félix da Costa in the sister Andretti. The contact was enough to dislodge one of Buemi’s rear wheel guards, and as it flapped loose from the back of his Renault the stewards called him in to the pits with a black and orange flag—by the time he rejoined the track, Buemi was in last place and his title hopes lay in tatters.

Meanwhile, as Buemi’s impromptu stop all but sealed the title for di Grassi, the front of the field was playing host to a tight race for the win between polesitter Rosenqvist and a charging Vergne.

The Frenchman had been able to eat into Rosenqvist’s five-second lead after saving the energy for a later stop, and partway through the second stint had no trouble breezing past the Mahindra for the lead. Vergne then set about using the remainder of his saved energy to ease clear of Rosenqvist—by the time the chequered flag fell at the end of lap 37, Vergne had built up a buffer of almost a second to seal his and the Techeetah team’s first Formula E victory.

Rosenqvist followed Vergne home in second, despite coming under further pressure from José María López in the closing laps, and with his fifth podium of the season triumphed in his battle with Sam Bird for third in the final standings; Bird himself crossed the line fourth ahead of Rosenqvist’s teammate Nick Heidfeld, who had fallen back from an earlier podium position.

Incoming champion di Grassi had been set to finish sixth, but with his title already secured he swapped places with teammate Daniel Abt on the final lap and finished seventh instead. Stéphane Sarrazin came eighth, Jérôme d’Ambrosio closed a difficult season for Dragon with two points in ninth, and Tom Dillmann took the fourth points finish of his rookie season with tenth. The final fastest lap of the season was set by Nico Prost, who finished outside the top ten for the first time this season and fell to sixth in the overall standings.

Renault e.Dams’ three non-scoring results in Montréal allowed Abt Schaeffler Audi to close up in the teams’ standings, though in the end the French marque still had twenty points in hand to take its third consecutive crown.

Mahindra finished its best Formula E season to date by beating DS Virgin to third, and in spite of numerous driver changes across the season Techeetah ended its impressive debut campaign as the fifth-fastest team ahead of NextEV NIO.

There were no changes in position with the final four teams—Andretti, Dragon, Venturi and Jaguar—even though each team scored at least one top ten finish this weekend. The latter two are unlikely to be disheartened by coming ninth and tenth, considering both have shown great improvement from starting the season well out of contention for the points; as for Andretti and Dragon, teams used to scoring podiums in past seasons, finishing down in the latter half of the table will leave much for the two American outfits to consider over the off-season.