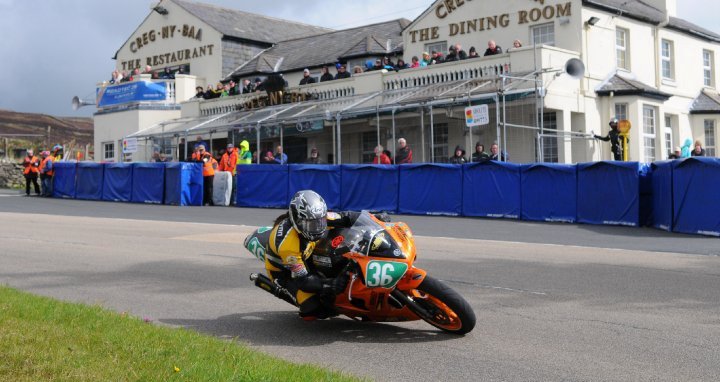 The first woman to race the famous Isle of Man TT course as a solo rider was Beryl Swain, in 1962. However, in those days a woman racing caused a huge upset in what was, and some may say still is, a male dominated world of motorcycle racing. So incensed were they by a woman taking part, a weight limit was introduced that Beryl could not meet, thus causing her license to be revoked, ending her racing career just as it was beginning. It was 1978 before the next woman (Hilary Musson) was allowed to compete in the TT, but women would not be allowed to race at the Manx Grand Prix until 1989. It would be almost 50 years between the first woman racing on the Mountain Course and the first female to win a race there.

That woman was Carolyn Sells, and in 2009 she won the Ultra Lightweight Race on the FZR400 Yamaha by Paul Morrissey racing. An ambitious no pit-stop strategy meant she came home with a 62 second lead, and a best lap of 107.780mph. Carolynn retired from racing in 2009, but is still heavily involved with racing in the Isle of Man, supporting Newcomers to the Manx Grand Prix. I’m really delighted she was able to take time out from her busy family & life to answer my questions.

Laura Sawyer: How old were you when you knew you wanted to race bikes?
Carolynn Sells: About 16, although I didn’t actually get around to it for another 10yrs or so!

LS: What path did you follow from starting out to racing at the Manx?
CS: My dad began racing at the Manx Grand Prix in 1985 and it was there that I decided that, one day, I was going to race there. At the time, women weren’t actually allowed to race in the Manx, but that didn’t even occur to me then.
Life got in the way though and after putting myself through Uni, progressing my career in TV & Film Design and then buying my first house, I finally got around to doing my first race on my dad’s TZ250 a month before I turned 27 in April 2000. I only did 3 meetings that year and then spent the next 2 years aiming to get my National Licence, in order to be able to compete in the Manx Grand Prix in 2003 – the year that I turned 30.

LS: How supportive were your family and were they behind you from the start?
CS: They were very supportive – dad lent me his bike and then bought my first race bike for me – but I can’t say that he entirely wanted me or my brother to race the roads really (my brother was a newcomer to the MGP at the same time as me). Dad had raced since I was 5 though, so he knew he didn’t get much say in the matter!

LS: You’re now a director of the Manx Motorcycle Club – how do you use that role to support newcomers to the Mountain Course?
CS: I’m not anymore, but I was for a few years. I am still a Rider Liaison Officer for the Manx and an Official ACU Mountain Course Coach, which means that I teach newcomers about the circuit and what to expect as a newcomer. It is something that I have been passionate about even when I was racing and my goal is to make sure that every newcomer thoroughly enjoys their first Manx and comes home safe and happy. If they’re fast too, well, that’s a bonus!

LS: Aside from the win, what is your next best achievement in racing?
CS: I think I achieved a fair bit in my short time racing (9 years) and I’m not sure I can pick just one…
I won a solo Motorcycle championship in the Isle of Man (2002) and I won a race at the International Southern 100 (2005) and am the only woman to have done either of those things. I am also still the fastest woman at 4 of the Southern Irish road circuits, despite not having raced there since 2008 and the likes of Maria Costello, and several others have been racing those circuits regularly since then.
Nothing beats my win on the TT Course though, not even close. That was the culmination of 6 years of steadily and quietly working my way up and focussing on the goal.
I also got a Guinness World Record for the win and won Isle of Man Sportswoman of the year too, so they’re pretty special to me.

LS: If you could race again, which meeting(s) would you do, and why?
CS: The TT and the Ulster Grand Prix… two things I really wish I’d done, but the timing was never right.

LS:  What was the best bike you rode competitively, and which bike do you wish you’d been able to race (past or present) and why?
CS: Although I had most success on the 400’s, I really did love racing the CBR600RR, it was the best fun and plenty fast enough for me. I always wish I’d had the chance to have a go on an RC30 though…

LS: You’ve always said you don’t consider yourself to be a woman in a man’s sport, and your achievements are certainly something any racer would be proud of. What advice would you give to women who may still feel nervous about progressing with their aspirations because they worry they may be disadvantaged by gender?
CS: I don’t believe that we are ever disadvantaged by our gender. If you want to do something, get up and do it. It really is as simple as that.