In November 2020, we said goodbye to one of the most iconic sights at the TT Grandstand on Isle of Man as the Scoreboard in its current form was dismantled and removed. It has stood in the same spot for over 100 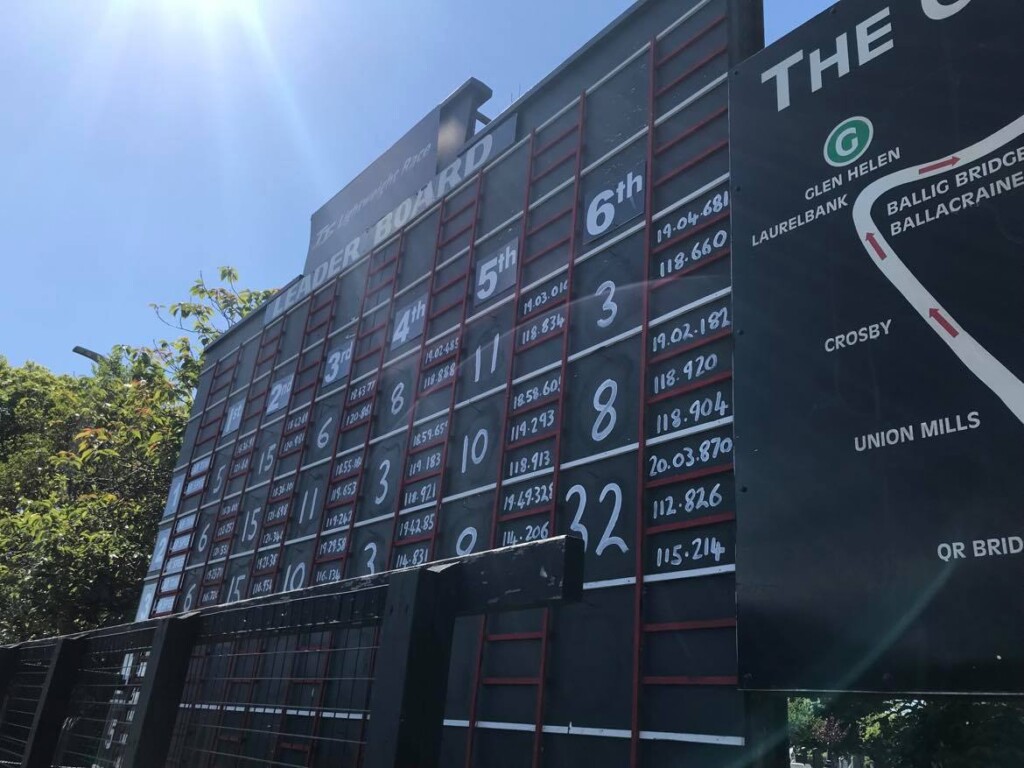 years (although it’s only since the 1980’s that it has remained there on a year-round basis – it used to be put up and removed before and after racing). It’s believed some of the parts that were removed were original, and actually dated back to the 1920’s, and it’s true that the structure has remained pretty much unchanged over the years. The main changes have been prompted by increased health and safety; for example the wire fence that protected the Scoreboard Team, the painters and the Scouts has only been there since 2015.

A lot has been written about the involvement that the local Scouts have had with the boards, but there’s not so much written about some of the other people who were involved in the smooth running of the traditional system. The painters were key – they painted the numbers on the slates (more about them later) as well as updated the Leader boards. The painters were all skilled workmen provided by a local painting decorating company – the job was put out to tender to ensure top quality work was undertaken. As well as the Scout Association and the painters, there were also a team of Race Officials who oversaw the boards – the Scoreboard Controller and his deputy dealt with the processing of the numbers, then the remaining officials would spread along the front of the two boards ensuring there were no errors, no gaps, and that everything was safe & secure. They had radio contact on each side with the Tower, so if any boards or times were wrong, they would get a call to let them know what needed to be fixed. However, in my experience of 5 years on the boards, I only ever got one call – it was a pretty slick operation! 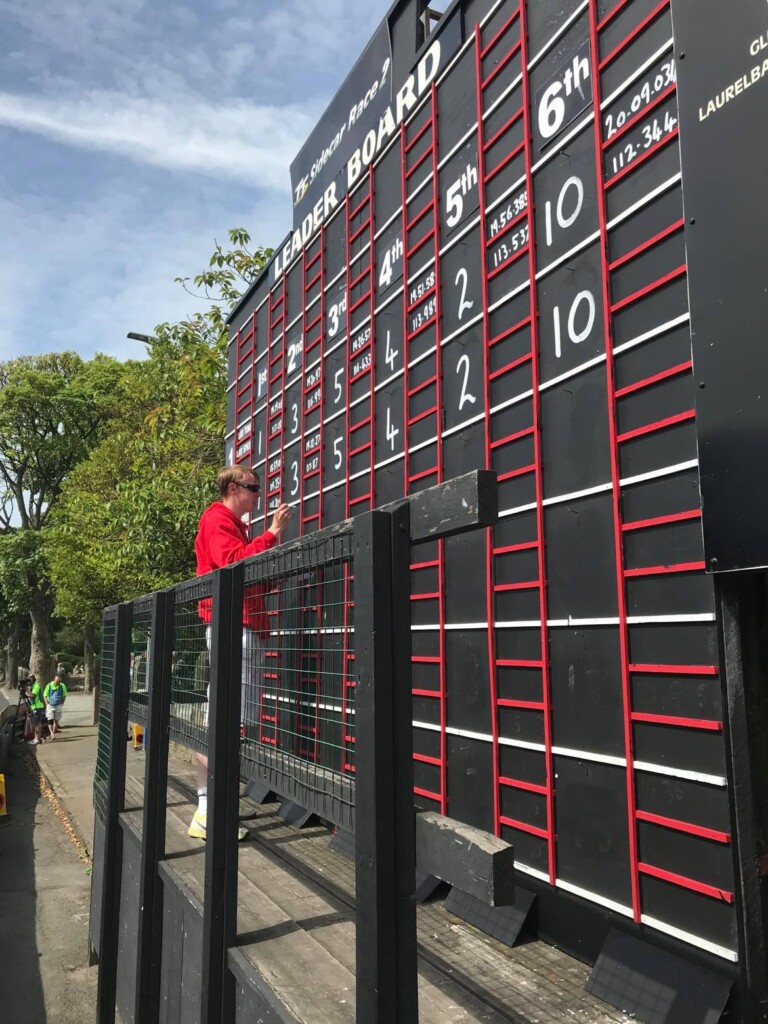 The Scoreboard consisted of two identical scoreboards – the north board and south board. They carried the exact same information but meant it could be viewed from the whole length of pit lane and the grandstand. There are no electronics allowed in pit lane, so being able to see the boards is the only way the teams know their rider is circulating and approaching for pit stops. Each board had a Leader board that would be updated with the bike number, lap time and average lap speed for the top 6 riders. The updates were made by one of the painter team as soon as the times were available. Most people know that the Scouts update the boards by posting the slates to the corresponding rider, but how did it all really work? Where did the numbers come from?

Before the start of every race, the painters would mount the tear offs (lap number packs) on each number. As each bike left the grandstand the top page was torn off to expose the number of the lap they were. As the riders circulated the course the scouts positioned at the top of the board would get a radio message whenever they went through Glen Helen, Ramsey, Bungalow and Grandstand and would turn the crank handle so viewers knew which of the points they had most recently passed. Just below the clock, a light would show when a bike reached Cronk Ny Mona. For the pit crews this was vital information – they would know to be prepared for the arrival of their rider in pit lane. Usually, they’d know which laps they would be expecting to refuel on but would always be on standby in case the rider came in with a mechanical concern – time was of the essence in the pits, races could be won or lost here! That light was switched on by a scout in the lightbox at the north end of the board. 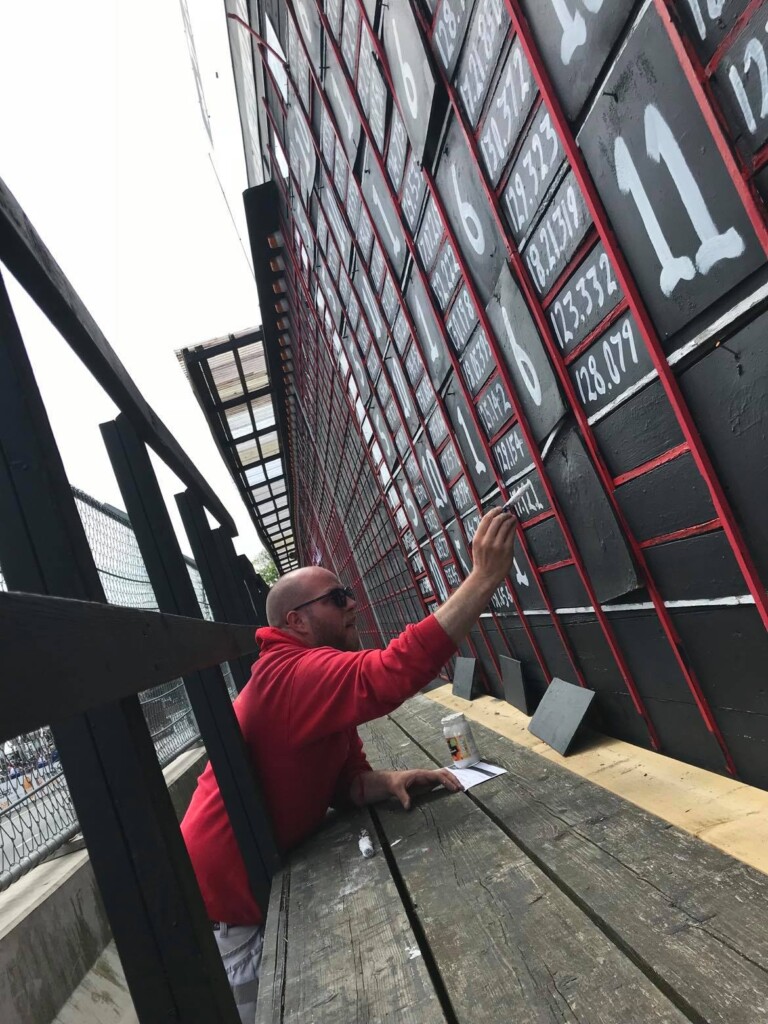 Once a lap was completed, the timings would filter through from the Timekeepers to the Scoreboard Controller, who would print and check them. The A4 page was split into 2 – one for North, one for South, handed to a waiting messenger, who would take it to the painters. The painters would be gathered around trestle tables stacked high with slates (the slates were actually black boards with a hole at the top). They would receive the paper and paint the time on the front of a slate. On the back, the rider number and lap number would help to identify where the slate would go next. The slate and paper would then be handed to another scout (runner) who would go to the relevant section of the board. There were gaps every 10 spaces (1 to 14, 15 to 25 and so on) so the runner would go to the slot for the rider number, knock on the board and post the slate through.

The next stage is the part watched by thousands of spectators over the years – the scouts out front would pick up the slate and paper, check all the details, scrunch the paper up and post it back to the rubbish bag, and then go and hang the slate. In the event of a retirement, the Scoreboard Controller received a call stating the rider number and the lap they retired on, and he would then complete a card for the scouts to take to the painters to swap for a Retirement board (white letter R) and pegs for blocking out the remaining laps. And that’s it! The process, as complicated as it looked to the untrained eye, was so simple and effective. It is hard to imagine life without the Scoreboard, but we can only wait now and see what replaces it.

Speaking to the team to understand a bit more about what attracted them to the role, they all talk about the sense of camaraderie. Race Official Joy Ellis says this was one of the things she enjoyed the most, alongside actually feeling like she was helping the iconic event run year after year. Another one of the team, Chris Ward speaks fondly of his memories of starting out as a cub scout, progression to being a race Official, and most recently over the last couple of years of racing Chris was Deputy Scoreboard Controller. He recalls ‘I worked the scoreboard as a cub and scout for many years. I started as a Messenger running the handwritten timing cards between the Timekeepers hut and the scoreboard controller (a role that no longer exists) and got to sneak a view of the bikes now and then through gaps in the scoreboard. From there I became a Runner delivering the painted timing boards through the slots in the back of the board.

I then moved on to Clocks and eventually Tear Offs on the front of the board, the most coveted role in those days in our bright white overalls (didn’t show the paint that we inevitable got covered in!).

Days of collecting every lap-time card that came from the Timekeepers hut through the system and delivered with the time slates to the front of the board. Pockets full of the things, collecting every lap time of all the big names, getting them signed after the races, loads of freebies from all the big teams. My bedroom was covered in new posters/postcards/stickers by the end of the racing. 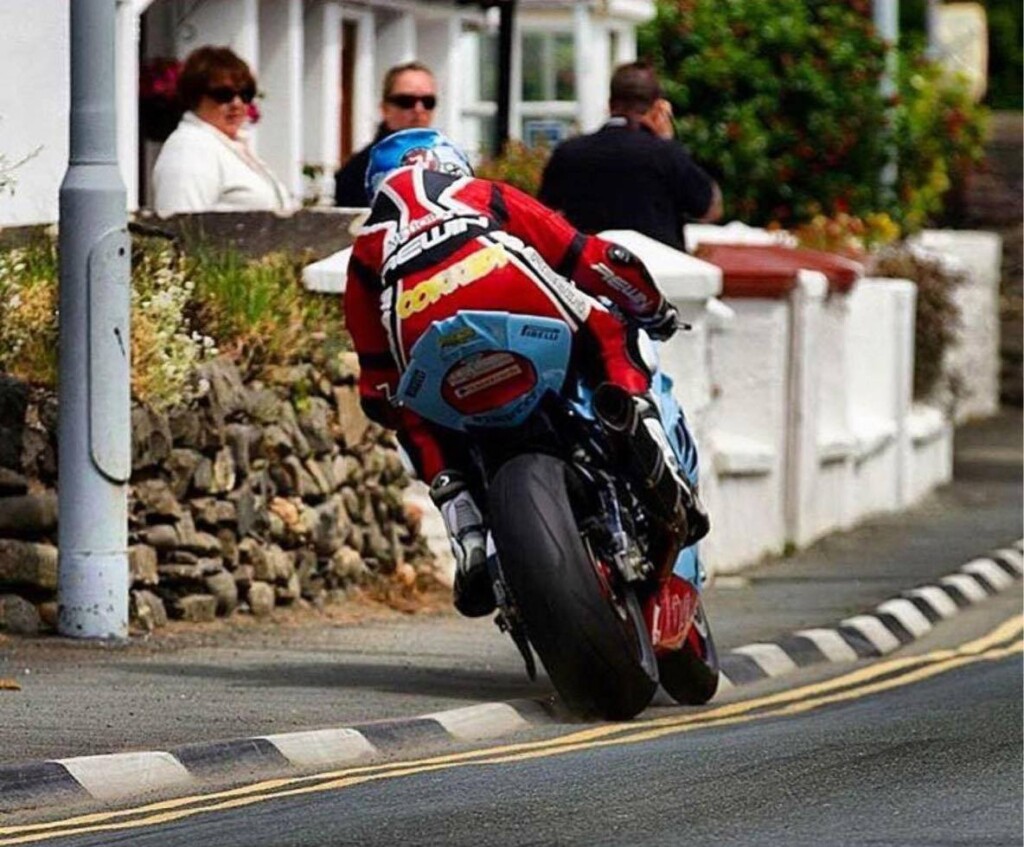 That came to an end during my GCSEs thanks to exams during TT fortnight.

After I came back from university, I was actually working underneath my car one day when the scoreboard controller at the time who had lived 2 doors down the road from my parents for years, came knocking and asked if I’d like to get back involved as an official. I said yes in a flash, didn’t need to think about it … just yes! I think that was 2005 and I’ve been there every year since…’

I asked the Scoreboard Controller, Brendan Byrne, what it was he enjoyed most about his time on the boards. His reply summed it up perfectly… ‘The people on my team. Watching a group of strangers volunteering and forming into a functioning unit linked by their affection of the TT/MGP’ 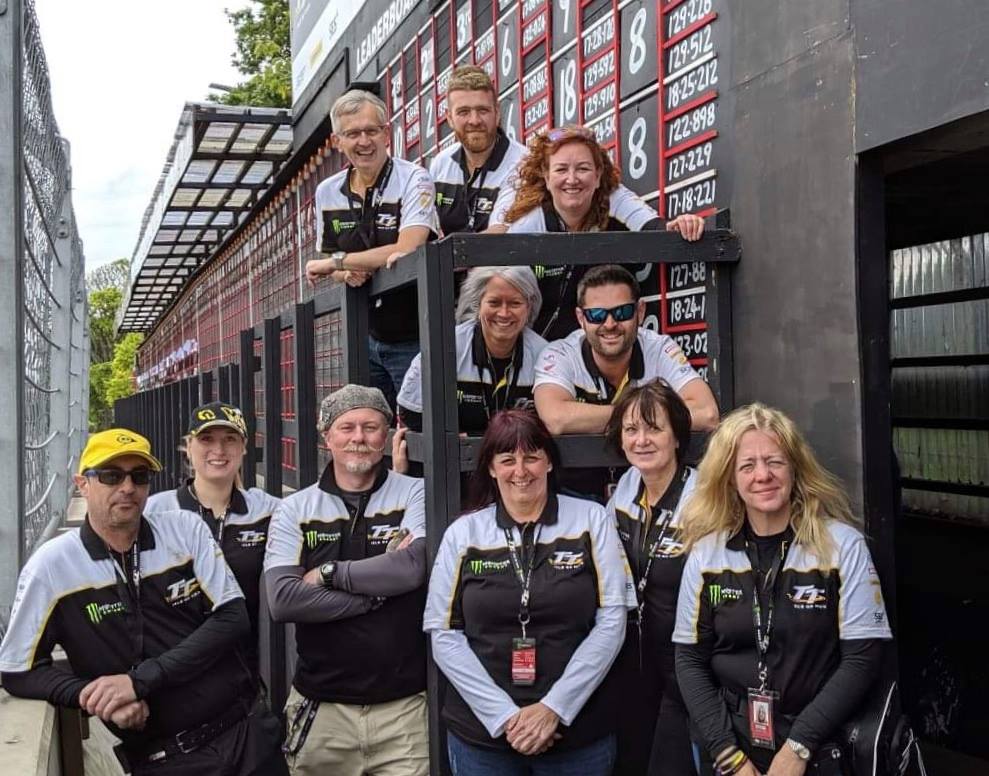 I’m sure I speak for most if not all of the team when I say we all felt the same – as with most people talking about the TT, the Scoreboard tells a story of history, excitement, sadness but most of all great friendships formed over a love of racing.