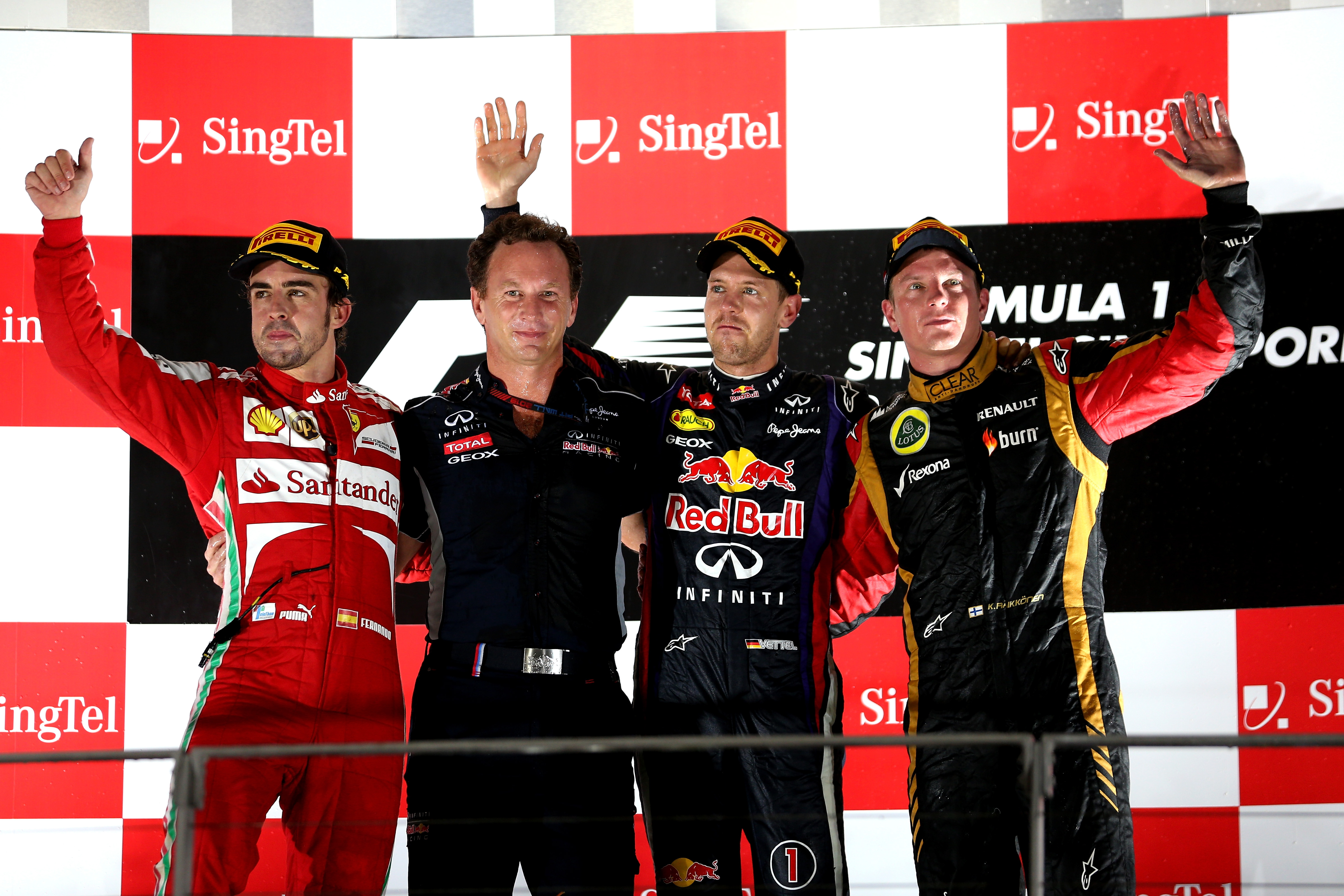 Two of the best drivers on the grid battled several times, each other for the title of the world champion. Fernando Alonso is a two time world champion currently racing for McLaren-Honda, before that he was a test driver for Benetton, joined Minardi in 2001, Renault was his next station from 2003 to 2006, then signed a contract with McLaren where he raced for only one season and returned back to Return in 2008. Fernando’s next step was Ferrari, from 2010 to 2014. In 2015, he returned to McLaren and he is racing there since now.

The Spaniard, while he was racing for Renault, finished first on the drivers’ championship for two consecutive years. Nando, won his first title in 2005 and the following season celebrated his second and final title.

Vettel born in Heppenheim on July 3rd, 1987, at his early steps as a Formula One driver, Sebastian joined BMW Sauber as a test driver and made his official debut at the United States Grand Prix in 2007, then he signed a contract with Toro Rosso and remained there until 2008. The next stop in his career was Red Bull Racing, during his period with the Bulls he celebrated four championships (2010, 2011, 2012, 2013). In 2015, the German fulfilled his childhood dream, signed a contract with Scuderia Ferrari and he is still racing for Ferrari alongside Kimi Raikkonen.

Fernando Alonso and Sebastian Vettel fought each other for the championship while they were racing for Ferrari and Red Bull respectively. Two times Fernando was very close to beat Vettel and win the championship with Ferrari, the first was in 2010 and the second was two years later in 2012. The Spaniard wished to become David and finish ahead of his opponent, but unfortunately Goliath was stronger, and Red Bull was unbeatable those years.

In 2010, Sebastian Vettel finished first in the drivers’ championship, the difference to his rival Alonso, was just four points. The German scored 256 points, whilst the Spaniard collected 252 points. In 19 races Vettel and Alonso were fighting wheel to wheel for the world title, during those races Sebastian retired three times and finished out of the points only in Belgian Grand Prix. Furthermore, Vettel won five races same number of victories with his opponent Fernando Alonso.

From the other hand, Fernando Alonso retired in Belgium, didn’t finish the Malaysian Grand Prix and finished out of the top ten at Silverstone. In the last six races of the 2010 season, Nando won three Grands Prix and finished twice third. Fernando played his final card for the championship in the last race of the season in Abu Dhabi.

A thrilling race took place in Yas Marina, before the race, Fernando Alonso was leading the drivers’ championship with 246 points, followed by Mark Webber and Sebastian Vettel which collected 236 and 231 points respectively. Lewis Hamilton had also mathematical chances to win the title as he had 222 points and he was 24 points behind Fernando Alonso. The Spaniard, had to secure the first two places in order to win the title without having to consider the other results.

On Saturday’s qualifying, Sebastian Vettel secured the pole-position, Lewis Hamilton was the second quickest driver on the grid and Fernando Alonso took the third position followed by Jenson Button and Mark Webber. At the first lap of the race, Sebastian Vettel was leading the race, followed by Hamilton and Jenson Button. Alonso had a slow start which cost him the third place and dropped him down to fourth. After the first pit-stops, Alonso re-joined behind Petrov. Fernando was on hard tyres and Petrov had already done his pit-stop, Alonso couldn’t overtake Vitaly. Even when the Spaniard tried to attack the Russian, Petrov was always in position to defend his position.

Sebastian Vettel led the race all the way, Lewis Hamilton finished second, Jenson Button third, and Fernando Alonso, after 40 laps of battling with Petrov, finished seventh. That result was enough for Sebastian Vettel to secure his first world title in his Formula One career.

In 2012, the two drivers crossed their swords once again. Sebastian Vettel and Fernando Alonso fought closely, but at the end the Germans always win. Vettel scored 281 points in 20 races, whilst Alonso scored 278 points. The German, finished five times on the top step of the podium, retired in the European Grand Prix and finished out of the points in two races, the first was in Malaysia and the second in Italy.

Fernando Alonso, won three races during the season and finished ten times on the podium. The Spaniard, retired in Belgium and in Japan, but despite those two retirements he finished in the top-10 in the rest races.

In Italy, Sebastian Vettel retired on lap 47 due to failed alternator, after that race the German won four consecutive races, finished third in Abu Dhabi, second in the USA and sixth in the final race of the season in Brazil. In Brazil, Sebastian Vettel needed to defend his 13 point lead in order to secure his third championship. The fourth position, would be enough for Sebastian to give him the title, even if Alonso won the race.

Fernando Alonso, qualified eighth whilst Sebastian Vettel set the fourth quickest lap on the grid and placed behind Hamilton, Button and Webber. The rain altered everything during the race, the teams were confused about which strategy would be correct for their drivers. On lap 23, the safety car deployed, Sebastian Vettel and Fernando Alonso were fifth and fourth respectively. The damage on Vettel’s car didn’t allow him to set a quick dry laps, few laps later the rain forced all the drivers to pit for intermediates.

Hopefully, one day we will see these top two drivers to fight, once again, each other for the title.