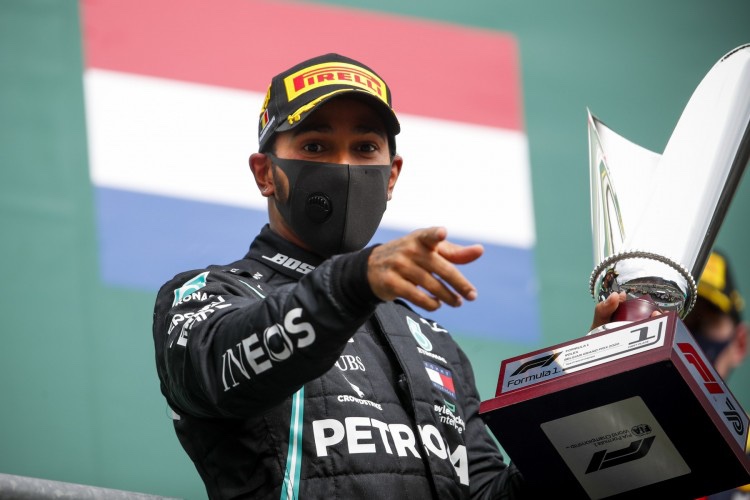 Lewis Hamilton took his 5th win of the season and 89th win of his career on Sunday afternoon in Spa on a day that called for very high tyre management. The Englishman started on pole and had to fend off an early challenge on lap one from his teammate and Max Verstappen. Once he was out in front, it was rarely any challenge apart from managing the tyres which were falling off at the end.

Both him and his teammate Bottas pitted under the safety car around lap ten during a safety car brought on due to Giovinazzi losing his rear and ending up in the barriers while collecting George Russell in the process. The Mercedes duo put on hard tyres like pretty much the rest of the field and limped to the end to finish 1-2.

Max Verstappen of Redbull failed to mount a challenge to the Mercedes after he was put on the same hard compound tyres following the safety car and he had to go into management mode as well. The outright winners of the race apart from the top 3 has to be the Renault sport team after Daniel Ricciardo drove a mega race to finish P4 and take the fastest lap in the process while finishing only 3 seconds behind Verstappen.

His teammate Ocon pulled off a last lap overtake on Red bull’s Albon to finish 5th and the team will be very much looking forward to Monza given the similar characteristics of the Italian circuit. Albon has to be content with 6th after a different strategy call from his team saw him finish the race on mediums which put him at a disadvantage towards the end.

McLaren had a mixed raceday after Carlos Sainz’s bad luck followed him to Spa this weekend. The Spaniard failed to even make it to the grid following an exhaust failure while bringing the car on to the track and will be hoping for something to go his way during next week. The other McLaren of Lando Norris put on a decent show after he finished 7th towards the end passing Lance Stroll on the way and putting up a fight with Albon and Ocon for 5th.

Pierre Gasly certainly put in a driver of the day performance after starting the race on the hard tyres and choosing not to stop under the safety car which enabled him to be on fresher tyres towards the end of the race. The Frenchman definitely made most of this strategy and put in some brilliant moves, especially one up the Eau Rouge onto Radillon on the inside vs Sergio Perez. This saw him finish 8th despite starting outside the top 10 and earned him some well deserved points. His teammate Kvyat in the other Alpha Tauri finished 11th after a quiet race.

Racing Point had a very average race following a similar qualifying and they will be left pondering on the loss of the really good pace that they have been showing so far in the season. Sergio Perez finished in the final points spot at 10th despite trying a different strategy to his teammate Lance Stroll who finished 9th.

Ferrari had a similar, if not worse race compared to qualifying after both the drivers swapped their qualifying positions with Vettel finishing 13th and Leclerc finishing 14th. Leclerc got off to a great start and put himself in 9th place before eventually losing places lap after lap. His pitstop under the safety car did not go according to the plan as well and he had to spend more than 30 seconds in the pitlane. As if this wasnn’t enough, he was then called in for an unexplained pitstop which left him visibly disgruntled on the radio, akin to his teammate.

It was not a completely bad day for the ferrari powered cars after Kimi Raikkonen in the Alfa Romeo finished 12th ahead of both the works Ferraris while passing one of them on the track in a straight fight. Both the Haas cars finished with Grosjean at 15th and Magnussen at 17th after another very underwhelming weekend for the American team. Latifi finished 16th in the only remaining Williams after his teammate was taken out by a crashing Giovinazzi much earlier in the race.

With the promise of rain yet again not being fulfilled, Spa did not deliver the quite the race every F1 fan had hoped for. Mercedes and Hamilton would not be complaining to much after finishing 1-2 yet again and hamilton extending his lead at the top to 47 points over Verstappen. Renault will be the ones looking forward to another power hungry track in Monza while Ferrari might not be missing the Tifosi too much given how they have been performing so far this season.