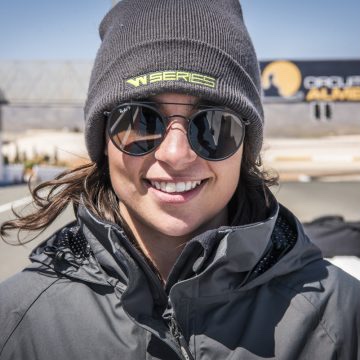 2020 was meant to be the second year of the all-women’s single seater championship, the W Series. It was going to give out superlicence points with 15 going the way of the champion, and it was due to have eight rounds with the last two supporting the F1 Grand Prix in the US and Mexico. However due to the COVID-19 pandemic which has compromised a lot of motorsport series this year, the W Series was one of those hit the hardest and subsequently has delayed its second season until 2021.

This has of course thrown a spanner in the works of many of the 18 women who were due to compete, one of whom was the inaugural champion Jamie Chadwick. The 22-year old from Somerset had an incredible 2019, with some notable achievements including becoming an Aston Martin factory GT driver, a Williams F1 development driver, being a finalist in the Aston Martin BRDC Autosport award, winning her class at the Nürburgring 24 hours and along with winning the W Series, she also won the MRF Challenge winter series. Chadwick also finished fourth with a race victory in the most recent Asian F3 championship, won a race in British F3 and won the GT4 class championship in British GT back in 2015.

So with nothing in place for a 2020 campaign, Chadwick was invited to participate in a test day for the Formula Regional European Championship with the highly successful Prema PowerTeam in place of Roman Staněk. The Czech driver raced last year in a dual ADAC F4 and Italian F4 campaign with US Racing, taking two wins and fourth in the German championship and one win on his way to fifth in the Italian championship.

Staněk was due to race with Prema in Formula Regional but has had to pull the plug due to potential budgetary issues. Chadwick will take his place in the team having recently earned the backing of a company called Rodin Cars, who develop trackday single seater experiences with their FZED model, based primarily on the Lotus Exos T125.

The Formula Regional European Championship utilises the same Alfa Romeo-powered Tatuus F3 T-318 that Chadwick used in both the W Series and in Asian F3, and she has got a golden opportunity to shine as she is in the best team. Last year was the inaugural season of Formula Regional, Prema dominated with their three drivers occupying first, second and fifth in the championship, with 2019 champion Frederik Vesti now set to race in the Grand Prix supporting FIA Formula 3 championship again with the dominant Prema outfit.

Chadwick will undoubtedly face stiff competition in the form of teammates Arthur Leclerc and Gianluca Petecof, both of whom are part of the Ferrari Driver Academy and finished rather strongly in their F4 campaigns last year. The season will consist of eight rounds, the first of which takes place on the weekend of August 2nd at the Misano circuit in Italy, the season will end at Vallelunga on the weekend of December 6th, and along the way, they’ll also visit Paul Ricard, Red Bull Ring, Mugello, Monza, Catalunya and Imola.

This could be a make or break year for Chadwick, it’s very possible she could do very well or be shown up by her younger teammates. Either way, this is a great chance for Jamie to show that she could be a great prospect for F1 in the future.