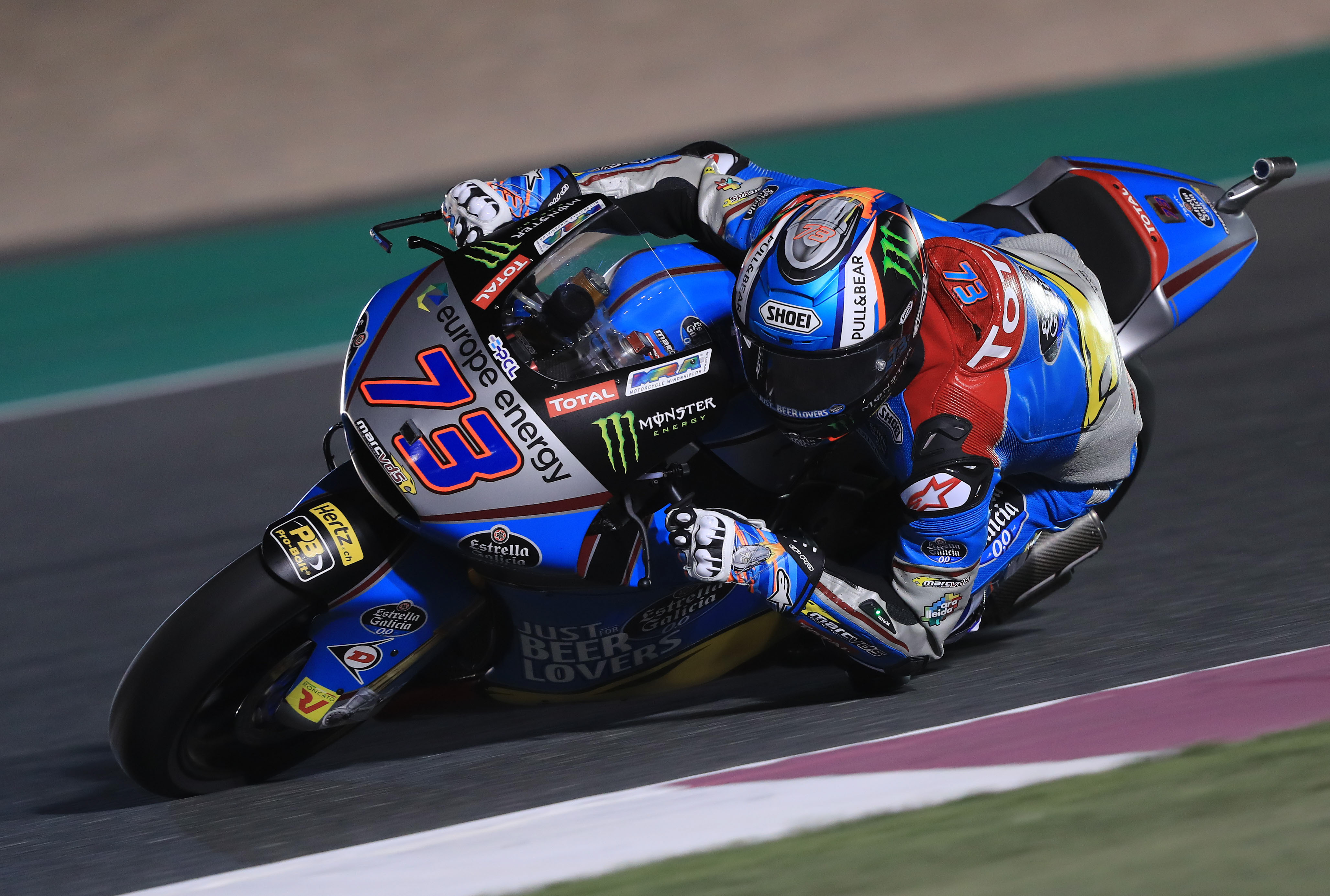 The remnants of the sandstorm, which plagued the Moto3 qualifying session, was one of the key challenges which greeted the riders as the intermediate class hit the track. With dust being blasted around the circuit, grip levels were inconsistent, ensuring that the competitors spent the first half of qualifying trying to create a clean racing line. There was also the matter of poor visibility in the twilight, before eventually the floodlights took over.

Marquez (Estrella Galicia 0,0 MarcVDS) has looked imperious across the weekend so far. Fastest man throughout practice, the young Spaniard proved the master of the difficult conditions setting a best time of 2″00.299 to ensure he starts the race from the front. Furthermore, he secured pole position by 0.3s ahead of his nearest rival. An achievement which should not be overlooked, as Marquez set his time alone on track, without the aid of a slipstream tow down the 1 kilometre long main straight.

Securing the remaining places on the front row are Italian riders Lorenzo Baldassarri (Pons HP40) and Francesco Bagnaia (Sky VR|46). The former has been one of the surprises of the weekend, finishing inside the top 5 across the three practice sessions and rising to the occasion under the lights in qualifying. He will start in P2 on Sunday. Bagnaia once again demonstrated his raw ability over a single lap to secure third place on the starting grid, yet also chalked up 17 laps across the session gathering invaluable data for Sunday’s race.

Undoubtedly the surprise of the session was Danny Kent (Beta Tools Speed-Up Racing). The British rider has returned for a third stint in the intermediate class, and could not have hoped for a better start to his 2018 campaign. His best time of 2″00.965 secures him P6, and a place on the second row alongside Miguel Oliveira (Red Bull KTM Ajo) and Romano Fenati (Marinelli Snipers Team) in P4 and P5 respectively.

Jorge Navarro (Federal Oil Gresini) and Mattia Pasini (Italtrans Racing Team) will head up the third row of the grid. Navarro has steadily been making improvements over the winter, following a testing maiden season in Moto2 last year. Pasini will not be too worried starting from P8 on Sunday. The veteran Italian traditionally almost forgoes any thought to setting the bike up for a single lap, instead focusing every practice session on getting his machine right for the 20 lap race. The pair are joined on the third row by German rider, Marcel Schrotter (Dynavolt Intact GP), who will start in P9.

Concluding the top ten for Sunday’s race is Sam Lowes (Swiss Innovative Investors), who will be disappointed to have only been able to secure tenth place on the grid. The 27-year old has been looking good however through the practice sessions, suggesting that he will be able to force his way up the order come race day.