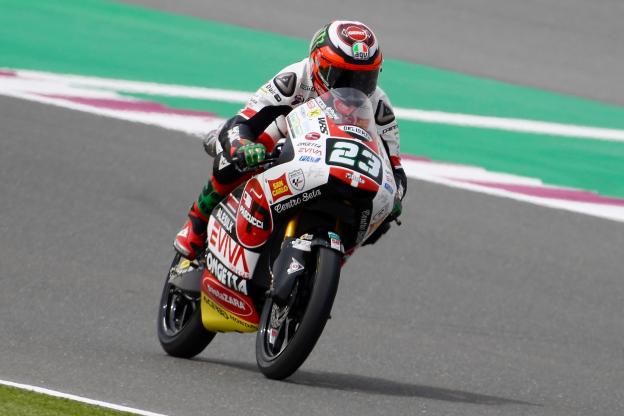 The conditions for today’s Moto3 qualifying session were difficult for all the riders, as a relatively thick cloud of sand descended on the Losail International Circuit. Visibility was quite poor on track, and to add to that the wind was very strong, and the track was extremely dirty.

The rider who best dealt with the conditions was Jorge Martin. He had pole in the bag, his lap was about as good as it could have been in those conditions, but he only managed second place on the grid for tomorrow’s race.

Niccolo Antonelli snatched pole position at the very end to take the SIC58 Squadra Corse’s first pole position in the World Championship, and he did it with the assistance of a perfect tow down the front straight – it was this that set his and Martin’s lap apart, by the gaping chasm of 0.001 seconds. The pole position was a welcome dose of enjoyment for the team, especially after Tatsuki Suzuki had to pull out of the weekend after injuries sustained from a crash on Friday morning.. Of course, Antonelli’s most recent victory came in Qatar back in 2016, when he was considered a championship contender, but even still it is probably Martin who enters tomorrow’s race as the favourite, having been the most consistently fast rider throughout the weekend.

Gabriel Rodrigo will begin his 2018 Moto3 World Championship from third on the grid, and it must be said that his lap was not a fluke – he has been quite fast all weekend, and all through qualifying. If he can keep his right hand in check tomorrow, he could be on for a maiden podium.

The second row is headed up by Ayumu Sasaki on the Petronas Sprinta Honda. Last year, Qatar was Sasaki’s first race of his full-time Grand Prix career (he debuted at Sepang 2016, replacing Enea Bastianini at Gresini), and he looked good too, finishing inside the points and ahead of the likes of Nicolo Bulega, so tomorrow could be a very good day for the young Honda star.

Kaito Toba enjoyed his best career qualifying with fifth place. The Japanese had a tough rookie season in 2017, but looks to have started his second season in Grand Prix racing in a much better way. If he can manage to stick with the leading group tomorrow, he could learn a lot about racing at the front against the best riders in the world.

Marco Bezzecchi impressed with sixth place. The Italian has flown a little under the radar coming into this season, after a quiet 2017 aboard the CIP Mahindra, but has been floating around the top five all weekend and could provide a real upset tomorrow.

Aron Canet fronts row three in seventh place. A relatively lowly qualifying position for Canet is not the end of the world for him, considering the amount of slipstreaming that is likely to occur on the pit straight tomorrow, but he has left himself in a dangerous position for turn one tomorrow, especially with it being the first race of the season.

Eighth place is occupied by Philipp Oettl, who not for the first time paid the price for his preference for riding alone, instead of in a group. The final piece of the row three puzzle is Lorenzo Dalla Porta, who might have been higher if his teammate Enea Bastianini didn’t hit his rear wheel on the entry to turn one.

That contact between the two Leopard teammates left Bastianini without a final attempt at improving his lap time and down in tenth place with a tough first few laps ahead of him for tomorrow. Jakub Kornfeil and John McPhee join Bastianini on row four.

Jaume Masia makes his full-time Grand Prix debut from thirteenth on the grid. We know from his performances last year that Masia can be a threat at the front in the race, and it wouldn’t be a surprise to see him battling for the top positions tomorrow. Andrea Migno lines up in fourteenth for the first Grand Prix of the season, and in the middle of a Bester Capital Dubai KTM sandwich on row five, as Marcos Ramirez goes off of P15.

Nico Bulega was a big disappointment in 22nd. After Friday he said he was happy with the work he and his team had done, but it looks to have been to no avail, as the tall Italian’s poor form from 2017 continues. To make matters worse for Bulega, his trademark awful starts will probably mean he will be pretty much last by turn one. Albert Arenas, one of the riders who fought with Bulega for the 2015 Moto3 Junior World Championship, starts from 23rd tomorrow, and rookie Makar Yurchenko goes from the back of row eight.

Reigning Junior World Champion Dennis Foggia was another disappointment as he could only manage 25th place after his fastest lap was cancelled for track limits. Tony Arbolino was yet another Italian frustration down in 26th place, which was completely unexpected after a strong preseason on the Snipers Honda. Finally, the grid for the first round of the 2018 Moto3 World Championship is rounded off by Nakarin Atiratphuvapat .