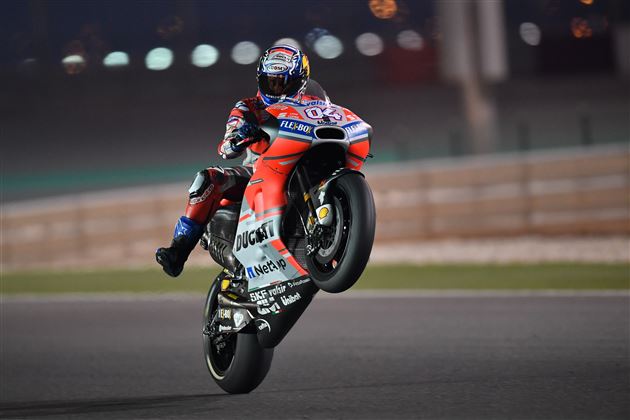 Andrea Dovizioso, at last, got the monkey off his back at the Losail International Circuit. In the last three years, the Italian has finished in second place at this venue. Today, Sunday March 18th, his time had come.

Under the floodlights of the desert circuit Dovizioso (Ducati Team) produced a stunning performance, calling upon all of his experience (179 grands prix contested), guile and tactical nous to emerge victorious.

Starting from the middle of the second row, the Ducati rider’s initial lunch was far from ideal. In the scramble to the first corner he was shoved and jostled down to seventh place, as the leaders initially threatened to clear off into the distance. Quickly composing himself, Dovi set about his task closing the gap back to the riders in front. Once he’d caught on he performed a series of methodical, perfectly executed overtake maneuvers. First disposing of Cal Crutchlow (LCR Honda Castrol) and Danilo Petrucci (Alma Pramac Ducati) at the long, ever tightening right-handed first corner, demonstrating his immense control and precision to the full. By lap 11 he had closed up onto the back of Marc Marquez (Repsol Honda), and the pair would duel it out for the honours for the remainder of the race. Not even a last corner lunge from Marquez would deny the Italian today. As was the case last season at Austria and Japan, the acceleration power of the Ducati was ultimately too much for the Honda on the long drag to the finish line.

Marc Marquez left everything on the track in his quest to end Honda’s drought at the circuit. Qatar has been a difficult place for riders charged with the RC213V machine. Since the event became a night race in 2008, the factory Honda team have only celebrated victory here twice. The defending world champion had looked strong all weekend, never outside the top ten in any of the free practice sessions, and the only factory rider to make it onto the front row in qualifying. The lack of straight line speed was always going to hinder the team, but Marquez’ commitment through the corners made up much of the deficit. There was no shortage of courage either under braking. Late in the race, the Spaniard back wheel briefly locked and skidded as he forced a way past Johann Zarco (Monster Yamaha Tech3).

MotoGP has a way of ripping up the proverbial form book from time to time, and today was no exception. Valentino Rossi (Movistar Yamaha) rounded out the podium places with a stunning ride to third place. Yamaha had been struggling all throughout the weekend in the sessions building to to the race, with the team seemingly unable to find any competitive setup for their bikes. The result of which led to both factory riders languishing in qualifying, with Rossi having to settle for P8 and on the third row. However, the nine-time world champion has long prided himself on his reputation as being a ‘Sunday Man’, and proved it once again. From the start Rossi carved his way towards the front, leading the likes of Marquez and Dovizioso early on, then holding off Crutchlow and Petrucci when the Yamaha’s tyres began to grain. Although today it was impossible for Rossi to contend for the win in the closing laps, the result is still a huge boost of confidence to the Japanese factory team going forward in the season.

The fight behind the podium finishers was fierce and unrelenting throughout the race’s 22 lap duration. Crutchlow (P4) was the first of the independent riders across the line, finishing ahead of Petrucci and comfortably clear of veteran Dani Pedrosa (Repsol Honda). Beating the latter will be particularly sweet for the British rider, given he is now also on equal machinery for the 2018 season. Petrucci will not be too disheartened even though his challenge faded in the closing stages of the race. The Italian has been one of the standout performers this weekend, fast across all the sessions, and his part dicing with Crutchlow and Dovizioso today will be well remembered. Who knows what might have happened if the race had been on a less abrasive surface. There is reason for plenty of confidence from the Pramac team as the world championship heads to Argentina. Alex Rins (Team Ecstar Suzuki) however, will be rueing today. The young Spanish rider secured his best grid position in MotoGP (P6) yesterday in qualifying, and for all money looked like he was on course to contend for a podium today. How cruel a mistress this sport can sometimes be. On lap 13, Rins braked off the racing line and the front tyre washed out from underneath him. The plumes of dust exploding from the track surface revealed that the rider had attempted to turn in from a point where there was no grip for the tyres. Under the lights and in the heat of battle, Rins could not have expected it. A cruel penalty which did not fit the crime.

A final thought must be spared for Johann Zarco. The Frenchman once again showed why he is rated so highly by both fans and the teams – Zarco has reportedly been approached in the last week by four different manufacturers eager for him to race for them next season. Starting from pole Zarco made the perfect launch and, although he could not break away from his pursuers, he led the way for 17 laps. Inevitably, tyre wear and fuel levels became serious issues. In the space of two laps, Zarco went from leading to P8 and having to fight off Andrea Iannone (Team Ecstar Suzuki). He did not appear overly disheartened after the race. The team know, as much as him, that it is only a matter of time before he breaks his duck in the premier class.