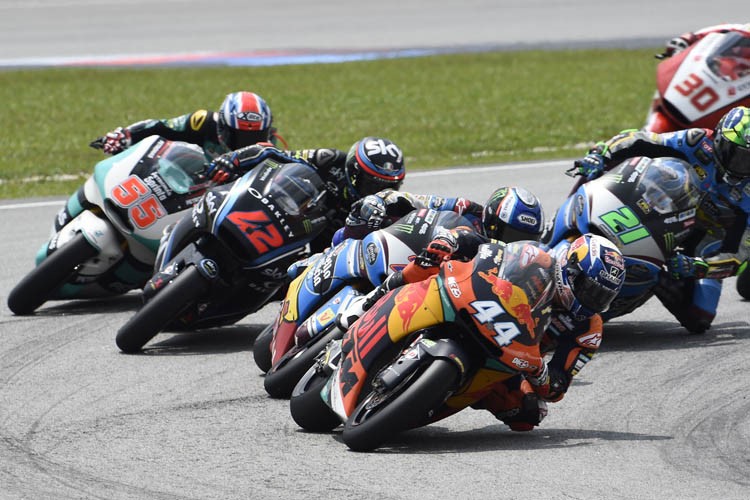 The intermediate class has garnered a reputation over the past few seasons as the hardest category to succeed in. How appropriate then should the new race schedule see the Moto2 field commence battle in the most challenging conditions of the weekend.

The race at the Losail International Circuit is set to begin at 1720 local time on Sunday, with sunset due at 1744. As such, we can expect a dramatic loss of track temperature during the closing stages of the grand prix, and ever changing levels of visibility with the setting sun before the floodlights take over.

The 2018 season looks set to begin with a plethora of riders all with realistic ambitions and expectations of being crowned world champion.

After a solid maiden campaign with the Red Bull KTM Ajo team last year, Portuguese rider Miguel Oliveira arrives at Qatar in the eyes of many as the favourite for the championship.  Having finished 2017 with a hat trick of victories at the final three rounds both he and the team have steadily made progress throughout the winter, with the focus been on gleaning an ideal race setup. This has been backed up by his teammate, the 2016 Moto3 world champion Brad Binder. The South African endured a troublesome campaign last year, owing much of this to an unfortunate series of injuries. However, following a full winter testing program he looks ready to join his teammate as a front running contender this season.

Francesco Bagnaia (Sky VR|46 Racing Team) stole the headlines during the winter, not just for his out right pace in testing. The Italian announced last month that he will be moving up into MotoGP from 2019. The move will see the 21 year-old become the second man from Valentino Rossi’s academy (after 2017 Moto2 Champion, Franco Morbidelli) to make it into the premier class. How we dearly wants to arrive there as a world champion, already.  Bagnaia is joined this season by compatriot Luca Marini, who moves across from the Forward Racing Team. Marini endured a difficult two years at his former team, and will be looking to make 2018 somewhat of a breakthrough season for him. Yet to feature on the podium in Moto2, the 20 year-old from Urbino needs to hit the ground running if he is not to be overshadowed by his teammate.

With Franco Morbidelli having moved up to MotoGP during the winter, Alex Marquez will be expected to deliver the title for the EG 0,0 Marc-VDS team. Inconsistency plagued the young Spaniard’s title ambitions in 2017, but the word from the team is that he has made a considerable effort this winter to curb his tendency to ride beyond the limit of the bike’s capabilities. There is no doubt he is extremely talented and is rightly considered a genuine front runner for this season. Despite a slow start to his Moto2 career, the 21 year-old has made significant improvements in his three years in the class. A strong winter has left both he and his team confident that the world championship could be theirs for the taking in 2018. Marquez is joined by rookie Joan Mir this season. The current Moto3 world champion signed a 4-year contract with the MarcVDS outfit late last season, leading many to speculate that he has his future sorted all the way into MotoGP. There is no denying he is an extremely talented rider, but will take time to adjust to the physical demands of the 600cc prototype, having moved up from the 250cc machines used in the junior class. Perhaps not a championship contender for this year, but definitely one to watch as the season progresses.

Sam Lowes returns to the intermediate category after a tough debut season in MotoGP with Aprilia. The British rider joins the Swiss Innovative Investors team for the 2018 season. Winning the championship with the team being the clear intention. The Lincolnshireman has looked strong throughout the winter testing, looking comfortable on the bike and setting headline lap times from the start. There is undeniable pressure on his shoulders. It is fair to say he did not get a fair opportunity last year in the premier class, and desperately wants to return. To do that, race wins and a strong challenge for the championship can be the only objectives he is striving towards this season.

Lowes is not the only British rider who faces pressure this season. Danny Kent (Beta Tools Speed-Up Racing) returns for a third stint in Moto2. For many reasons, Kent’s grand prix career has not managed to kick on properly, following winning the Moto3 crown in 2015. A third new team in as many seasons perhaps already puts the 24 year-old at a relative disadvantage to most of his competitors, as he has to adapt to a new machine. Kent still has the self belief that he can and will succeed. A good start this weekend in Qatar might provide the launch pad for his best season yet in the intermediate class.

Finally, it would be wrong to ignore Mattia Pasini (Italtrans Racing Team). The veteran Italian racer broke his duck last season with a breathtaking victory at his home grand prix in Mugello. A regular contender for podiums last season, and never outside of the top 5 in winter testing, makes it impossible to ignore that Pasini has as good a chance as the likes of Oliveria, Bagnaia and Marquez of becoming world champion in 2018. Especially impressive when one considers he is riding a customised Kalex machine with left-hand braking, to compensate for an old MX injury which has left the Italian unable to use a conventional right-hand braking system.