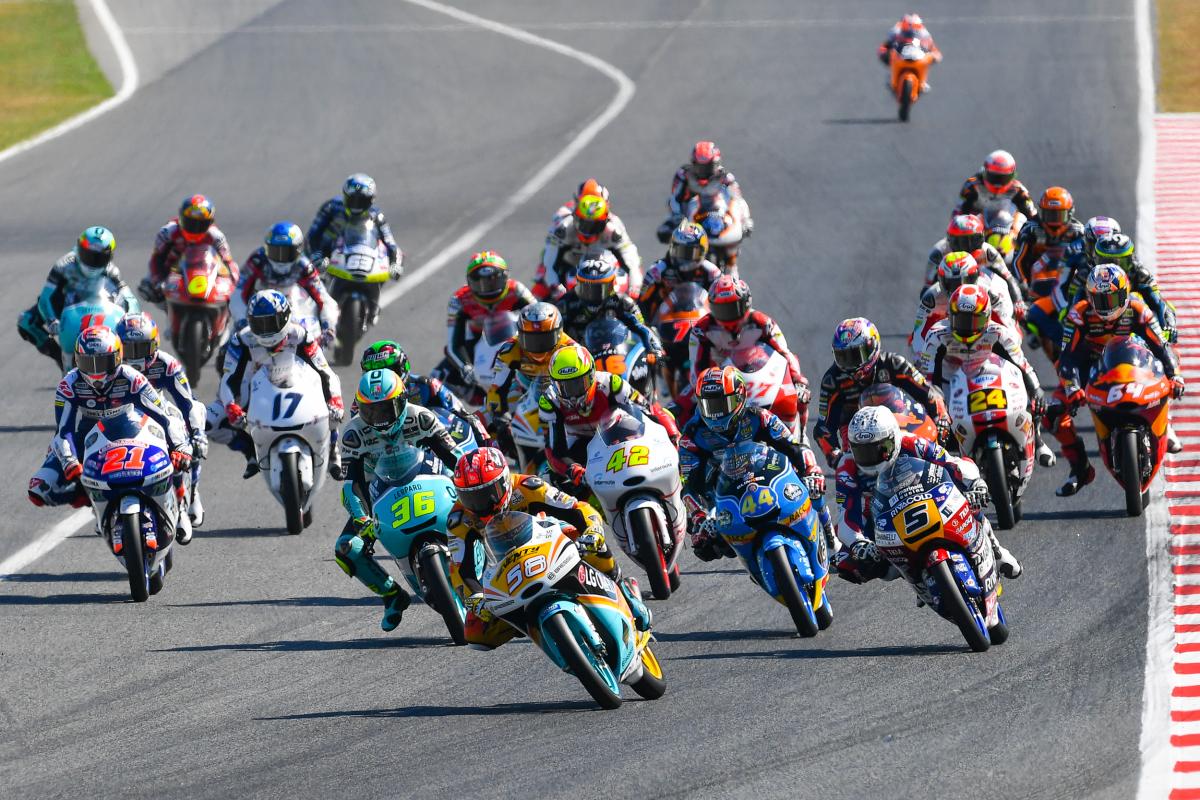 Moto3 explodes back into life this weekend at the season’s opening round at the Losail International Circuit in Qatar. For the first time since Moto3 was introduced, in 2012, Sunday’s race will be held in the mid-afternoon under the hot desert sun. The racing will remain unpredictable and extremely hard fought, as twenty eight very young, very talented riders desperately try to make a name for themselves on the grand prix stage.

One thing is guaranteed though in the junior class this season – we will have a brand new world champion come the season finale in Valencia. Last year’s runaway series winner, Joan Mir, has moved up to the Moto2 category for 2018 leaving the door wide open for a new superstar to take his place.

Enea Bastianini takes Mir’s seat at the Leopard Racing team, after a difficult season aboard the Estrella Galicia 0,0 machine. Despite being only 20 years old, the Italian is considered as a veteran of the Moto3 class having made his debut at this venue back in 2014. There is also the feeling in the paddock that Bastianini is under considerable pressure coming into this season, riding for a third team in as many years. He will be hoping that the move to the team which has claimed two world championships (2015 – Danny Kent, 2017 – Joan Mir) will be able to give him the tools to fight for a his maiden title. His times throughout preseason testing with his new team have been very promising indeed.

Following their impressive 2017 campaigns, Aron Canet (Estrella Galicia 0,0) and Jorge Martin (Del Conca Gresini) have perhaps rightly been declared the preseason favourites. The latter earned himself the reputation as being a ‘man of steel’ last year, having ridden through the pain barrier during the second half of the season after an horrific crash during Friday practice at the Sachsenring left him with a broken leg and a badly damaged shoulder. Despite this, the young rider from Madrid defied all physical expectations to finish the season with multiple podiums to his name, including his maiden victory at the season finale in Valencia.

Canet was the undisputed ‘best of the rest’ to Mir last year, with the 18-year old from Corbera taking 3 wins across the season, racking up a total of 199 points to finish third overall in the championship. Just like his compatriot, Martin, he remains with the same team for 2018. With a year of data and understanding his machine behind him, he will be very eager to cement his reputation as a world champion in waiting.

British hopes once again fall exclusively on the shoulders of John McPhee. The 23-year old has moved to the CIP-Green Power team for 2018, having been at the British Talent Team last season. The Scotsman will be looking to back up his performances from 2017, having secured a career best finish of seventh place in the overall standings. With his new team running KTM machinery, McPhee has the power to be able to fight towards the front of the field consistently. McPhee is joined at CIP by one of the rookies for this season. Kazakhstani rider, Makar Yuchenko. The 19-year old makes the move up from the Repsol CEV junior world championship following a run of impressive performances in the second half of last season.

Speaking of rookies, Yuchenko is joined by three other young prospects from the cadet categories organised by Dorna. Kazuki Masaki (RBA BOE Skull Rider) and Jaume Masia (Bester Capital Dubai) both make the transition this year from the Red Bull Rookies Cup series, the former arriving as reigning champion. All three will be measured directly against the fourth and final rookie in the series, CEV junior World Champion, Dennis Foggia (Sky VR|46). The young Italian already has some Moto3 world championship experience, having competed as a wildcard on three occasions in 2017.

Foggia’s arrival at the Sky VR|46 team puts immediate pressure on his experienced teammate, Nicolo Bulega. In 2015, Bulega arrived in the Moto3 class heralded as the next big thing from Italy. So much was the hype surrounding the young Italian that he very nearly ran the famous 46 plate. However for various reasons, a serious championship challenge from Bulega has not yet emerged. 2018 therefore could be titled the ‘make or break’ season for the 19-year old. Once again, he is on KTM powered machinery and with three seasons behind him, the time for Bulega to make his mark on the competition is now.

With so many riders having so much to prove already, before any of the bikes have been ridden with anger, 2018 promises to be truly spectacular and gripping viewing.