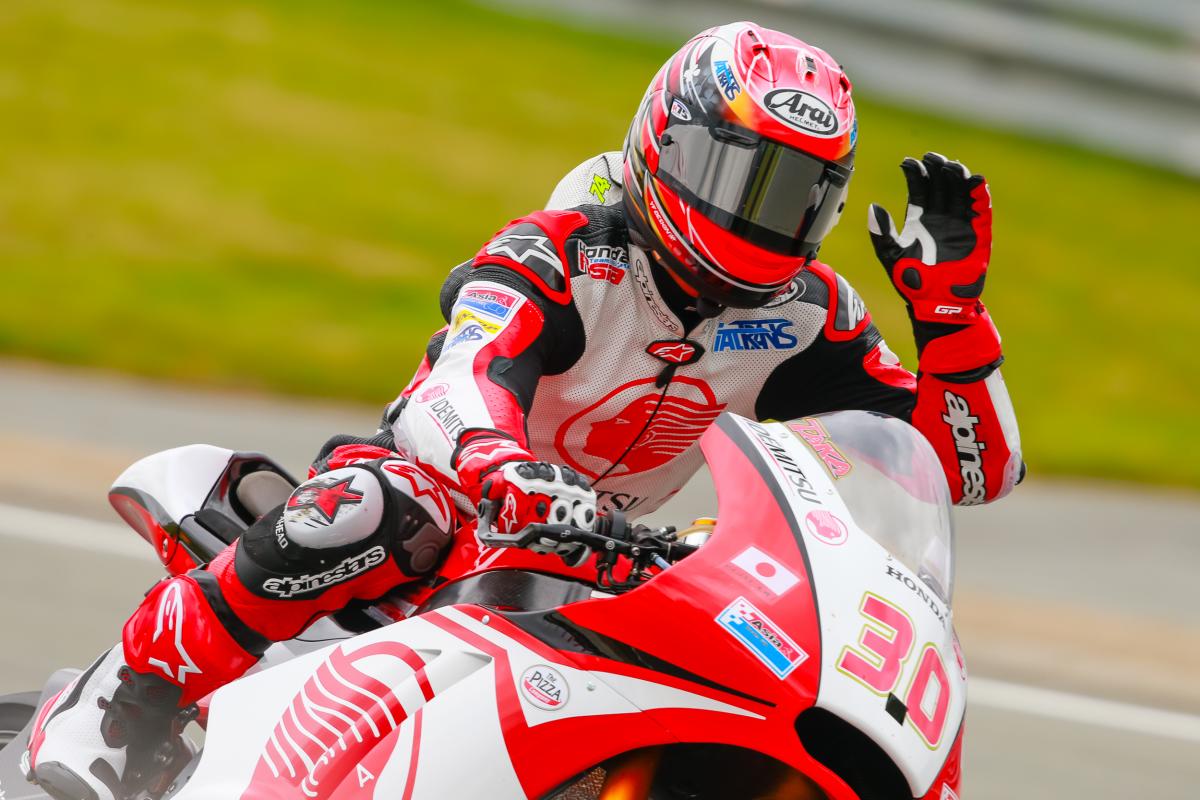 Japan had a Grand Prix winner once again as the intermediate class served up a thrilling race at Silverstone. With air and track temperatures considerably hotter than at any other point in the weekend, the riders had to balance racing on the limit and conserving enough precious life in their tyres.

It was a case of ‘what might have been’ for Alex Marquez. Having dominated the early stages of the weekend, the Spanish rider began the race from the middle of the front row and dictated much of the early laps in the lead. With teammate, Franco Morbidelli, in tow, the MarcVDS team once again found themselves with a sizeable lead to the rest of the field. However, as has been the case on more than one occasion this season, the pressure of leading got to him and unceremoniously dropped his machine on the entry to the Wellington loop. Morbidelli inherited the lead, but could not hold out for long as first Mattia Pasini (Italtrans Racing Team) then Takaaki Nakagami (Idemitsu Honda Team Asia) caught up and passed by, as his tyres slowly gave up the ghost. Third place was what the championship leader had to be content with this time.

That left the Italian and the Japanese rider to slog it out at the front for top honours, and what a show they put on for the fans. Despite initially building a healthy lead, Nakagami was slowly closed down by Pasini as tyre wear became critical. Once back together there would never be more than 1 second between the pair, the final seven laps consisted of some of the most thrilling racing as Pasini desperately tried to find a way past an inspired Nakagami. Having distanced the rest of the field, the gloves came off and neither gave any quarter as man and machine were tested to the limit. victory was not secured until the final lap when Pasini overcooked his braking down into Stowe corner, giving the Japanese rider a priceless half second lead, which was all he needed. Both looked shattered in parc ferme afterwards. Nakagami stated that “I had never pushed so hard”, whilst Pasini declared it “The hardest race of my life”.

There was action further down the field as Francesco Bagnaia (Sky VR|46) led home a ferocious battle over 5th to 9th places. The Italian has impressed in his debut season in the Moto2 category and this was a further achievement added to his CV, holding off the likes of Simone Corsi (Speed Up), VR|46 teammate Stefano Mazi, and the KTM duo of Miguel Oliveira and Brad Binder.

KTM had a mixed weekend. After a strong showing during Friday practice, the team found themselves going backwards through the field as the meeting progressed. Oliveira could only manage P8 in qualifying and had to ride out of his skin to finish in the same position. However, there was some cause for celebration as Brad Binder produced a very solid performance. The current Moto3 champion has endured a wretched season being plagued by injuries that simply refuse to heal up. Silverstone marked somewhat of a breakthrough for the South African who led his teammate for much of the race. A double points finish for KTM has been a rare occurrence this season, so this would have provided some consolation.

A final mention goes to the British riders. Jake Dixon road as a wildcard for the Dynavolt Intact team and finished in P25. The rising British Superbike star had never ridden a Moto2 machine prior to this weekend and met the team’s target of not finishing in the bottom three positions. Keifer Racing’s Tarran MacKenzie continued his baptism of fire in the class. Having lost the front end early in the race, all he could do was keep the engine running and complete his home round in 30th.

The race and the day belonged to Nakagami. He had faced much criticism in the build up to the British Grand Prix, following the announcement that he would be joining LCR Honda in MotoGP next year. This result was the perfect response.