“Showdown – NOUN. A final confrontation intended to settle a dispute.” Oxford Dictionary. The dispute?  Who will lift the 2022 Bennetts British Superbike Crown? 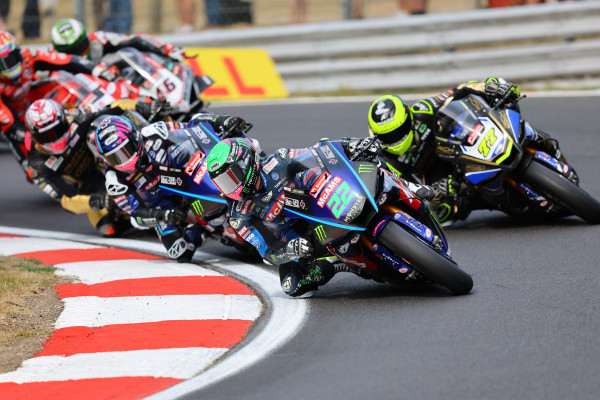 This weekend Oulton Park in Cheshire plays host to the travelling Circus that is the British Superbike paddock. Despite the tents and food vendors and merchandise stalls, it’s not Clowns we are here to see, it’s Gladiators!

A motor racing venue for 2 and 4 wheels since the 50’s, the former parkland/come formal gardens were converted to the racing circuit we know and love (although it has changed a little over the years) it has been the home of many adored racing series over the year such as BSB, British Touring Cars, Formula 3 and Porsche Carrera Cup etc. Oulton Park is also a favorite venue for track day enthusiasts of many different disciplines and track day experience providers.

This weekend is the first round where all eyes are now on the championship rather than qualifying for a position in the Showdown. The podium credits have been applied and the final game of musical chairs has finished. Everyone is now fully aware of their overall position within the points standings table. There are 9 races left in the 2022 season and the overall standings have the top 8 riders separated by just 53 points. With 3 races per weekend over the next 3 rounds, there are 225 points available between Race 1 at Oulton Park and the final race of the season at Brands Hatch on the 16th of October.  So as of this moment, it really is anyone’s guess who will lift the trophy at the end of the season and put their name on the plaque under the words ‘British Superbike Champion 2022’. A title held by racing greats such as Shane Byrne, Ryuichi Kiyonari, Neil Hodgson, Niall Mackenzie, John Reynolds and more. BSB is seen as the best domestic racing series in the world and winning the grand prize takes a tremendous feat of bravery and skill.

Coming into Oulton Park, the current series leader is Bradley Ray of Rich Energy OMG Racing Yamaha. Ray has had a stellar second half of the season and really piled the pressure on reigning champion, McAMS Yamaha’s Tarran Mackenzie. Team mate to Mackenzie is Jason O’Halloran who knows all too well the level of pressure any rider faces in the Showdown fight for the championship after slipping off his Yamaha in 2021 while occupying the top of the rider standings going into Oulton Park. Oulton Park in 2021 saw Jason O’Halloran’s title challenge take on water after 2 DNF’s which ultimately cost him the Championship.

It’s no secret that the three Yamaha riders are seen as the favorites to lift the trophy but as we have seen before, anything can happen in the Showdown. The first thing to consider is the great British weather. At the time of writing this it’s looking like the rain will hold off although it will be mild and overcast. As a keen motorcyclist myself, I can guarantee whatever the forecast says in late September, you can assume it’s wrong or just plain lying to you. You never know what the weather is going to do when moving into British Autumn.

The second thing to consider for the Showdown are the other riders on the grid. Although anyone from 9th onwards in the overall standings is not in contention for the championship, there are other things at stake for them. With the end of the season drawing close at an alarming rate, the rumors are starting to circulate. Silly season has started and there are already rumors flying around about who will be riding for who next year. There are riders looking to impress and therefore will not think twice about their position on track and how it would affect anyone else’s placement in the championship. It is a team sport, but it’s well known the only standings the race fans keep an eye on are the individual rider standings. All the riders are battling for a seat for the 2023 season, or to be seen as doing well from spectators in other paddocks around the world. Showdown rounds are usually where you end up with riders who are not racing for the championship taking wins, podiums and top 10 positions. These situations create an unknown for the riders in the Showdown… Imagine a tangle between a couple of riders and suddenly the gap in the standing shrink and we have a new championship leader? 5th place moves to 2nd etc. A situation we have literally just seen over in MotoGP where Pecco Bagnaia has battled to bring a 91-point deficit to Fabio Quartararo down to just 10 points, aided massively by the reigning MotoGP champions DNF at the recent Grand Prix of Aragon where Pecco finished 2nd and collected 20 points. 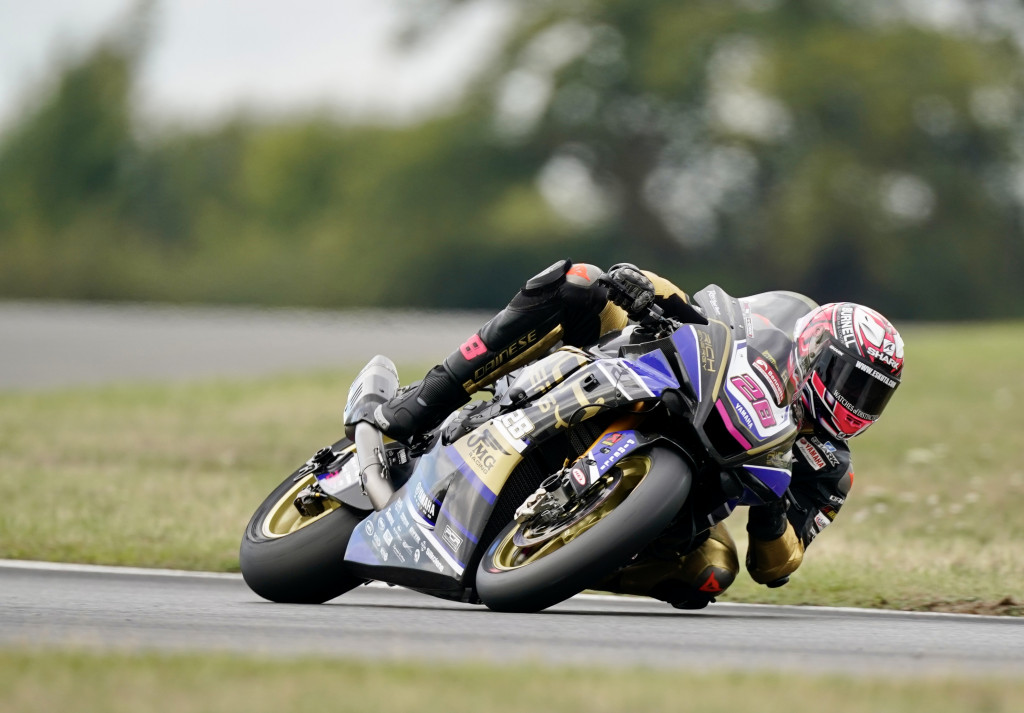 Bradley Ray – Rich Energy OMG Racing Yamaha. Brad’s plan is simply to go out and win. Hoping to keep his title rivals behind him, and on his recent run of form it’s not a bad plan whatsoever. Get your head down and win the championship by winning every race. It’s foolproof, providing he can pull it off. 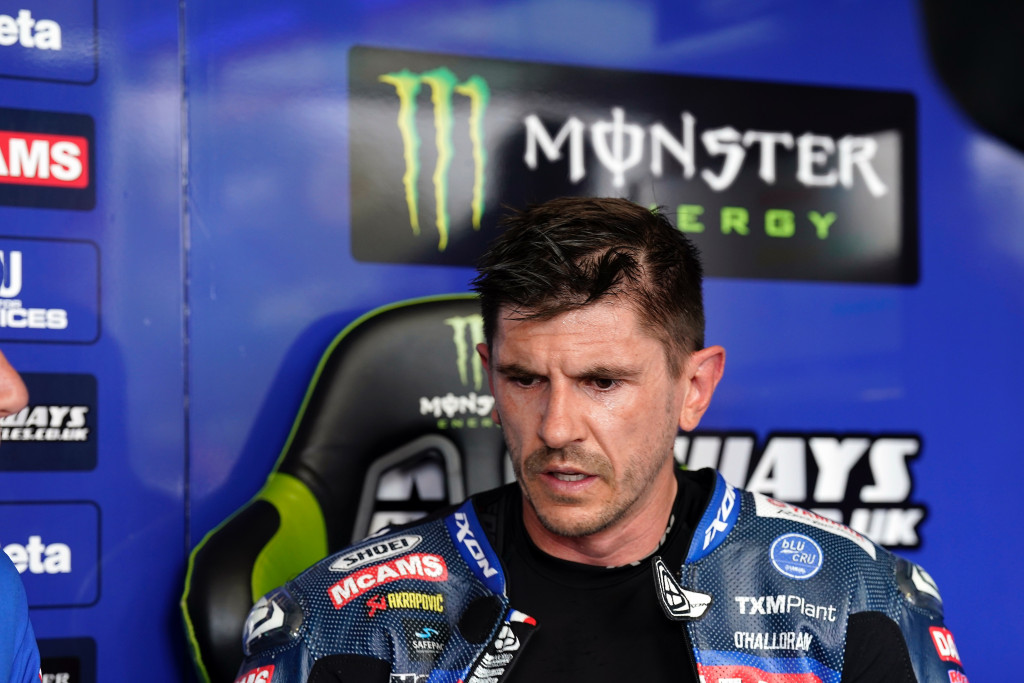 Jason O’Halloran – McAMS Yamaha. The ever-pragmatic Australian’s plan is to relax into the racing and see what the next few rounds bring. A strong season again for the McAMS rider has seen him once again in a very strong position to challenge for championship glory. Consistency needs to be the key to O’Halloran’s Showdown battle plan. Almost approach the Showdown in a race-by-race situation rather than worrying where his rivals are. O’Halloran has had a dip in form over the last few rounds which has given Brad Ray the overall lead, and I fear Jason has to hit the ground running or no matter what he does, it will all be a little too far to reach. 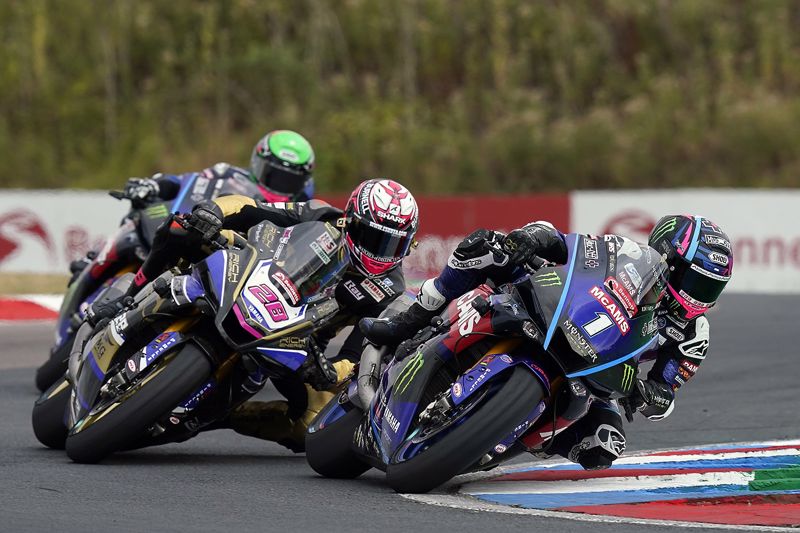 Tarran Mackenzie – McAMS Yamaha. Mackenzie has form at this point of the season after coming from behind in 2021 to dominate the Showdown and take his championship by the scruff of the neck. No doubt last year is something he aims to repeat after a dismal start to his 2022 season after suffering a broken ankle in a training crash. Tarran has great form at Oulton Park, Donington Park and Brands Hatch, although he was involved in a little skirmish with both Christian Iddon and Lee Jackson last year at Outlon, Tarran is still the man everyone is looking to now the Showdown has started. 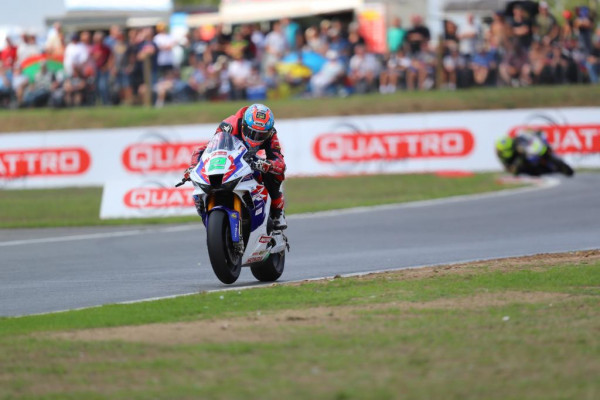 Glenn Irwin – Honda Racing UK. Glenn has an outside chance of the championship although he will need a little bit of bad luck for his rivals, or a poor showing in terms of finishing positions in their races. The Honda doesn’t generally enjoy the Oulton Park circuit so much and Glenn also wasn’t able to finish all the races held at Oulton in 2021, but recent improvements to the bike and a boost of confidence for Irwin after a strong round at Snetterton (despite podiumgate) should give the popular Northern Irishman a spring in his step for the weekend. I’m sure deep-down Honda think the Yamaha’s will be too strong for them but I for one hope to see the Fireblade and Glenn return to the top step before the end of the year. 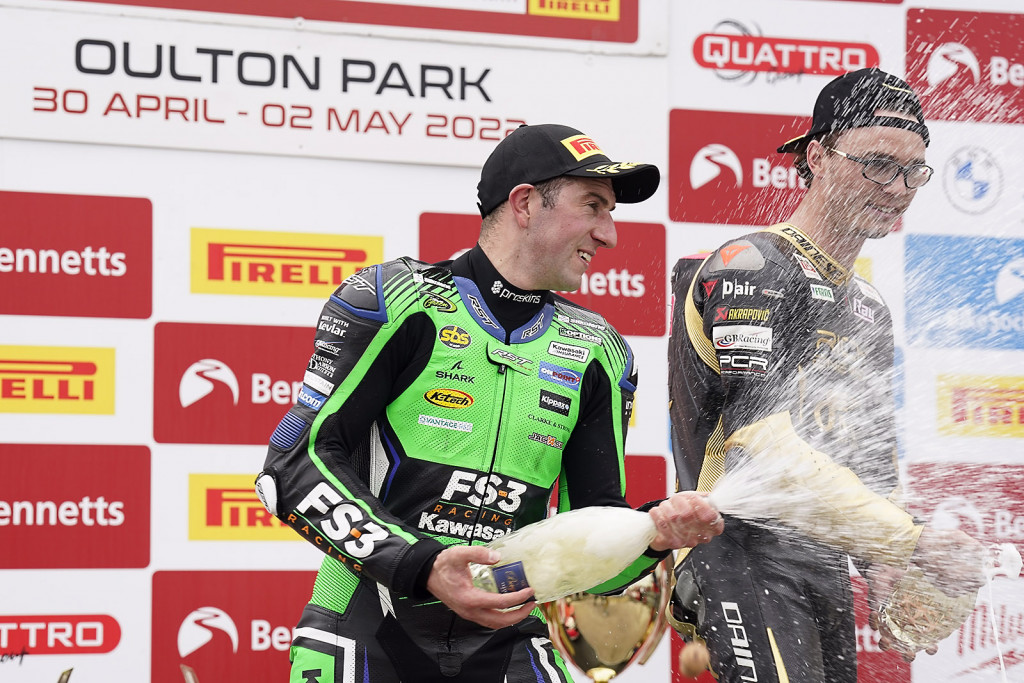 Lee Jackson – Cheshire Mouldings FS3 Kawasaki. Jackson needs a return of the form that saw him claim his maiden win at Oulton Park earlier in the season. With Jackson having re-signed with the FS3 Kawasaki team for 2023, the pressure of next year is off. With Jackson free of the silly season pressure, it will hopefully lift a weight from his shoulders and allow him to attack the weekend with nothing but podiums in every race to try and pull off the underdog story of the year. 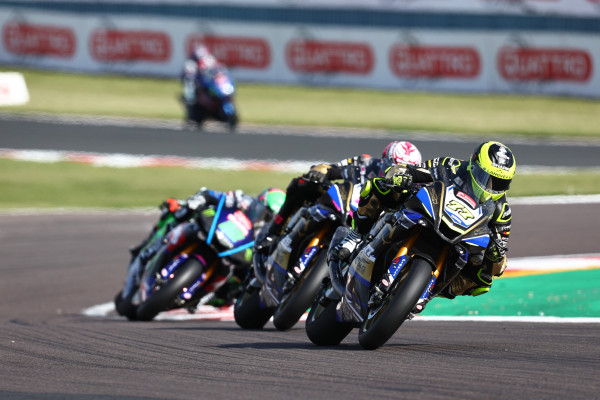 Kyle Ryde – Rich Energy OMG Racing Yamaha. Ryde is appearing in the Showdown this year for the first time. The popular Nottinghamshire rider will have no choice but to buckle in and see how it unfolds. If Ryde can return to the form from the start of 2022 which saw him take podium and race wins, there’s no reason he cannot promote himself into the top 3 positions in the standings overall. It’s fair to say Kyle has a big hill to climb to win the championship this year but nothing is impossible. Good luck to him I say and hopefully he can finish the season with a big smile on his face and plan for a new attack in 2023. 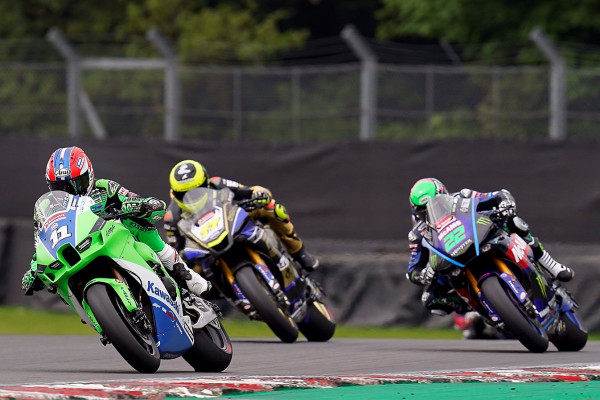 Rory Skinner – Cheshire Mouldings FS3 Kawasaki. Rory has had a standout season with multiple podium finishes and has done himself a grand service achieving a place inside the Showdown. Especially when you consider the grid he is racing against. He has well and truly put himself in the window for the rumoured move to Moto2 for 2023. A rumour which has gained traction since the announcement that Cameron Baubier will not ride for the American Racing Team in Moto2 for 2023 but return to home soil to race in Moto America. A move which would leave room in the team for Rory Skinner in his stead. Although nothing is yet announced, Skinner’s wild cards this year in the Moto2 paddock have come via the assistance of John Hopkins, former MotoGP and BSB rider, whom also has a lot of pull inside the American Racing team. Could Hopper be able to aid Rory’s step back up onto the world stage after falling through the crack in Red Bull Rookies? Skinner, like Ryde, will have to see how the next few races pan out and would be better concentrating on picking up a win, race by race rather than concerning himself with championship glory. A strong finish to the British Superbike season could well seal the deal / grease the wheels to his future. 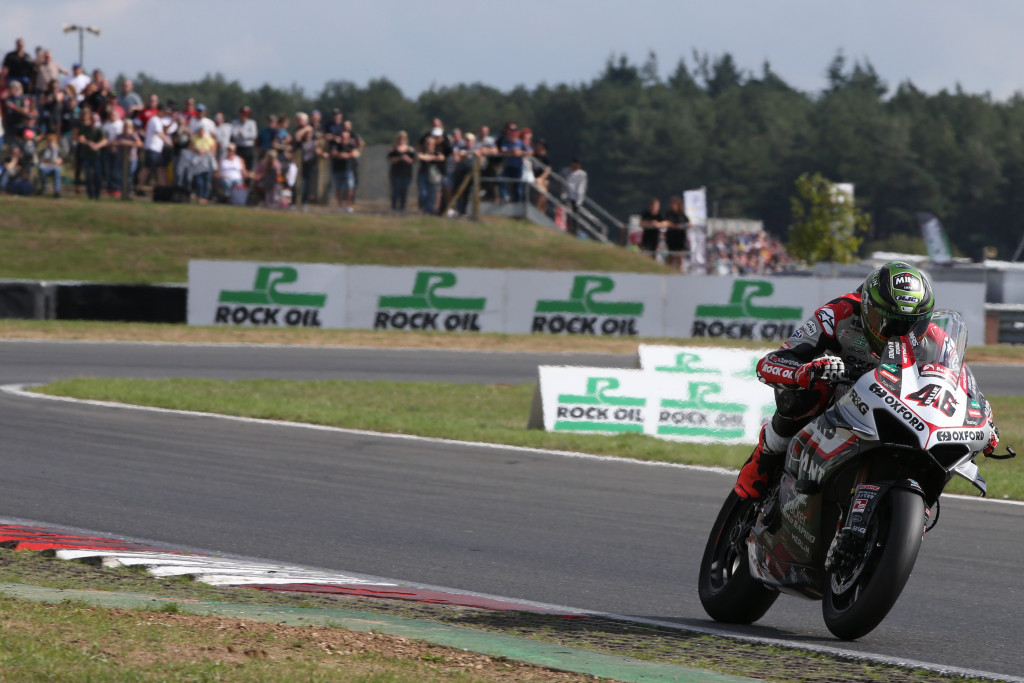 Tommy Bridewell – Oxford Products Ducati. Bridewell has had a somewhat up and down season with only 5 visits to the podium so far in 2022. Tommy seems to be in a similar (albeit more successful boat) as rival Ducati riders Josh Brookes and Tom Sykes. It seems the Panigale hasn’t been able to replicate its expected run of form this year and the package has spent most of this season in the mid-pack. Bridewell has a mega battle on his hands now to be in with a shout of championship glory but after a strong end to the Showdown in 2021 saw the Oxford Products Ducati rider pip Jason O’Halloran to 2nd in the championship overall, I for one have no doubts Tommy Bridewell will make waves over the next few weekends, especially at Oulton Park.

Good luck to all the riders this weekend in every category. We are truly in for a great show.