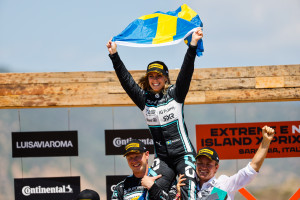 After being denied a perfect weekend in the last round by a post-race penalty, RXR took maximum points in Round 3 of Extreme E.

Competing for the first two spots in the final were top qualifiers RXR, Chip Ganassi, and Acciona Sainz.

Mikaela Ahlin-Kottulinsky for RXR got the best start with Laia Sanz in second place for Acciona Sainz. Sara Price was not far behind in the Chip Ganassi car.

It wasn’t long before Price was attempting an overtake on Sanz, but the two made contact and damage caused by the collision saw Price go off into the bushes. Chip Ganassi tried to continue but their rear right suspension was too damaged to finish.

The rest of the race was uneventful as the two teams remaining ensured they saw the chequered flag. RXR crossed the line first with Acciona Sainz joining them in the final.

Two more places in the final were up for grabs in Semi Final 2, which was contested between X44, McLaren, and ABT Cupra.

Last years championship challengers X44 got the best start and took the lead going into the first waypoint markers. ABT Cupra and McLaren were not far behind.

Emma Gilmour in the McLaren car harried ABT Cupra’s Jutta Kleinschmidt for the entirety of the opening lap, but ultimately she would not get through.

X44 entered the switch zone in the lead, swiftly followed by ABT Cupra and McLaren.

There would be no position changes on the final lap of the race, despite some Nasser Al-Attiyah in the ABT Cupra’s best efforts to close the gap on X44. X44 sealed the win and their spot in the final, alongside ABT Cupra.

Racing for the fifth and final place in the Final were Veloce, Andretti United, Xite Energy, and JBXE in the Crazy Race.

More contact between the two teams later in the lap, however, resulted in the Veloce car spinning and knocking down a waypoint flag. Despite the spin, Veloce remained in second place ahead of JBXE.

Andretti United would be uncontested for the remainder of the race, as they secured the last place in the Final. Further behind JBXE passed Veloce for second, with Xite Energy bringing up the rear.

The final race of the round was the five-car Final, fought between Acciona Sainz, RXR, X44, ABT Cupra, and Andretti United.

ABT Cupra got the best start as the lights went out, taking the lead. RXR were not far behind, with X44, Andretti United, and Acciona Sainz also close by.

An issue for the Acciona Sainz car saw them soon fall off the back of the pack, and eventually they parked-up, unable to finish the race.

The teams came in to the switch zone line astern, with very little to separate them. But disaster struck ABT Cupra when Jutta Kleinschmidt failed to do up all of her safety belts correctly.

ABT Cupra continued on in first position but with a penalty looming large, their chances of winning seemed to dwindle.

RXR soon took advantage of ABT Cupra’s misfortune, with Mikaela Ahlin-Kottulinsky overtaking Kleinschmidt on the inside. From there RXR would not relinquish the lead as they sealed maximum points for the weekend. They also picked up the extra five points for the fastest Continental Traction Challenge time.

ABT Cupra were later disqualified, promoting X44 into second place and Andretti United into third.

With their final win, RXR took the maximum 30 points for the weekend. X44 finished second overall, with Andretti United finishing in third. Xite Energy propped up the standings.

RXR extended their lead at the top of the championship to 37 points over Chip Ganassi. X44 jumped into third position, just 2 points behind Chip Ganassi. Veloce continue their poor run at the bottom of the standings.