I met Michael at this year’s Bike Show @ the Excel and he very kindly answered some questions for me.

Michael is known as “The Blade” and currently races in the National Superstock 1000 Championship aboard a BMW S1000RR. He has a reputation for being at his best in wet conditions and his favourite circuit is Oulton Park. Michael has won 29 British Superbike Championship races with the most recent being at Silverstone in 2010, and finished as series runner-up twice. He has also contested MotoGP and World Superbike Championship.

1. What is the best feeling about being on a motorbike?
The freedom and the speed.

2. What is the one thing people would never know about you just by looking at you?
Oh blimey, I don’t know!

3. What was your most embarrassing moment on a motorbike?
When I was going to take some newcomers out on the Classic TT and I forgot my gloves.

5. Do you have a lucky thing/ritual before the start of a race?
No, not really although if it was a number I didn’t like, I wouldn’t have it.

6. What was the first motorbike you owned?
A TS50X Suzuki.

7. What is your favourite stretch of road to ride on (not including a race track)?
The road from Bridgnorth to Stour Bridge, I run all my bikes in on that road.

8. If you hadn’t been a racer, what would you have been?
A mechanic.

10. If you got arrested, what would your friends and family assume you had done?
Definitely for speeding! 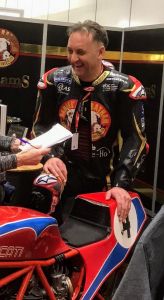