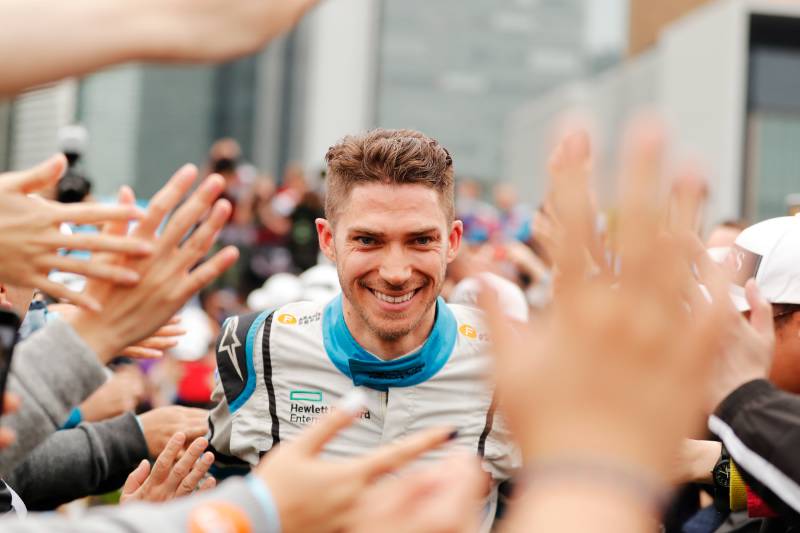 Edoardo Mortara scooped Venturi’s first ever win in the team’s history at the Hong Kong ePrix this weekend. The Swiss driver benefited from a late post-race penalty imposed on Envision Racing’s Sam Bird who won the race, but was given a five second time penalty after contact with Andre Lotterer which forced the Techeetah driver out of the race.

Qualifying was blighted by the everchanging conditions of the Hong Kong climate, with Mahindra miscalculating the correct window in which to set a lap which left both Jerome D’Ambrosio and Pascal languishing at the bottom of the timing screens. Audi’s Lucas di Grassi was the first driver to make an impact, snatching P1 from under Sam Bird and Antonio Felix da Costa’s noses in the worsening weather.

Mortara showcased his experience on street circuits by claiming P1, followed closely by Lotterer who made a mistake in his final sector. Jean Eric Vergne’s misery continued as he repeated history by sliding over the final line backwards, but could only manage P6 and suffered cosmetic damage to his Techeetah. His lap was later cancelled due to the incident.

Times soon began to tumble as the session approached the halfway stage with Oliver Rowland and Felipe Massa slotting themselves into the top six. However, it was HWA that impressed in the storm with Stoffel Vandoorne taking provisional pole by over half a second from teammate Gary Paffett who managed to snatch his debut in superpole. They were joined in superpole by Rowland, Mortara, Lotterer and di Grassi.

The weather continued to wreck havoc on superpole as di Grassi set a time of 1.14.177, only to be displaced by Lotterer a few moments later by a difference of 1.3 seconds. Mortara thrived in the difficult conditions, claiming P1 with a time of 1.12.310, half a second up on Lotterer. However, after the session ended, he was hit with a three place grid penalty for ignoring red flag conditions and dropped out of contention. Times continued to tumble as the track conditions became more favourable with Rowland disposing of Mortara by two tenths of a second. The two HWAs remained and Paffett locked up into turn one, forcing him into P4 behind Lotterer, but Vandoorne impressed once again, claiming his first ever pole position for HWA with a 1.11.580.

Rowland wasted no time at the start of the race, snatching P1 away from Vandoorne in the opening lap who was then passed by Bird, dropping the HWA rookie down to P3. Mahindra’s terrible luck continued as Felipe Nasr tagged the wall into turn two, collecting both Wehrlein and D’Ambrosio along the way, sending both cars out of the race with suspension damage. The race was red flagged in order to collect all three cars stranded in a precarious position with Rowland still leading the race.

As the race got underway once more, most of the drivers armed themselves with their first attack mode as Lotterer pounced on Vandoorne immediately for P3. Out of turn one, Rowland slowed and dropped down the order, losing the lead at the expense of Bird. Lotterer began to press Bird for the top spot, finally forcing the Brit into a mistake to snatch the race lead away. However, Bird continued to fight back and kept the pressure on the German who began to struggle with energy consumption in the latter stages trying to keep Bird behind. Whilst one Techeetah dominated, reigning champion Vergne’s bad luck continued as he cut the chicane at turn one, earning a penalty.

Rowland continued to carve his way back through the field muscling his way past Daniel Abt for P9, whilst Alex Sims tagged the wall, forcing him out of the race. Bird continued to press Lotterer, and attempted a move into turn two, passing the German for a moment, before Lotterer reclaimed the lead. The battle at the front as Vandoorne’s car stopped on track, whilst Buemi was forced out of the race with damage.

As the race restarted with over ten minutes left on the clock, Bird continued to pile the pressure on Lotterer for the lead with Mortara holding di Grassi for P3 as Rowland’s hard work on climbing up the order was undone when he made contact with the wall, and stopped on track, bringing out a third safety car. With two minutes remaining, the race was restarted and the battle at the front came to a head as Bird made contact with the back of Lotterer’s car, causing a puncture which subsequently ended the German’s race. A subdued Bird claimed P1 but celebrations were muted after the announcement that there was an investigation of the incident between himself and Lotterer. After the race, Bird was handed a five second time penalty which dropped the Brit down to P6 and Mortara inherited the win, his and Venturi’s first win in the series. Di Grassi moved up to P2 and Envision Racing’s Robin Frijns inherited third.

Formula E will continue in Sanya on March 23rd.