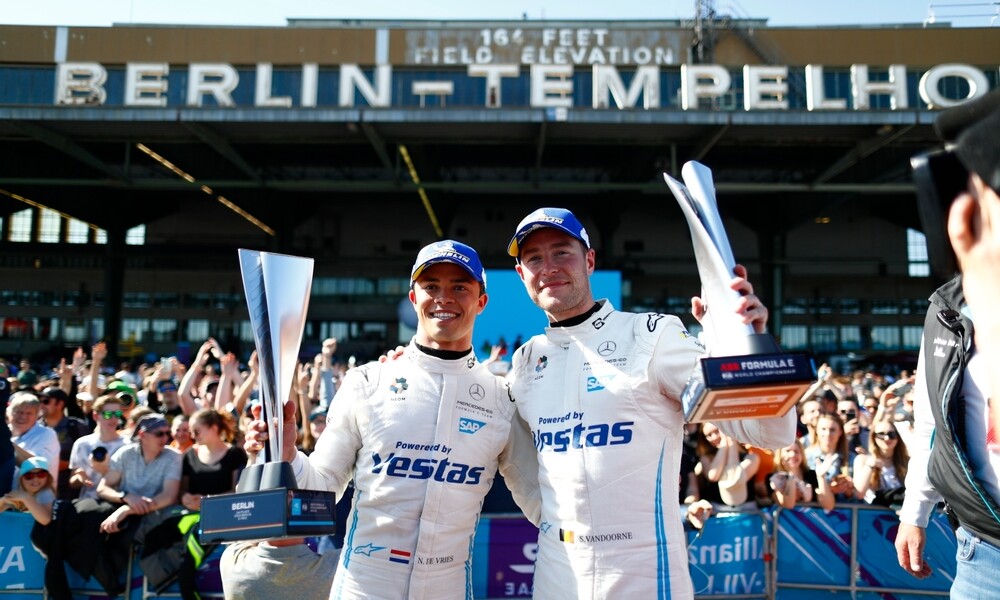 It was another exceptional day for Mercedes power with current world champion Nyck de Vries taking his first win since the opening round in Diriyah in the second race in Berlin. The Mercedes man made a lightning start from the second row of the grid and never looked back – he claimed a dominant and assured victory, finishing two seconds ahead of his competitors. The second race ran in the opposite direction, which coupled with the warmer conditions, threw up many challenges for the drivers with many struggling. However, for Mercedes, Berlin suited their package perfectly.

The Mercedes dominance began in qualifying as Edo Mortara claimed another pole position with an incredible display. The Venturi man claimed victory in the duels with blistering pace, beating out Envision’s Robin Frijns by four-tenths of a second. Nyck de Vries just missed out on the front row, the Dutchman had to settle for P3 ahead of Andre Lotterer who had another strong outing in the qualifying duels. Antonio Felix da Costa started from P5, alongside Lucas Di Grassi who rounded out the top six. Nick Cassidy was due to start in the top six, but a change of inverter in the Kiwi’s car forced him to drop down the order to start last after being hit with an eighty-place grid penalty.

Mortara’s hopes of a double race victory were shattered within the first lap, as de Vries took the lead sneaking up the inside of himself and Frijns. The grid order barely wavered in the opening stages until the drivers armed themselves with attack mode. On this occasion, they were permitted one usage for eight minutes which forced the drivers into different strategies. Da Costa was one of the drivers who benefited in attack mode, climbing the order into the podium positions as Frijns, who missed attack mode on his first attempt, and Lotterer both struggled to keep up with the pace at the front. Mortara wrestled P2 back from Da Costa as Di Grassi and Frijns teamed up to usurp Vandoorne. However, as the race entered the latter stages and attack mode spent, the frontrunners became clear. De Vries began to pull a gap at the front of the race as the battles continued behind him.

Vandoorne made another incredible late charge with the Mercedes clearly favouring the hotter conditions, squeezing Lucas Di Grassi out of the podium positions. However, it was his teammate that claimed victory, ahead of Mortara, a solid result for the Swiss-Italian driver with Vandoorne claiming P3. Di Grassi recovered well to take P4 ahead of Frijns and Da Costa, who were involved in a last lap battle for P5. Frijns was victorious – an excellent recovery drive given his error at the start of the race. Oliver Rowland had a stunning drive – the Mahindra man started in P10 but soon made his way through the field, finishing in an impressive P6. After struggling with temperature early in the race, Lotterer claimed P8, ahead of Jean-Eric Vergne in P9 who used his fanboost in the dying stages. Mitch Evans claimed the final point on a circuit that doesn’t really favour Jaguar’s race package.