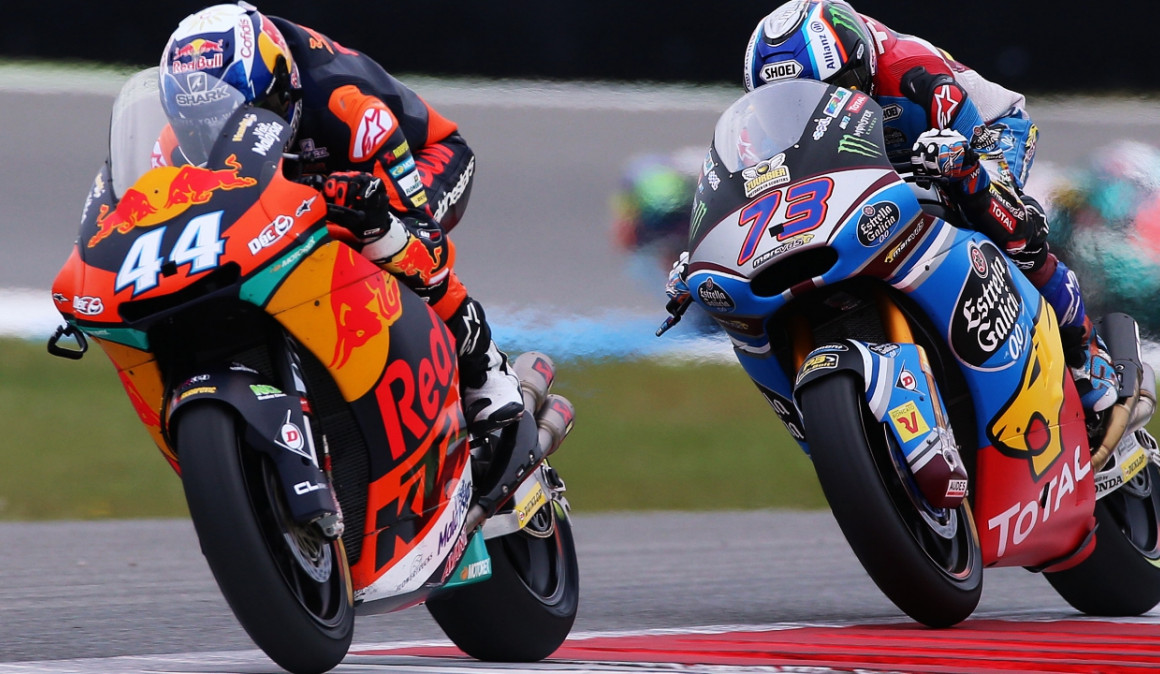 The 2018 Moto2 World Championship heads to Valencia this weekend, for the nineteenth and final round of the season, two weeks on from Sky Racing Team VR46’s Francesco Bagnaia wrapping up the title in Sepang.

With the championship decided, the chains are well and truly off for the riders this weekend for the final race, and all of them will be eager to go into the winter with a win.

No one more so than newly-crowned champion Bagnaia who, after seeing teammate Luca Marini claim his first career GP win last time out, will be keen to return to the top step himself having not seen the chequered flag first since Thailand. On top of that, Bagnaia will want to enter his first MotoGP preseason with as much confidence as possible, and a win in his final Moto2 race will assist in that. On the contrary, he will also presumably have one eye on next week’s first 2019 preseason test for the premier class riders, and his first opportunity to get a taste of the Ducati GP18 he will race next year.

Joan Mir (EG 0,0 MarcVDS) is the only one of the four riders moving up to MotoGP to have not won a race this season. As a rider who is going straight into a factory team (Ecstar Suzuki), so his motivation will be high for the final race of the season, especially as he missed out on the 2017 Moto3 win in Valencia to Jorge Martin. Mir came closest to winning this season back in Australia, where he missed out on the win by just a few milliseconds to Brad Binder (Red Bull KTM Ajo). He will hope to reverse that deficit this weekend, and having gone well on the anti-clockwise Sachsenring before the summer break (his final podium before Australia, also anti-clockwise), there is a good chance that Mir could be right in the mix this weekend at the (left-handed) Circuit Ricardo Tormo. Furthermore, Mir is currently third in a mathematical four-way scrap for fourth place in the championship with Lorenzo Baldassarri (Pons HP40) leading the way in that fight from Alex Marquez (EG 0,0 Marc VDS), Mir and Luca Marini.

There could also be a good opportunity for Fabio Quartararo this weekend, as he has excelled so far this season with the Speed Up frame in low-grip conditions. He tends to have strong drive grip, and that could be crucial this weekend on a circuit which is not famed for its stunning grip.

As for Miguel Oliveira, it is difficult to say what he can achieve this weekend. By no means have we seen the maximum from the Portuguese rider over the past few races, perhaps since as far back as Aragon, but now with the pressure of the championship lifted from his shoulders, he should be able to ride more freely, and he will certainly be aiming to end his time in Moto2 with a win before he jumps on the Tech 3 KTM next week.

Almost on the opposite end of the scale is Mattia Pasini (Italtrans Racing Team). He is without a ride so far for 2019, and despite a morning of strong rumours mid-week in the build up to Valencia which suggested he could be replacing Nicolo Bulega in the Sky VR46 team for next season, those supicions were quashed by Sky Racing Team VR46 team manager, Pablo Nieto, who confirmed that Bulega will be with the Italian outfit next season alongside Marini. Valencia could prove to be Pasini’s final Grand Prix, and should that be the case he will want to go out in style.

All predictions, however, could be thrown out the window should the weather forecast be accurate. It is expected that there will be a lot of rain this weekend, and that could open an opportunity for a rider with little to lose, and a lot to gain, to put in a surprise performance.