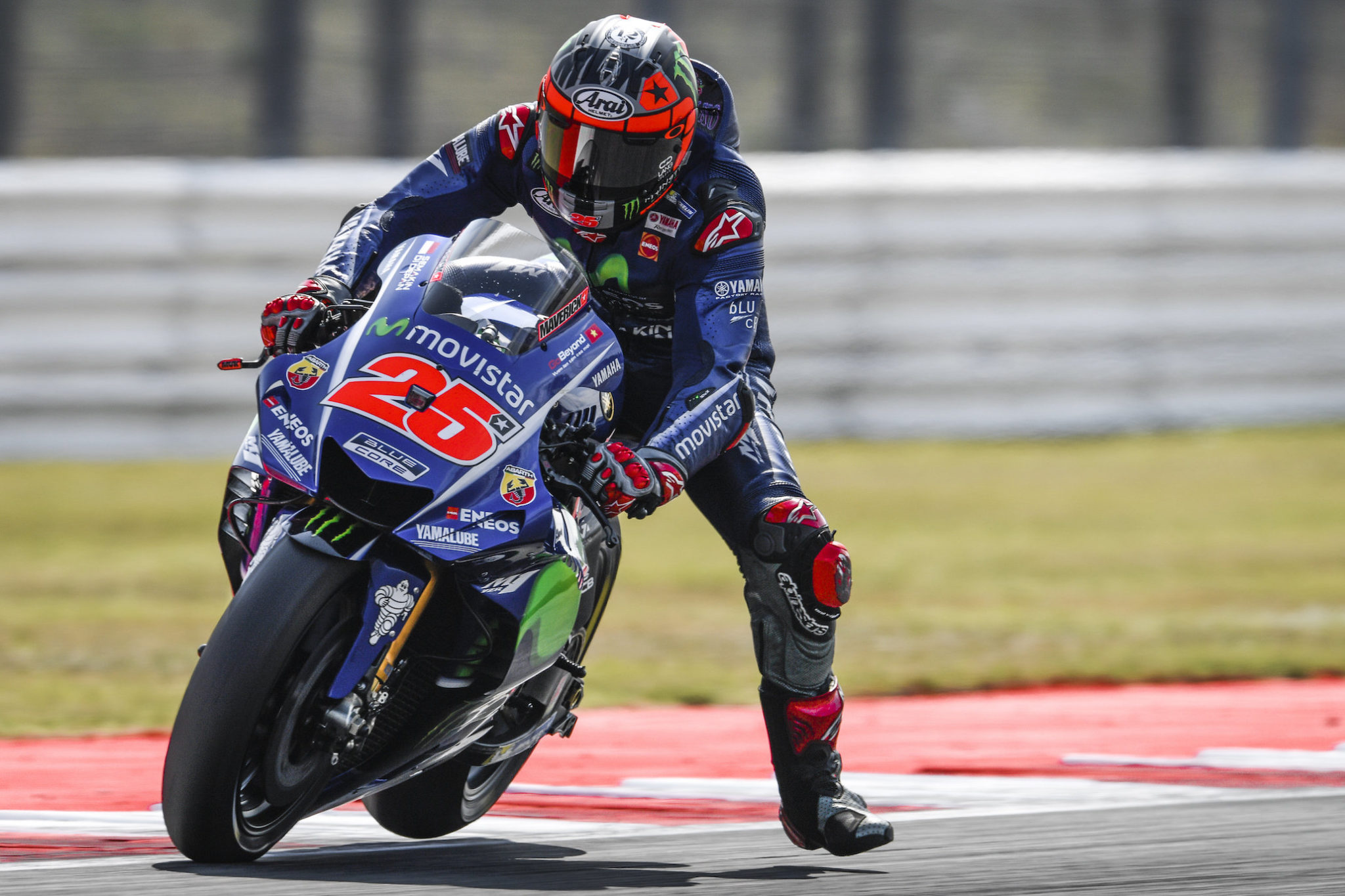 The rain, which had turned the three main practice sessions into more of a jet ski contest, had finally relented. With the track rapidly drying, slick tyres were finally shod for the first time this weekend as qualifying began.

It was not a straightforward hour for Vinales (Movistar Yamaha). The 23-year old, as he had to go through the first qualifying session, having not made to top 10 after the first three practice sessions. With the track drying with every lap, Vinales timed his Q1 effort to near perfection, being the last rider over the timing line, benefiting from the best possible conditions. With Q1 a rehearsal, the Spaniard nailed his final effort in Q2. Threading the eye of the needle with sheer confidence and precision (one glance of the painted kerbs would’ve ended in disaster), Vinales’ time – 1’31.312 – was good enough for pole position by 0.068s. The beaming eyes from inside the helmet, as he rode into parc ferme, said it all.

Alex Rins (Team Suzuki Ecstar) and Andrea Dovizioso (Ducati) secured the remaining places on the front row of the grid. Despite piloting bikes with polar opposite characteristics, both riders looked in complete control as the track constantly evolved throughout the session proving that in tricky conditions the riding style has more of an impact on lap time. Both will be expecting to deliver again tomorrow.

Danilo Petrucci (Alma Pramac Ducati) backed up his form from practice with securing P4. The Italian has been ever present in the top 5 throughout the weekend, and with the promise of more rain tomorrow it would be a brave punter to bet against him securing at least a podium finish.

Marc Marquez (Repsol Honda) crashed at turn 4 on his opening flying lap, dislocating his shoulder as the bike slammed itself and rider into the deck. Remarkably, the reigning world champion returned to the track with 6 minutes of qualifying remaining setting a lap time good enough for P5, and a slot in the middle of second row.

Rounding out the second row is Marquez’ compatriot Pol Espargaro (Red Bull KTM) – his best qualifying result since Australia 2017. He and the team will be hoping history can at least repeat itself tomorrow with a top 10 race result.

Andrea Iannone (Team Suzuki Ecstar) hooked it together in a frantic first qualifying session. The Italian mastered the drying conditions, setting the best lap time almost half a second clear of fellow qualifier Vinales. He heads up the third row of the grid tomorrow, in P7, and will be desperate to secure what is likely to be his last competitive result for some time.

It was, however, as disastrous qualifying for Valentino Rossi (Movistar Yamaha) who failed to make the cut into the pole position shoot out. The 39-year old will have to fight his way through the field tomorrow, from a lowly P16 on the grid.

Jorge Lorenzo (Ducati) just missed out on a place in Q2, the wrist injury was ultimately still causing him just too much trouble. Nobody can fault the Spaniard’s commitment to racing this weekend. Having steadily improved session-by-session this weekend, there will be a quiet confidence in his camp tonight that he can produce one final good result tomorrow for the team, before moving to Repsol Honda in 2019.