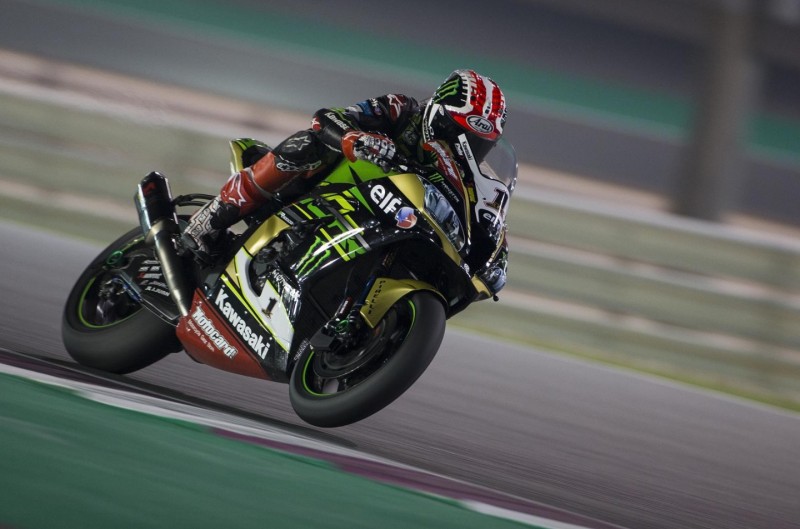 Kawasaki Racing Team secured their fourth 1-2 finish of the season, as Jonathan Rea led home Tom Sykes under the floodlights of Losail.

Rea made the holeshot from the grid to take the lead at turn 1 and, as so often is the case, began pulling clear from the field almost immediately. Once with a manageable gap, the newly-crowned 4x world champion was able to dictate terms with his familiar metronomic rhythm. Today’s victory makes it 17 for the Northern Irishman this season – equalling the record set by Doug Polen, way back in 1991.

Tom Sykes, in his final weekend for the Kawasaki Racing Team has not been prepared to go out on a whimper. The Yorkshireman secured pole position in qualifying earlier this afternoon, and also had his sights set on victory. Whilst his teammate ensured that this was impossible, Sykes secured second place – his first podium finish in five races (and his eighth of the season).

Such is the vast length of the Losail International Circuit (5.38km) and the technical nature of the corners, within a couple of laps there were considerable time gaps already opening up between the various groups of riders. Nevertheless, there was action aplenty as riders diced and duelled with each other.

Xavi Fores (Barni Racing Ducati) and Marco Melandri (Aruba.it Ducati) thrilling fight over fourth and fifth places. Lacking the cornering stability of the factory counterparts, Fores produced a strong defensive ride on his independent Ducati, utilising the raw horsepower to pull as much of an advantage down the 1km long main straight, and holding a defensive line through the sweeping corners. However disaster stuck for the Spaniard as technical issues forced him to drop back through the pack – eventually crawling home in P13.

His loss was very much Melandri’s gain, as well as more than a fair amount of relief. Despite throwing everything at him, the factory Ducati man could not find a way past the independent Ducati rider. The Italian, who is seeking a new ride for next season, finished in P5 – collecting a very respectable 11 points for the factory backed outfit.

Chaz Davies (Aruba.it Ducati) started P11 on the grid and immediately set about trying to carve his way up the order. Doubtless he was motivated on by the ongoing battle for second place in the championship with Dutch rider Michael Van der Mark (Pata Yamaha). Van der Mark eventually finished in P7, taking the bragging rights today and ensuring that this personal battle for honours goes down to the final race tomorrow. Both riders however were royally mugged in the closing stages by Loris Baz (Gulf Althea BMW). The Frenchman had done a remarkable job of preserving his tyres, and blasted past the duo who could offer no reply.

Eugene Laverty (Milwaukee Aprilia) and Alex Lowes (Pata Yamaha) were locked in a thrilling battle for the final place on the podium. Both riders have looked strong throughout the weekend so far, with Laverty firmly putting himself in the proverbial shop window for a potential ride with Red Bull Honda next season. However it was Lowes who emerged the triumphant, forcing his R1 machine past the Aprilia on the final lap, holding on to third place through the final corners. Laverty will at least have the consolation of starting from pole position on tomorrow’s partially reversed grid.

Jake Gagne (Red Bull Honda) secured his best finish of the season so far, with a hard fought ninth place. It has been a tough debut season for the young American, with his place under much scrutiny in recent weeks. A solid return of points today might go some way to securing his future in the class for 2019. Additionally, the result makes up for his teammate Leon Camier who crashed out with 10 laps of the race remaining.

Rounding out the top ten, and being the first independent rider home, was Toprak Razgatlioglu (Puccetti Kawasaki). The Turkish star once again managed to extract the most amount of performance from his ZX-10R machine, fighting with the Hondas and Lorenzo Savadori (Milwaukee Aprilia) for much of the race.