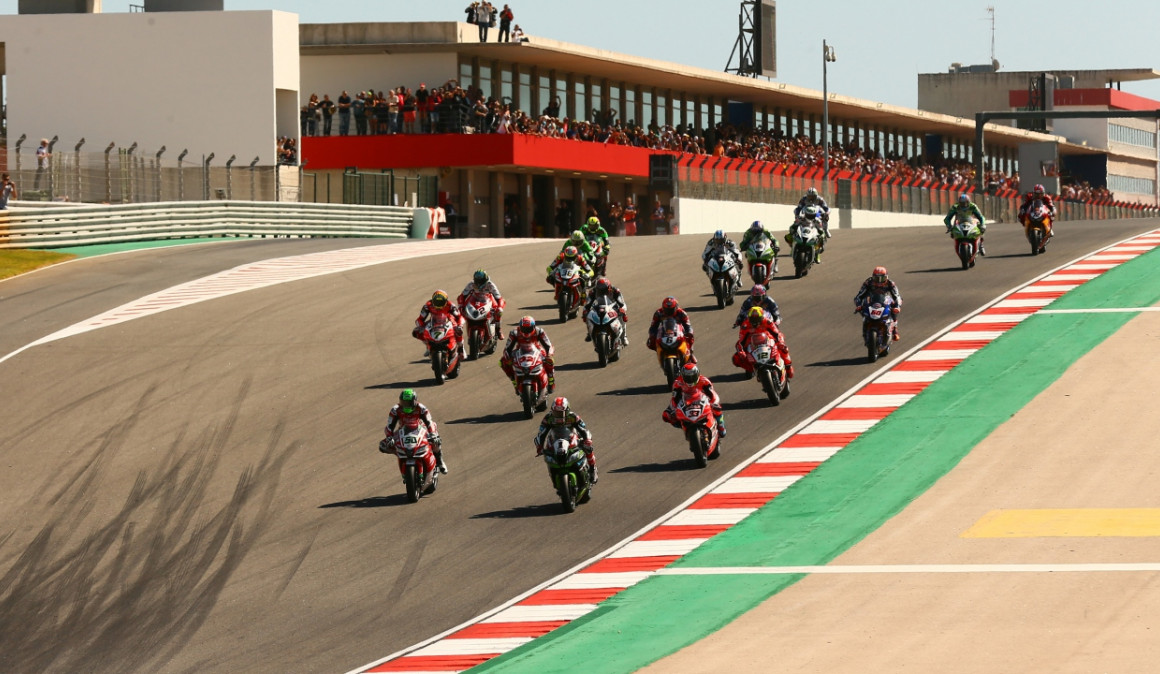 World Superbikes roared back into life over the weekend with Round 10 taking place in Portugal. Another brace of victories for Jonathan Rea (Kawasaki Racing Team) means he just needs to score 9 points at Magny-Cours to secure his fourth consecutive world title.

However, there were other stories to emerge this weekend other than Rea’s dominance.

Before the weekend had started, it was announced that WorldSBK would be trialing a new ‘race day’ schedule for the remaining rounds of the season. The objective of which was to boost attendances on the Sunday, which have been alarmingly sparse for the last few seasons.

The general consensus behind this was that spectators are ‘put off’ by the feature race opening proceedings, with the support classes following. In short, the day is effectively over by 1pm with most paying punters tending not to stay for the ‘junior’ categories.

By reversing the schedule, Sunday felt more like a traditional race day, with the Superbike race being the grand finale to the weekend. The success of this change was in clear evidence at Portimao as the attendance was visibly higher than last year.  Certainly a step in the right direction to bringing back the crowds.

Word in the paddock is that – following a ‘fan survey’ conducted in partnership with the Motorsport Leadership Group – Dorna will be implementing further changes to the race weekend schedule next season. Details of which will be announced during the winter.

The phrase “History waits for no man” may well be true – however, it is certainly having to wait for Ana Carrasco. The young Spanish rider is on the verge of becoming the first woman to win a solo motorcycle world championship series.

Carrasco (DS Kawasaki Junior Team) has had a tremendous year in the World Supersport 300 class, featuring two devastating race wins at Imola and Donington Park earlier in the season. The former was secured by a colossal margin of 13 seconds. To put that into perspective for an ‘average’ winning time gap, it is normally around 0.5 seconds as competitors slip-stream each other from lights to flag on their small 40bhp machines.

Although she was unable to secure the championship in Portimao, she heads into the French round (the final round for the ‘300 class) with a ten-point lead at the top of the standings. Provided she can finish on the podium, Carrasco will become the world champion – regardless of where her rivals finish.

Tom Sykes – Where To Next?

Whilst Rea was busy taking the 65th and 66th victories of his superbike career, it was another difficult weekend for his teammate Tom Sykes. The 2013 world champion secured a brace of 5th place finishes. Were it in any other team, this would go down as a very solid weekend. The Yorkshireman cut a gloomy figure this weekend. Despite best pretenses from rider and team, all is not well at his side of the garage.

If ‘silly season’ rumours have any substance to them then it appears likely that Red Bull Honda are making advances for him in 2019. He would almost certainly be partnered alongside Leon Camier, and would no doubt increase Honda’s chances of returning to winning ways next season.

Alternatively, speaking in an interview to Eurosport UK prior to Sunday’s race, Milwaukee Aprilia team principal Shaun Muir openly admitted to be interested in signing Sykes for next year.

Two things are certain: Sykes is still a quality rider, and does have options to remain in WorldSBK for 2019. A change of team could be just what he needs to bring the best out of him again.

All Change For Milwaukee

Finally, as alluded to above, Shaun Muir is openly looking at bringing at least one new rider into his team for next season. However, being the shrewd competitor and businessman that he is, the Milwaukee outfit seem set to change manufacturers for 2019.

Currently running factory supported Aprilia machinery, it the team are discussing options with them, BMW and Suzuki.

From a British fan’s perspective, a potential deal with Suzuki could open the door for Bradley Ray to make his move into world level racing. The 21-year old (currently wowing spectators and TV viewers in British Superbikes) has made no secret of his desire to move up and compete in world championships. With all his BSB experience on Suzuki machinery, it would be a straight forward move for both Mailwaukee and Ray to make.

However, it seems that BMW are in fact the most likely option which Muir will take up. With the S1000RR model being significantly upgraded by the German manufacturer for 2019, the promise of being the most competitive machinery  of the three is likely to be the deal maker.