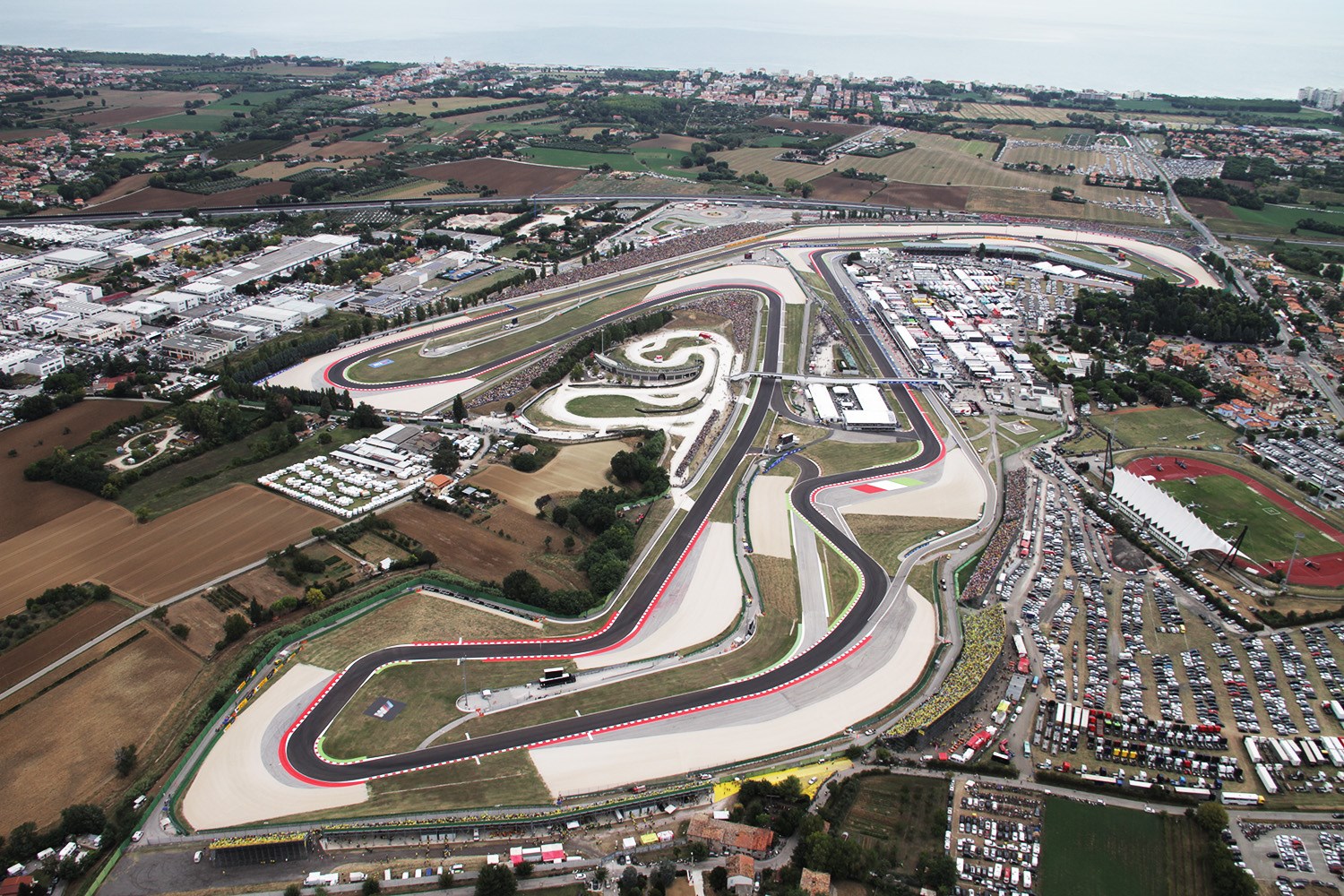 It is now or never for Marc Maquez’ championship rivals, as MotoGP resumes this weekend at the spectacular Misano World Circuit Marco Simoncelli.

Misano seldom produces a dull race. Indeed, since the circuit returned to the MotoGP calendar in 2007, it has played host to numerous classic moments  such as: The arrival of Marco Simoncelli as a serious premier class contender in 2010. Pedrosa practically shoving Marquez out of his way en route to victory in 2016. Heartbreak for Danilo Petrucci (Pramac Ducati) as he came so near to a famous victory last season in horrendous conditions.

This year will be no exception, as the first serious hammer blows in this year’s championship will be played out on Sunday to the best part of 100,000 spectators. There may well also be an element of desperation from the title protagonists, following the washout at Silverstone a fortnight ago.

The abandonment of the British Grand Prix has made life this season considerably easier for Marquez and the Repsol Honda team. No race being run means that a potential 25 points for his closest rivals were removed from the table. Where there had been a maximum of 200 points, now there is only 175 remaining this season. Having already established a lead of 59 points at the top of the standings, the road to becoming a 5 time premier class champion (and match the achievements of the great Mick Doohan) is now even more clear.

Firm favourite Marquez is, but to say he has got the championship effectively won already would be grossly inaccurate. Grand Prix racing, more than any other sport, has a habit of biting back. With this in mind, the factory Ducati team will be pushing hard to claw back the deficit. With Jorge Lorenzo and Andrea Dovizioso now a seemingly constant presence both on the front row and on the podium each week, one slip up from Marquez and the championship is blown wide open for the flyaway races.

However, it is not only Ducati who are still in the championship fight this season. Despite not having taken a race victory since the Dutch TT in 2017, Valentino Rossi (Movistar Yamaha) is the closest challenger in the standings to Marquez with 142 points. Incredible testament to the sheer consistency of the 38-year old Italian. The 9 times world champion has defied the bike, despite criticism of the machine from his teammate Maverick Vinales, the crew chiefs, journalists and just about everyone close to the team. Whilst Vinales has looked despondent with the bike at times this season – in fairness, most riders would be the same – Rossi has worked tirelessly. Sacrificing single lap performance for the sake of getting the setup right for the races. He has always done this, but in 2018 has had to take it to the extreme – being a regular in Q1.

Movistar Yamaha appear to have made a step forward with the M1, following two private tests last month at Misano and Aragon. Understanding the Magnetti Marelli ECU has been a constant thorn in the side for the Japanese manufacturer. Despite having a bike which is regarded as the most mechanically sound machine to race, they have struggled to synchronise the new electronics, which has compromised the performance of the bikes at every turn – both literally and metaphorically.  At Rossi’s true home round, the team will be desperate more than ever for a return to winning ways.

Pol Espargaro is set to return for the Red Bull KTM team this weekend. The Spanish rider was forced to sit out the Austrian and British rounds after sustaining multiple injuries – including a fracture of his collarbone – at the Czech Grand Prix, back in August.

Tito Rabat (Reale Avintia Ducati) will miss this weekend as he continues his recovery following a horror crash at Silverstone, which left him with multiple fractures to his right leg. Replacing him this weekend, and making his MotoGP debut, is Christophe Ponsson. The French rider has been a regular front runner this season in the CEV Superbike Championship (which supports the Moto3 and Moto2 junior series).

The San Marino grand prix is also the final chance this year for the Gresini Aprilia to put on a good show in front of their home crowd. To say this season has been a struggle, would be a serious understatement. Aleix Espargaro has at least provided brief moments of cheer for the team, with some serious single lap pace regularly demonstrated during qualifying. With upgrades promised to both Espargaro and teammate Scott Redding for this weekend, both bikes finishing the race in the points would be a welcome sight indeed.