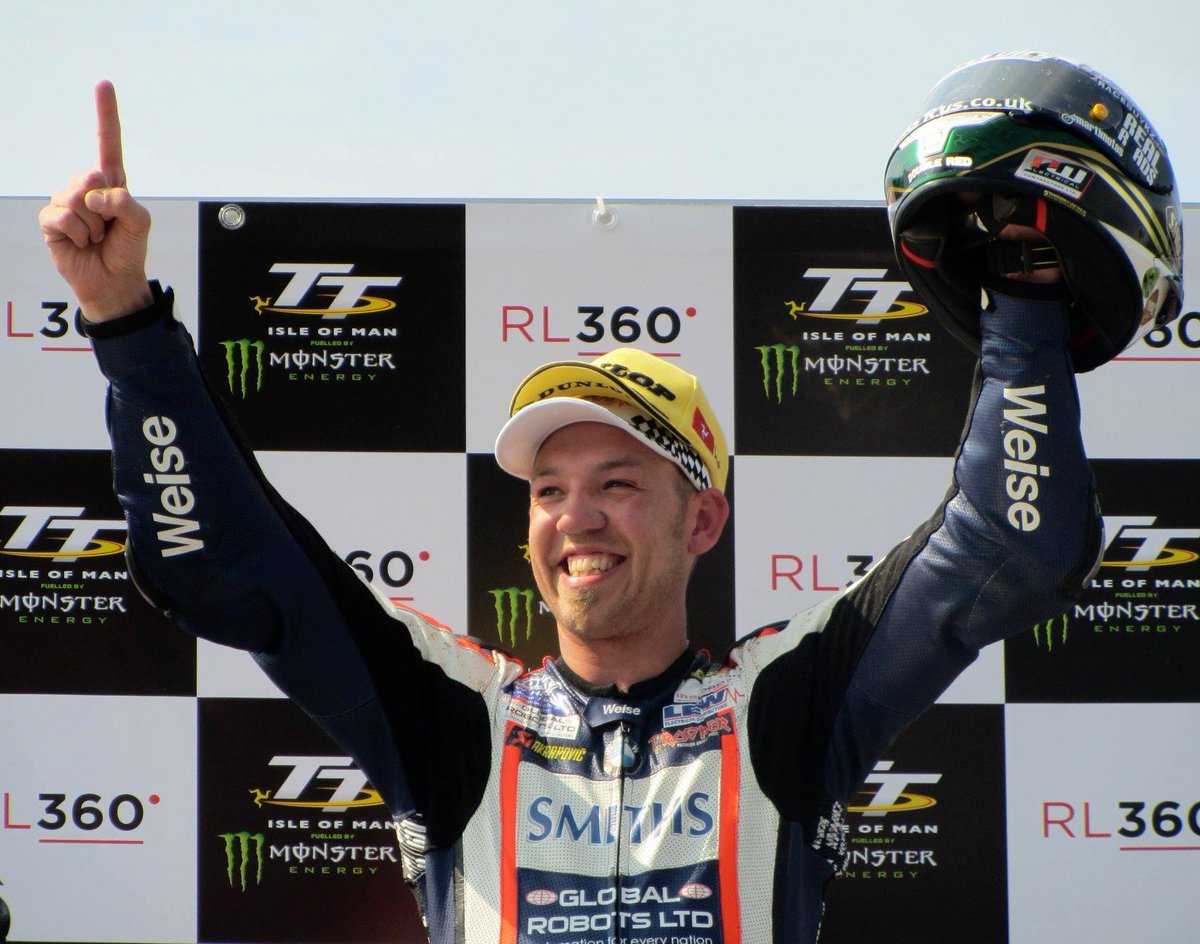 The wait for a maiden TT victory finally ended this afternoon for Lincolnshire rider Peter Hickman, as he held off Michael Dunlop over four pulsating laps of racing.

As has been the case with the previous two contested races, Conor Cummins (Padgetts Honda) was the first rider to set off down Bray Hill, and once again was soon overhauled by the rampaging trio of Dean Harrison (Silicone Engineering Kawasaki), Michael Dunlop (MD Racing BMW) and Peter Hickman (Smiths Racing BMW). This time however, there was nothing Cummins could do to even offer any resistance, as his Honda began losing power over the first ascent of Snaefell. The Manxman ground to a halt at Governor’s Bridge, his fortunes this week so far in tatters.

The trio matched each other almost exactly over the opening lap and were in a league of their own – distancing the overall fourth placed contender, Dave Johnson (Gulf BMW) by over 15 seconds. By the end of the race, the gap from the top three to the rest would be an enormous 1 minute and 21 seconds.

As the riders thundered over Ballaugh Bridge, Dean Harrison was dropping back behind Dunlop and Hickman – almost certainly testament to the efforts he’d put in to his Superbike and Supersport challenges. Although unable to contest for the top spot this time, the Yorkshireman never let the leading duo out of his sights, and securing third place and his third podium of the week.

Hickman and Dunlop were left to duke it out for what will surely go down as one of the greatest TT races since the turn of the millennium. Having entered and then left the pit lane together, following their one and only stop, the pair traded fastest sector times from the Grandstand to the Bungalow. Dunlop braved it out on the descent, pulling out a small margin of 1.8 seconds by the time they passed Cronk-ny-Mona. The smallest of advantages to the Ulsterman heading into the final lap.

Hickman responded by taking a full second off Dunlop by the time the bikes thundered through the trees at Glen Helen. The gap was down to just 0.5 seconds by the time the pair made the turn at Douglas Road Corner and blasted into Kirk Michael.  Dunlop hit back and again had almost a full second over his rival, as they rounded the Ramsey hairpin for the final time. Hickman clawed a few tenths back as he wound up the Gooseneck. Dunlop pulled out a couple of tenths as he shot through Verandah. Nothing between them. Hickman kept the throttle pinned as he passed Kate’s cottage and tore off towards Creg-Ny-Baa.

Dunlop crossed the line first with a finishing time of 1 hour, 8 minutes and 54 seconds. Thirty agonisingly long seconds later, Hickman’s bike fired out of Governor’s Bridge and roared across the line at the Grandstand. The Brit had done it by 4 seconds. He has wins in British Superbikes to his name, on the roads he’s the master of the Dundrod circuit (which hosts the Ulster Grand Prix). Today, he can add the Isle of Man TT to his CV.

There were, understandably, highly emotional scenes in the winners’ enclosure. Hickman having to stop himself on more than one occasion as he was interviewed by Manx Radio. Who could blame him for being unable to completely fight back the tears? He had put everything into that race, and today Lady Mona had smiled upon him.

Despite not being on the podium, Dave Johnson’s race was no less eventful that the podium finishers. He was involved in a fierce battle of his own with James Hillier (Quattro Plant JG-Speedfit Kawasaki) before he finally secured fourth place.

Michael Rutter (Bathams BMW) and Martin Jessop (Riders Motorcycles BMW) both had solid races, coming home in P6 and P7 respectively. However there was an excellent scrap between Sam West (PRL-Worthington BMW) and Ivan Lintin (Dafabet Devitt Kawasaki) over eighth place. The two, although finishing almost a minute apart on the road, they were inseparable throughout the race on corrected time. West took the honours, finishing ahead by 2 seconds. Around a 150 mile race, it simply does not get any closer.

Rounding out the top ten, and increasingly becoming a sensation in his own right, is TT newcomer Davey Todd (Burrows Engineering Suzuki). The former National Superstock 600 race winner has made the transition to real road racing seamlessly during the meeting. He finished just 3 minutes off the leaders’ times. Remember the name, as it won’t be long until he steps up onto the podium.

The riders will now take stock, and with the majority having contested two gruelling races today, will rest up ahead of the resumption of racing on Wednesday. Whether Lightweight class, Supersport or Superbike – it is going to have to take something truly extraordinary to top this race today.