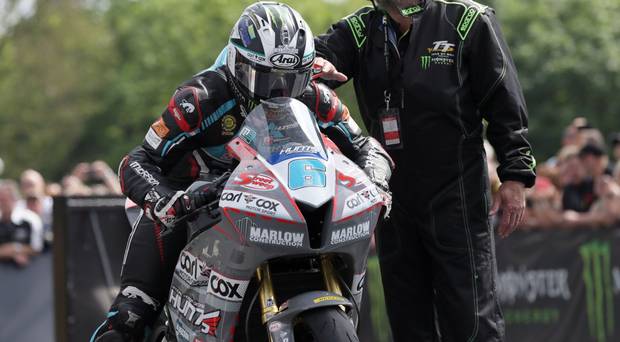 Michael Dunlop (MD Racing Honda) made it two wins out of two this week on the island, as he claimed his seventeenth victory around the TT course.

Whilst Saturday’s triumph had come aboard the 1000cc Superbikes, this morning’s race was contested on the smaller 600cc machines. Smaller in engine size, and slower in lap time – just as fiercely contested.

Desperate to make amends following his retirement last time out, Dean Harrison (Silicone Engineering Kawaski) once again set the early pace. The ‘Bradford Bullet’ taking the lead, on corrected time, at the first time check at Glen Helen. The Yorkshireman broke the record from the Grandstand to Ballaugh (from the standing start) and for all money like he was on course to smash yet another circuit record.

Dunlop had other ideas.

Clawing his rival back in over the mountain road, the Ulsterman closed in on his rival and claimed the lead of the race for his own as he passed the checkpoint at The Bungalow.  Not content with just the race lead, the 29-year old blasted out the Supersport lap record, next time around, with an astonishing average speed of 129.197 mph (17 minutes and 31 seconds). Harrison was not far behind – the gap between the leaders was a mere 4 seconds as the pair entered the pit lane for their one and only stop of the race.  Crucially, Dunlop was the only rider of the top ten to opt for a new rear tyre. A decision which would prove

With the knowledge that he would not run out of grip over the remainder of the 150 mile race, Dunlop began to turn the screw on his rivals. Although not threatening his new lap record – in fairness, he did not need to – he slowly closed down on Harrison until they were together on the road. A quick glance from Harrison over his shoulder on the approach to Ballaugh, and he saw the Northern Irishman bearing down on him. Try as he did to reduce Dunlop’s lead – he tried so hard he knocked the transponder off his machine as he brushed the wall at Guthries – he could not be shaken off.

Behind the leading duo, came a thrilling battle for the final place on the podium. Peter Hickman (Trooper Triumph) and James Hillier (Quattro-Plant Kawasaki) traded personal best lap times throughout the entire race, culminating in a thrilling dice over the final climb of Snaefell mountain. From Glen Helen to Ramsey, it was Hillier who had the advantage, inching out a couple of seconds to his rival. Hickman, however, was in a different league from the Goosneck to the Grandstand.  The British Superbike race winner blasted the fastest crossing of the mountain road, ensuring that it was he who rounded out the podium. Like Harrison, Hickman was a non-finisher in Staurday’s Superbike TT race, he will be delighted to have finished in third place today.

Further back, Josh Brookes (McAms Yamaha) entertained the spectators by climbing up from tenth into P6 on the final lap – setting his personal best time in the process. It was another strong result from the 34-year old Australian, backing up his top ten finish aboard the Norton SG6 on Saturday. Such was his pace on the final lap, he managed to finish 8 seconds clear of his nearest rival Gary Johnson (RAF Regular and Reserves Triumph). Rounding out the top ten were Lee Johnston (Padgetts Honda), James Cowton (McAdoo Kawasaki) and Ivan Lintin (Dafabet Devitt Kawasaki).

It was another difficult race for Ian Hutchinson (Padgetts Honda). The 14x TT race winner continues to struggle with his injury problems, and could only manage to finish in P16. The 38-year old has effectively written off this year’s races from a performance perspective. Instead, the Bingley-based rider is focusing on clocking up the miles, in preparation for next season.