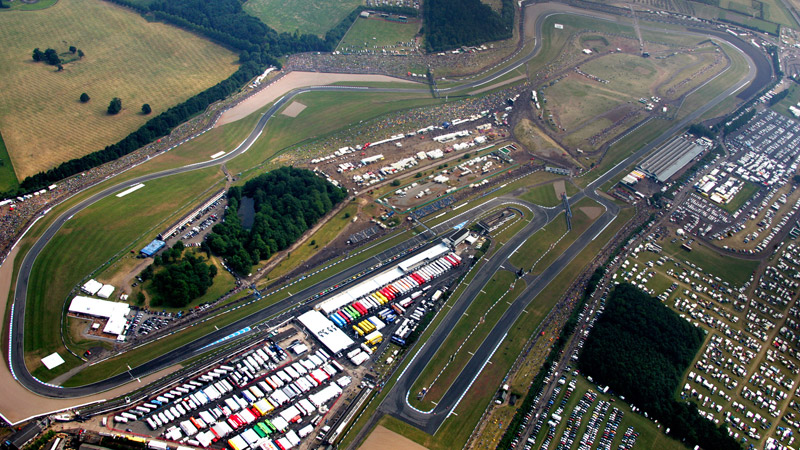 Thirty years ago, on April 3rd 1988, the FIM World Superbike Championship roared into life at the Donington Park circuit as Italian rider Davide Tordozzi, astride a Bimota machine, claimed the first ever race win in the series. As with  the passing of time, manufacturers have come and gone – Bimota being much lamented – and the circuit has changed too. Then the Superbikes diced on the shorter 1.98 mile ‘national’ confuguration. When the lights go out at 13:15 BST on Saturday for race 1, the gladiators will be on the famous 2.5 mile grand prix layout.

Equally, the attitude of the spectators has changed. Where there was intrigue in 1988, there is now expectation in 2018 as Jonathan Rea (Kawasaki Racing Team) seeks to claim the record for number of race wins in the series, this weekend.

The reigning triple world champion arrives at his home round with a healthy 47-point lead at the top of the standings, following his stunning double last time out at Imola. With its mix of medium and high speed corners, and lack of long straights, Donington Park is a circuit which plays to the strengths of both Rea and his ZX-10RR machine. Having equaled the great Carl Fogarty with 59 race wins, there could be no more fitting venue than here for the record to be broken.

Standing in his way is his team-mate, Tom Sykes. The Yorkshireman has an imperious record around the east midlands track, having recorded a current total of 9 victories. Furthermore, Sykes has not finished outside of a podium position in any of the last 12 races to be held here. The British round of the 2018 season could not have arrived at a more needed time for the Kawasaki man. After the opening five rounds Sykes finds himself in third place in the standings, but a daunting 72 points adrift of Rea. Donington Park is Sykes’ fortress. Nobody can boast as strong a record around this place as he can. Be assured, he will going out all guns blazing to get back into the championship fight, this weekend.

Aruba.it Ducati will be desperate to bounce back after failing to win either of their home races last time out. Despite podium finishes for both Chaz Davies and Marco Melandri, the powers that be in the Ducati Corse department declared the Italian round a disaster, and arranged an ’emergency test’ at the Mugello circuit for the team last week. There is no doubt that the team are now at a crossroads in terms of the development of their machines. Ducati have not been shy of making it known that from 2019 they will field their new V4 Panigale model. As such, the question is now being asked up and down the paddock: how long will the team persist with the 1199 v-twin Panigale, or will they begin to focus their full attention on developing next year’s challenger? With Davies being the closest championship contender, sitting in second place on 162 points, the message from the top brass in Bologna could not be more clear – podiums are not good enough, we’re here to win.

One team who would be satisfied by scoring a podium finish or two this weekend would be the Pata-Yamaha outfit. Michael van der Mark will be desperate to make up for his error last time out at Imola, crashing out in race 2 when he was well set for a good points haul. The Dutch rider has enjoyed a solid start to the season, finding himself in sixth place in the championship with 113 points. Additionally he finds himself leading his team-mate, Alex Lowes (92 points). The Brit had a difficult weekend at Imola, losing a considerable amount of track time during Friday practice, due to a serious mechanical fault with his R1 machine. As a consequence, he was left scrapping across the two races for minor points. Donington is a circuit which the 27-year old has consistently gone well at throughout his British and World Superbike careers. This includes securing Pata-Yamaha’s first podium finish here last year. A repeat performance would relaunch the Lincolnshire man’s campaign.

The battle between the independent riders will be as fierce as always. Whilst it is now a given formality to expect the likes of Xavi Fores (Barni Racing Ducati), Leandro Mercado (Orelac Racing Kawasaki) and Toprak Razgatlioglu (Pucetti Kawasaki) to mix it with the established factory front runners, a new name was catapulted to our attention last time out: Michael Ruben Rinaldi (Aruba.it Ducati Junior Team). Whilst his talent was clear during his time in the Superstock 1000 class last season, nobody expected the 22-year old from Rimini to adapt to life in Superbikes quite so quickly. Unlike the rest of the field, Rinaldi is only competing in the European rounds of the season – a decision made by Ducati to ease his transition into the top class. At Imola he became one of the youngest riders to ever lead a World Superbike race, to underline his potential.

As we’re at Donington this week, there are a number of British wildcard entrants competing this weekend. The most prolific of these being current British Superbike championship leader, Leon Haslam (Pucetti Kawasaki). Having stormed to a podium finish in race 1 last year at this venue, Haslam was always going to return. He also made an appearance a fortnight ago in Italy, manage to secure decent points in both races. At the track where he’s completed more laps than anyone can count, the home crowd will be expecting big things from their local hero. He has the talent and the bike to cause a big upset to the favourites. Joining him will be Mason Law (WD40-Kawasaki) and the young sensation Bradley Ray (Buildbase Suzuki). For Ray, it is a big opportunity to draw the attention of the bosses of the world championship teams. Its no secret that he sees his long term career on the world stage – whether that be in Superbikes or Grand Prix racing. Having secured an emphatic brace of victories here back in April in BSB, he should be competitive from the start this weekend.