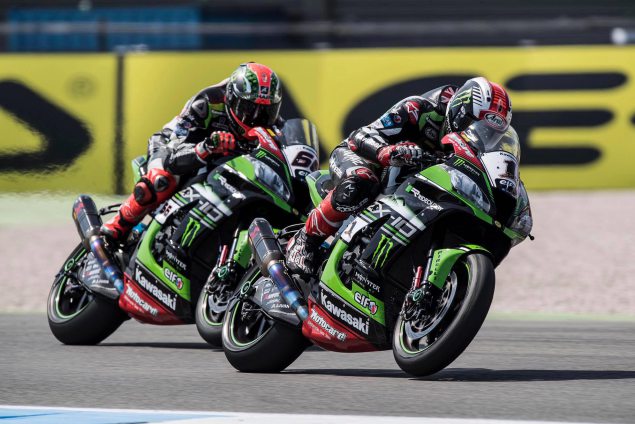 Jonathan Rea and the Kawasaki Racing Team cranked up the pressure on their championship rivals with a blistering performance, leaving all and sundry reeling in their wake.

The timing at this point in the season and the venue only made the victory sweeter for the Japanese factory team, at the spectacular Autodromo Enzo Ferrari di Imola, in the Bologna region of Italy – Ducati’s home round.

Having qualified on pole position for the sixteenth time in his career, Rea made the perfect launch from the grid as the lights went out, and never looked back. As so often is the case with the 3x world champion, once he’d found his rhythm it was impossible for anyone to close the gap. Even Tom Sykes (KRT) on identical machinery could offer no answer to the pace and consistency of the Northern Irishman. Such was the performance of the Kawasaki ZX-10RR machines, Sykes was able to establish his own commanding lead in second place over the chasing riders behind.

The factory Aruba.it Ducati team will be wondering how their rivals had so comprehensively outperformed them. On a track which their lead rider, Chaz Davies, had secured victory in the four previous races to be held at the circuit. Unlike messrs Rea and Sykes, Davies suffered a poor race start – wheel spinning off the line and becoming engulfed in the mid-pack shenanigans on the run down to the Tamburello chicane. P4 was the best Davies could ultimately manage, but due to the quirky reverse grid format for Race 2, it does mean he will start from pole position tomorrow.

Instead of challenging KRT for honours, the Ducati riders were left to fight amongst themselves for the final place on the podium. Marco Melandri (Aruba.it Ducati) emerged victorious from the in-house fight to claim the final spot on the podium, though not before he had fended off another strong challenge from Spanish rider Xavi Fores on the independent Barni-Racing Ducati. Fores eventually finished in P5 behind the two factory riders, but it was another display which showcased the breakthrough season the 32-year old is having. Behind him came young Italian protege, Michael Ruben Rinaldi (Aruba.it Ducati Junior Team), much to the delight of the home crowd. Despite only entering his third round of the season, Rinaldi has adjusted to life from Superstock racing. Although he faded in the final laps due to tyre wear, his result in P7 (with a fastest lap of 1″47.536) underline his potential.

It was a testing day for the Pata Yamaha outfit with both riders, Michael Van der Mark (P6) and Alex Lowes (P10), unable to hold pace with their front running rivals. The latter in particular had been on the back foot since Friday, after an engine issue forced him to sit out the entirely of the first practice session. Lowes spent the race fighting with the two Pucetti Kawasaki bikes of Toprak Razgatlioglu (P11) and wildcard entrant Leon Haslam (P9).

One team who suffered a complete disaster was Red Bull Honda. Having attempted to ride during Friday morning practice, Leon Camier ruled himself out, still suffering with injuries sustained at Aragon last month. His replacement, flown in from British Superbikes, was Jason O’Halloran. with just one practice session to his name, the amiable Aussie out-qualified American teammate Jake Gagne. However that was to be as good as it got as, early in the race O’Halloran crashed out at the fast Villeneuve chicane and had to be transported to hospital. Gagne (P16), struggling with the front end feeling of the bike throughout the weekend so far, failed to finish in the points.