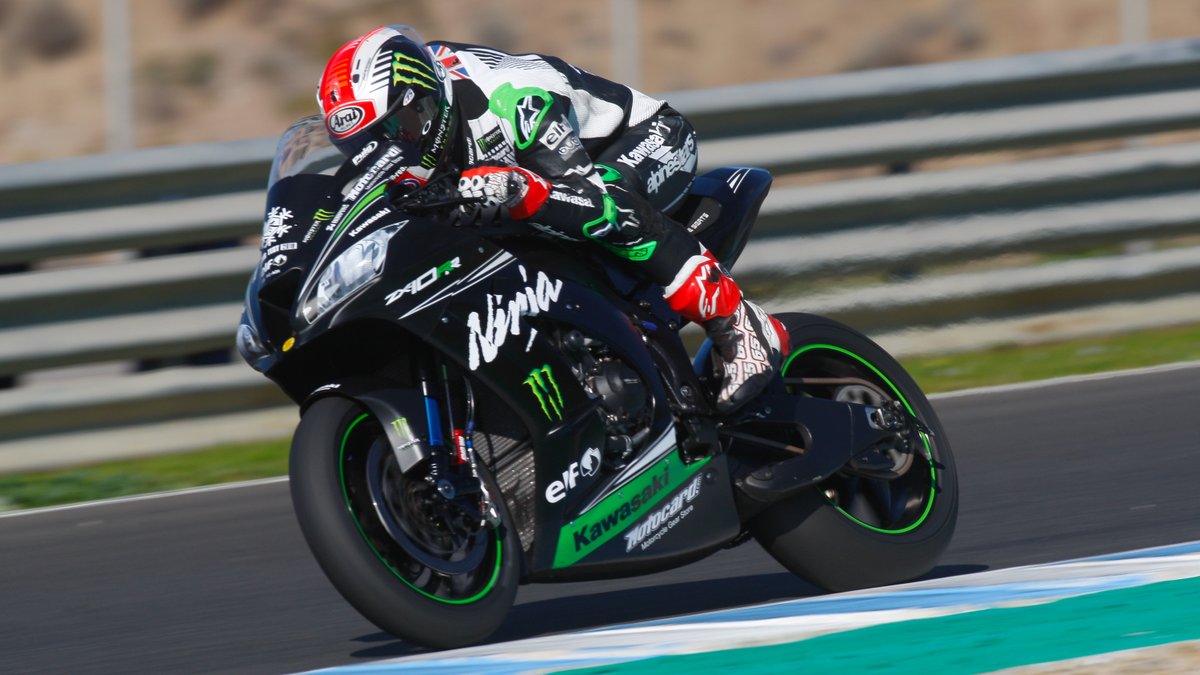 The long winter break at last ended this week at the Circuito de Jerez, as the World Superbike competitors took part in the first pre-season test. Despite the weather conditions being closer to British standards than Iberian, with a steady band of fog hovering over the circuit on both mornings, the teams and riders were eager to make the most of the time available to them.

Kawasaki Racing Team appear to have picked up in 2018, where they left 2017: out in front of the pack. This should not be surprising, the Japanese factory team dominated the championship last year with both riders, Jonathan Rea and Tom Sykes, taking the Lion’s share of the spoils. The latter took the honour of being the fastest of all across the test setting a time of 1:38.889, half a second quicker than Rea and then the rest of the field. KRT have spent the majority of the meeting focusing on race pace, with both riders completing multiple long runs across the two days. Ominously for their opposition, neither of the two ever found themselves lower than fifth place at any time. Sykes’ final lap time underlining the sheer gulf in performance (0.719 seconds) of the factory Kawasaki bikes to the rest of the competition.

At face value, the Abruba.it Ducati team would appear to also have continued in the same vein as last year: second best, but with the potential to fight for race wins at tracks which suit the strength of their bikes. Once again, the Bologna based factory team have Chaz Davies and Marco Melandri piloting the Panigale R machines. Not wanting to reveal too much to their chief rivals, the team focused purely on setup work and long data gathering runs. This was reflected in Davies’ finishing place of P11, 1.83 seconds adrift of Sykes’ fastest time. Although Melandri (1:39.754) did take a headline grabbing P3 at the end of the final day, he was still almost a full second away from the top spot. It is worth remembering that Davies is still recovering from injuries sustained at this circuit at the end of last season. The team are confident he’ll be fully fit come the opening round in Australia next month.

It would however be wrong to assume at this early stage that the championship is a foregone conclusion. The chief opposition to the men in green looks like it might come in the shape of a resurgent Red-Bull Honda team. Whilst we must always take results from testing with a pinch of salt, it does look like Honda will be firmly putting a dreadful 2017 campaign into the box labelled “Dark and Distant Memory”. It is all change with the riders for the new year. Jake Gagne, the 25 year-old Californian, has made the full time switch from the MotoAmerica championship, following an impressive debut at Laguna Seca last season. The team have been quick to emphasise that he will take time to adjust to the bike and as such should not be judged quickly. As such, the American’s side of the garage purely focused on his general bike setup this week. To compliment the signing of the rookie, Honda have acquired the services of one of the most experienced riders in the sport, Leon Camier. The British rider, moving from MV Agusta, took next to no time to adapt to the Fireblade CBR1000RR SP2 and was a constant presence at the sharp end of the time sheets, securing an impressive P3 in the dying minutes of the final day with a time of 1:39.608. Of course the season is still yet to begin but compared to where the team was this time last year, it was about as perfect a start as the team could have wished for.

Pata-Yamaha will also be quietly satisfied with the work completed over the past two days. The early signs are that the factory supported outfit appear to have caught up with rivals Ducati. Alex Lowes (1:40.398) was a permanent fixture inside the top five for the majority of the test, leading the team’s charge ahead of teammate Michael van der Mark (1:40.532). Despite their final standings being dropped down to P7 and P8 respectively, this was simply due to the team not electing to do a low-fuel ‘qualifying style’ run at the end of Wednesday’s session. Additionally, the team had test rider, Niccolo Canepa, on hand to help with the setup work. Together, the three riders completed an impressive 411 laps across the two days. Canepa did however set a hot lap of 1:39.524 at the end of the test to confirm the apparently strong position the team find themselves in.

Elsewhere there was close competition for the privateer teams who make up the rest of the competition. Fresh from the MotoGP paddock Loris Baz (Althea-BMW) marked his arrival to Superbikes with a very promising P10 finish, and within 2 seconds of the full factory supported teams. He headed a group of more experienced competitors in the category including Lorenzo Savadori (Milwaukee-Aprilia) and Ondrej Jezek (Guandalini Racing Yamaha). The former struggled at Jerez, reportedly unhappy with the balance of his machine, and could only finish 15th with a best time of 1:41.411. The team did at least have a more encouraging test with their second rider, Eugene Laverty (1.39.876), who secured a top 5 placing and ensured the team move forward in the pre-season with a degree of optimism and confidence.