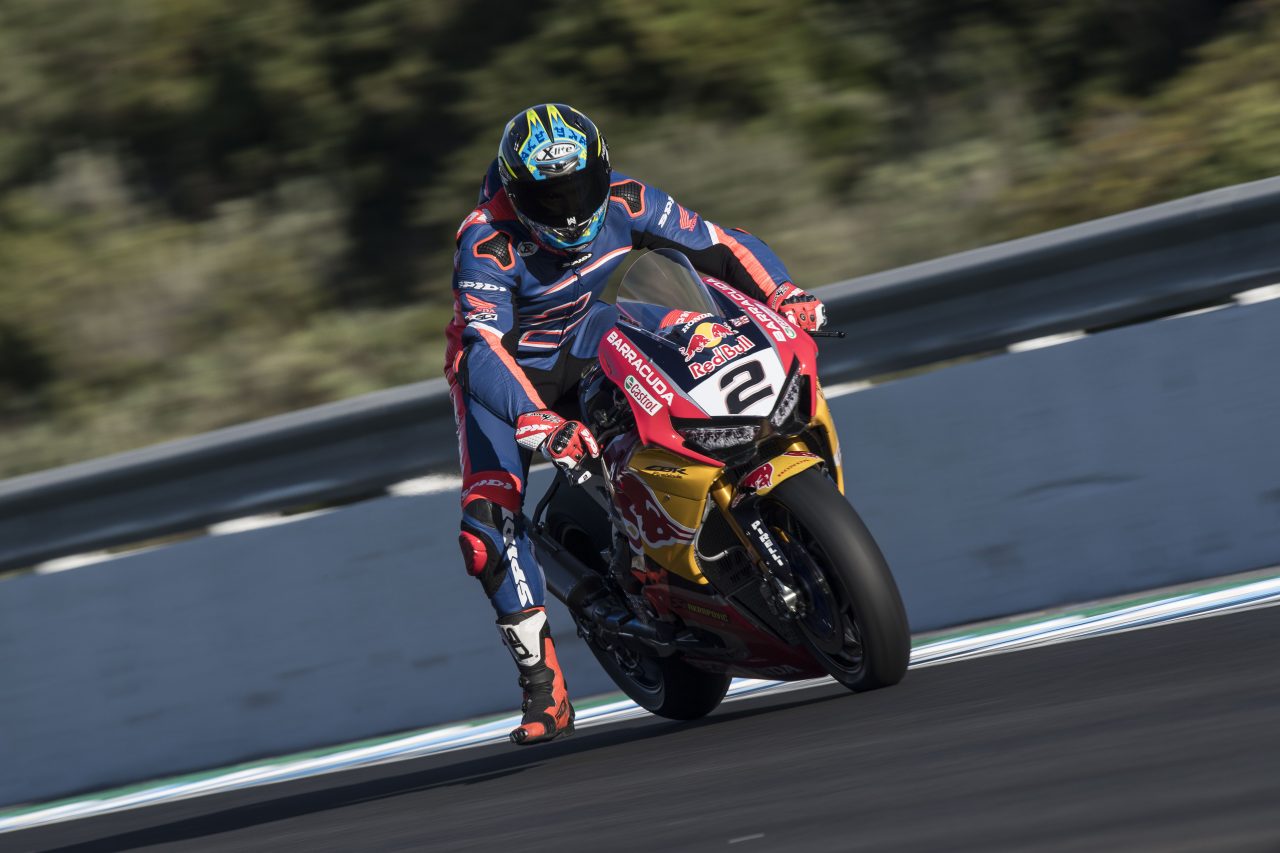 This time last year, following the opening pre-season test, Red Bull-Honda knew they were in a world of trouble. The new Fireblade CBR1000RR had caught everyone, including its makers, by surprise and alarm. The bike was slow and unresponsive. Tune the engine, change the suspension dampers, short swing-arm, long swing-arm, alter the rake – they tried every trick in the book, but the bike would not yield. Perplexing both engineers, mechanics and riders, the season was a long and painful affair. The end of season could not arrive quick enough.

Fast forward to the Circuito de Jerez this week. The demons appear to have been banished.

Spearheading this resurgence is one of the most experienced men in the competition, Leon Camier. The 31 year-old British rider has moved across from MV Agusta, and has immediately made his presence felt. He was obviously in good spirits following a very promising 3rd place finish in the opening pre-season test this week.

LC: I’m really happy with how this test went, we’ve made some good progress and I’m learning the bike more and more. There’s still a lot I’d like to work on at the next test in Portimao and I think as I ride this bike on different tracks I’ll be able to get even more out of our package.

A veiled warning to the likes of Pata-Yamaha and Aruba.it Ducati? Yes. It is true that a rider takes time to adapt when joining a new team, riding styles must alter to get the most out of a different bike. This is no different to someone of Camier’s experience with 185 race starts to his name. Nevertheless the early indications are that he has already got himself ‘dialled in’ as they say. Having spent the previous two seasons wringing the neck of an out of date MV, Camier has the hunger to prove himself in a larger, factory supported team. Additionally, his riding style has already been honed to handle a more volatile machine – which this Honda still is.

The majority of the team’s efforts in Jerez were focused on reliability and race-pace. With multiple long stints with a high level of fuel on board, a spectacular showing was not expected. True to the illogical nature of racing, a spectacular showing was what we got. Rarely outside of the top ten throughout the entirety of the test and reaching lap time parity with the likes of the Yamaha and Ducati outfits, it was a much needed return to form for the whole team.

There can be no doubt that the seemingly wholesale turnaround in the team’s fortunes is a truly collective effort from everybody involved. From the riders and the mechanics, to all those personnel who work back at HRC, it is clear that everyone involved has risen to the challenge. This was a fact not lost by team manager, Kevin Bos.

KB: The Jerez test was a success from a team point of view as we managed to test a lot of new components and made some solid improvement with the CBR1000RR SP2. Leon made some big steps with the bike compared to the test here in November and we were able to find a really good balance with the Fireblade which not only helped improve performance but also gave some benefit in terms of tyre durability. We’re looking forward to keeping the momentum going at Portimao in a few days time

Of course, we will not know fully how close the team are to competing at the front of the field until the opening race of the season at Phillip Island, next month. However one thing is certain, the Red Bull-Honda outfit are already in a much better place than at any point last season.