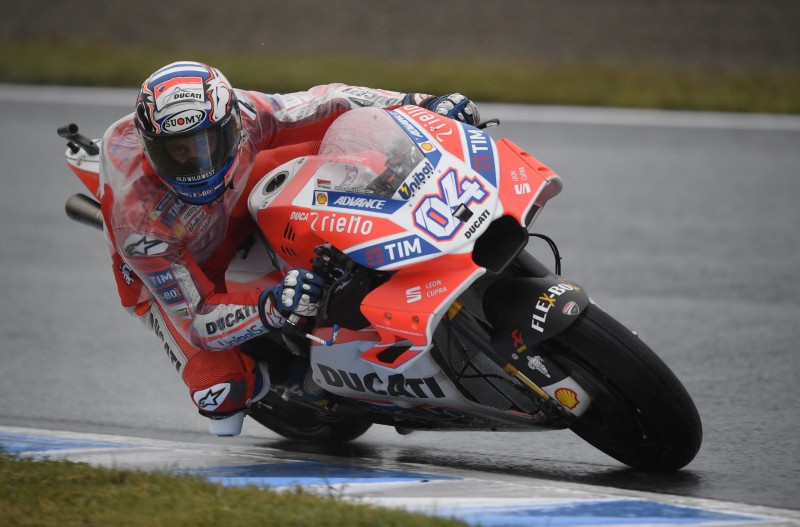 The fight for the 2017 MotoGP World Championship was taken to yet another level as Marc Marquez (Repsol-Honda) and Andrea Dovizioso (Ducati) duelled and diced in appalling weather conditions.

Today was  a very good day.

Both riders initially had to work their way to the front after Jorge Lorenzo (Ducati) and Danilo Petrucci (Pramac-Ducati) made the best starts to lead the race in the early stages. The latter leading for the first half of the grand prix, as was the case a month ago at Misano. As then, Petrucci was left ruing that his career should coincide with those of Marquez and Dovi. The two chose their moments and, once cleared, pulled clear with ease and consigned Petrucci to yet another third place – his third of the season.

With the satellite rider dealt with, we were treated to a thrilling contest between the two riders who have been head and shoulders above the rest this season. Despite having clear air and (more importantly,) clear vision, Marquez could not pull clear of his championship rival. The Spaniard tried every trick he could to break clear, but was matched blow-for-blow, by Dovizioso, never allowing the gap between them to grow to more than a second. With seven laps left, the Italian made his first move to take the lead. Initially taking his rival by surprise and, within the space of half a lap, found himself with a lead of several bike lengths.

The three-time premier class champion, however, was in no mood to settle for second. The gap between the pair was eradicated, and the Honda spent a few laps practically glued to the Ducati’s tail. With three laps to go, Marquez forced his way past Dovi with a textbook block pass at turn 3. Roles were reversed and the defending champion began to slowly edge away.

However it still wasn’t over. On the final lap, he was forced to roll off the throttle at turn 8, as his Honda machine lost traction and almost launched itself into the gravel. Momentum lost, Dovizioso was back on his tail. Out-dragging his rival down the back straight, the Ducati retook the lead under the bridge. A brave manoeuvre through the penultimate corner briefly saw Marquez go back in front, but overshot the entry to the final corner. He stayed on track, but it cost him dear.

Hooking up the apex, killing the wheelspin, the man affectionately known to his legion of supporters as ‘DesmoDovi’ blasted across the line to claim his fifth win of the year, and now just 11 points off the championship lead, with 3 races to go.

Behind them it was a day to remember for Suzuki. Not content with having achieved their best qualifying performance of the season on Saturday (both riders qualified inside the top 10), they took the race by storm with Andrea Iannone and Alex Rins finishing fourth and fifth respectively. The team’s performance has been greatly aided this weekend by the addition of their new front fairing, comically dubbed ‘The Moustache’. This seems to have solved much of their well documented front end issues, which has plagued the team all season.

Yamaha had an absolute nightmare of a weekend, particularly Maverick Vinales. After a poor qualifying performance left him starting the race down in P14, the young Spaniard laboriously toiled on an uncharacteristically difficult machine. Never feeling comfortable on the bike at any point this weekend, the best he could do was finish in P9. It all but takes him out of the championship running. His teammate, Valentino Rossi, fared worse. Having to start from twelfth, it was always going to be difficult for the still injured 38 year-old. He crashed out on lap 5, but fortunately did not look hurt. The team have got a lot to do to put things right for the next race, in Australia, next weekend.

It was another solid weekend for Aprilia with Aleix Espargaro picking up another handful of points with 7th place. The tiny Italian manufacturer continues to punch well above its weight in the premier class, with a constant stream of updates arriving for their top rider at almost every round. There were celebrations from both sides of the garage as Sam Lowes claimed 3 points with his P13 finish and the honour of being the first British rider to finish the race. It has been a difficult year for the Lincolnshire man, but this result should hopefully see him produce a strong finish to the season.

Elsewhere it was a case of missed opportunities for KTM. Having qualified on the third row of the grid (P7 and 8), the team will be disappointed that they could only bring home 5 points from the race, courtesy of Pol Espargaro’s eleventh place finish. As has been the case for most of the season, he was the only rider in the team to register points, after Bradley Smith finished way back in P17.

One Reply to “Determined Dovizioso Wins Battle Royale At Motegi”