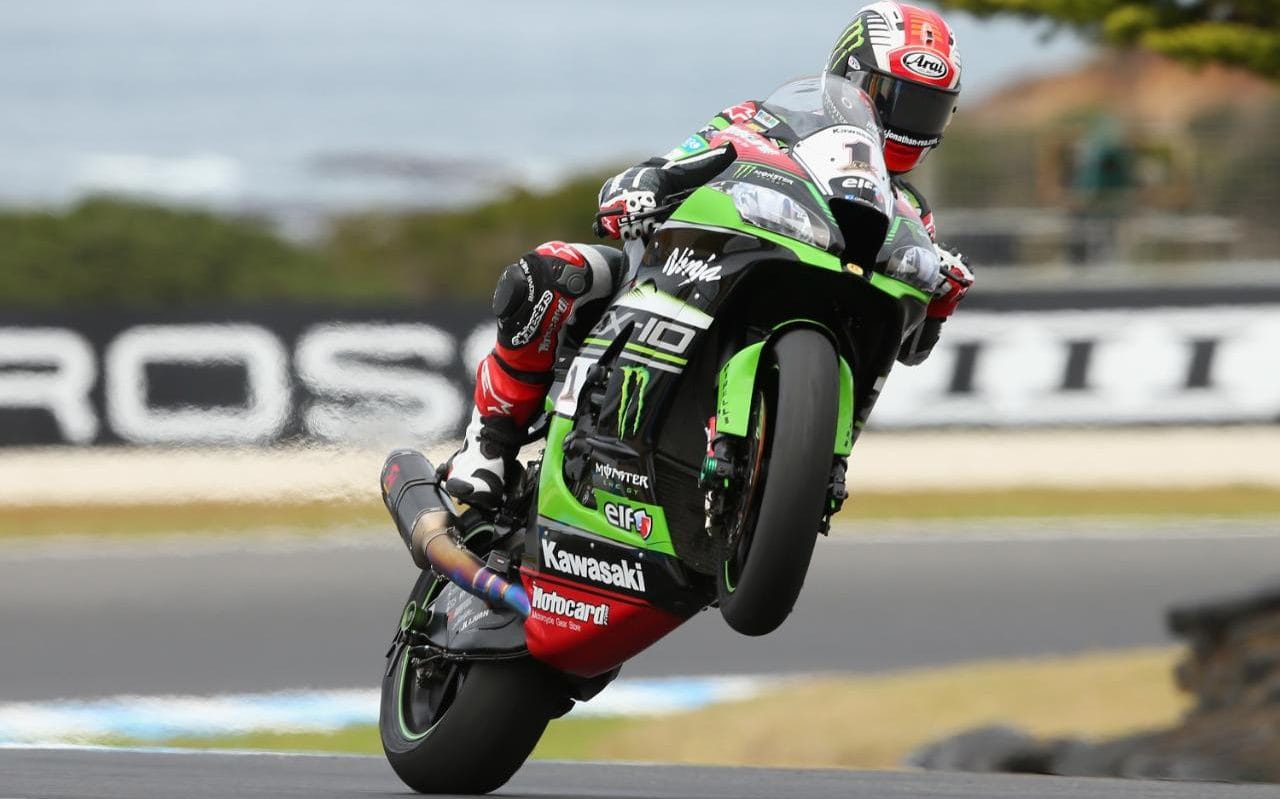 Such is the technical nature of the Magny-Cours circuit that the best will shine whilst the others flounder. That could not have been more apt for Jonathan Rea, on board his factory Kawasaki, on Saturday. Starting from pole position, on a sodden track, Rea commanded control of the race in every aspect, from lights to flag. His launch was superb, by the time the field had made there way to the Adelaide hairpin at turn 5, Rea had already opened up a gap approaching 3 seconds. Whilst others battled with their machines for traction, every turn was a dream for the 30-year old, with rider and back at one mastering the conditions with a freakish ease. His speed in comparison to the field was astonishing, on average over a second per lap quicker than his main rivals. The personnel manning his pit board regularly displayed the message “Relax. Slow Down”, fearing his pace was unsustainable throughout the race and a crash was imminent. This was not Rea’s way. Not today. For the Northern Irishman there was only one way to win the title this season – with a win to blow all opposition out of the water, and boy did he do just that. A true champion’s ride from arguably the most dominant champion the World Superbike paddock has ever seen.

Whilst Rea was enjoying the perfect race, Chaz Davies (Aruba.it Ducati) was falling foul of the perfect storm. Despite briefly climbing up into a podium position on the early laps, this was as good as it would get. His bike began to struggle with the conditions, especially through any sections which required hard braking and subsequent hard acceleration. The problem only worsened as the circuit began to dry out in the latter half of the race. It was a disastrous turn of events for the rider as he slipped back to tenth place, unable to resist any of his rivals. It later transpired after the race that the Welshman’s had been suffering an electronics malfunction.

It was, however, a much better story from the other side of the garage as teammate Marco Melandri produced a solid ride to finish the race in second place. The veteran Italian rider needed to call upon all his experience and tenacity to fend off stoic competition from Tom Sykes (Kawasaki Racing Team) in third place. It was an inspiring effort from the KRT man who, just four weeks ago, was rushed to hospital following a crash during testing, with a badly broken leg. The pair regularly swapped positions on track, but the result was decided after a daring move by Melandri through the long sweeping right-hander of turn 3. Having found space on the inside, he forced Sykes to sit up mid corner, resulting in his rival losing momentum and conceding the place – swapping a fair amount of paint in the process. All is fair in love and war.

Leon Camier continued his stellar late season resurgence with MV Agusta, by finishing in fourth place, and the first of the single rider teams.  Having started in eighth place on the grid, the British rider avoided the early race shenanigans and found himself in fourth. Such was the rhythm and pace of Camier, he was able to pull clear of the Pata-Yamaha machine of Alex Lowes (P5). A fact which should not be understated, as the Yamaha is fully backed by the Japanese racing factory.  Lowes produced a solid display in the treacherous conditions, and would have been relieved to have ended a rather barren run at the circuit in previous years.

It was certainly a more eventful race for Lowes’ teammate, Michael Van der Mark. The Dutchman crashed in the middle of the track at the exit of the Nurburgring corner, on lap 4. Whilst he was able to rejoin the race, damage sustained to the rear of the bike limited his performance. Nevertheless he battled through the pack and was in the end content to finish in P9.  The same cannot be said for Xavi Fores (Barni-Racing Ducati) who was brought down by the fallen Yamaha. It was a cruel way for the Spaniard to bow out of the race, as the collision was unavoidable. The bike sadly was too badly damaged to continue the race. A severe penalty for no crime.

A word finally on Davide Giugliano’s peformance. It is only his second race weekend aboard the much maligned Red-Bull Honda machine. However, progress is clearly being made and now showing. Not only was the Italian able to qualify on the second row of the grid (P6), he also managed to secure a rare top ten finish for the team during the race. Eighth place under normal circumstances, is nothing to be excited about – but after everything Honda have been through this year, the result is a definite triumph for the team.