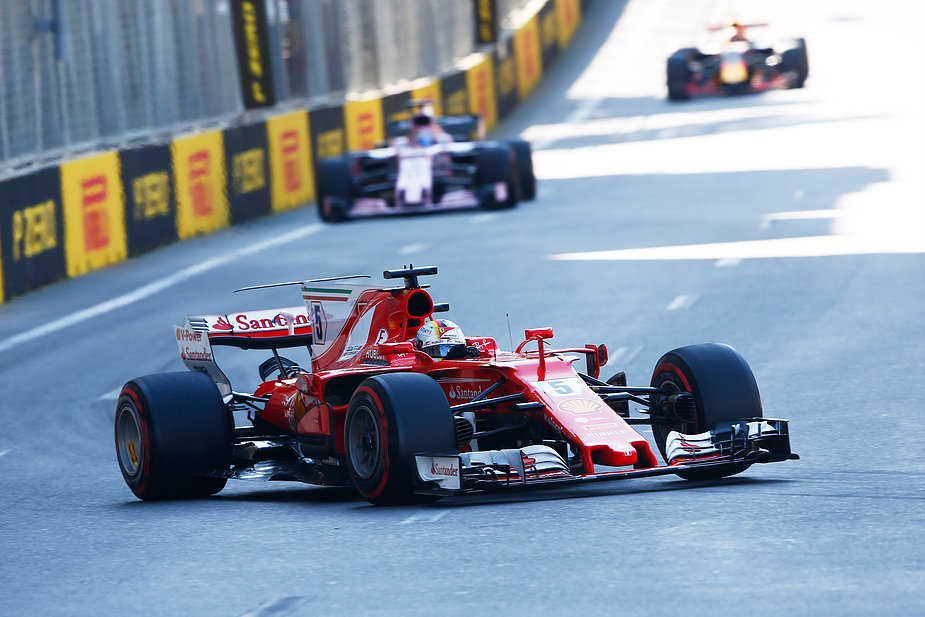 It certainly will be one for him to celebrate, as on his 30th anniversary he avoided being hit with more sporting penalties following his rash clash with title rival Lewis Hamilton at the Azerbaijan Grand Prix.

Vettel was angered by what he saw to be a brake-test on lap 19 at the end of a Safety Car period, and ploughed into Hamilton.

While gesticulating wildly, he then ploughed into the side of his rival and sparked a mass debate over whether he is in fact mad, bad and dangerous to know.

For this, he received a 10-second stop/go penalty, costing him 30 seconds and almost certainly the race victory.

The FIA has noted Vettel’s sincerest apologies and his commitment to devoting time to educational courses over the next 12 months.

They have also warned that a repeat of this behaviour would immediately herald another tribunal, and most likely worse consequences.

In not punishing Vettel any further they have avoided turning themselves into a laughing stock across the wider motorsport world.

It would have sent a bad message out to the stewards to overrule them on something not as cut and dried as many would have you believe.

The debate about whether they awarded the right penalty will no doubt rage on through to this weekend’s Austrian Grand Prix.

No doubt partisans on both sides will claim it either to be the biggest injustice of human kind or that in fact it is a victory for the golden old days where “men were men”.

The issue of whether the stewards got the decision right or wrong is not easy to resolve.

The incident does set a bad example to younger drivers, but the fallout following the handbags should act as enough of a pointer to show that a driver must always stay in control.

While mindless and daft, it is difficult to believe Vettel would deliberately risk damaging his car and putting himself out of the race, even at 30mph. This was pointed out by of all people Mercedes chief Toto Wolff.

Hamilton was right to be aggrieved, angry and upset at the outcome of the race and Vettel’s impromptu dodgems ride.

However, much of that stemmed mostly from his own dramas and had he not had to make an unscheduled pit-stop to replace a broken headrest, he’d have walked home.

It would have been wrong to punish Vettel based on others’, including Hamilton’s, misfortune.

Far more dangerous and indeed pivotal acts have been committed in the heat of F1 battle.

Michael Schumacher in 1994 cutting across Damon Hill’s Williams to after earlier contact with the wall at the title-deciding Australian Grand Prix to ensure that if he couldn’t finish, neither would Hill.

And then we have the infamous first corner of the 1990 Japanese Grand Prix, where Ayrton Senna made sure that Alain Prost didn’t the corner ahead of his McLaren – whatever the cost.

Yes, Vettel’s silliness was under controlled conditions but that just adds to the stupidity of the incident, not the danger.

The FIA have rightly avoided changing the result of the football match because the referee awarded a free-kick instead of a penalty.

With the fall-out from this decision, the Austrian Grand Prix now has more needle than it already had.

Now, let’s get on with racing and watch this intriguing, absorbing title fight play out over the next twenty weeks.

Maybe we’ll all then have our (birthday) cake and eat it.