The first full day then and with 133km’s over eight stages, it would be a challenging day out there. The day would also have the longest stage of the weekend.

First up was SS2 Terranova 1 – 14.19 km and Elfyn was fastest, from Pierre-Louis and Ott. Three different cars in the top spots! All three moved up positions, with Elfyn moving up two places and into the lead, Ott gaining four and into second and Pierre-Louis jumped eight places and into third! The young Frenchman was showing great form, just like last time out in Portugal. 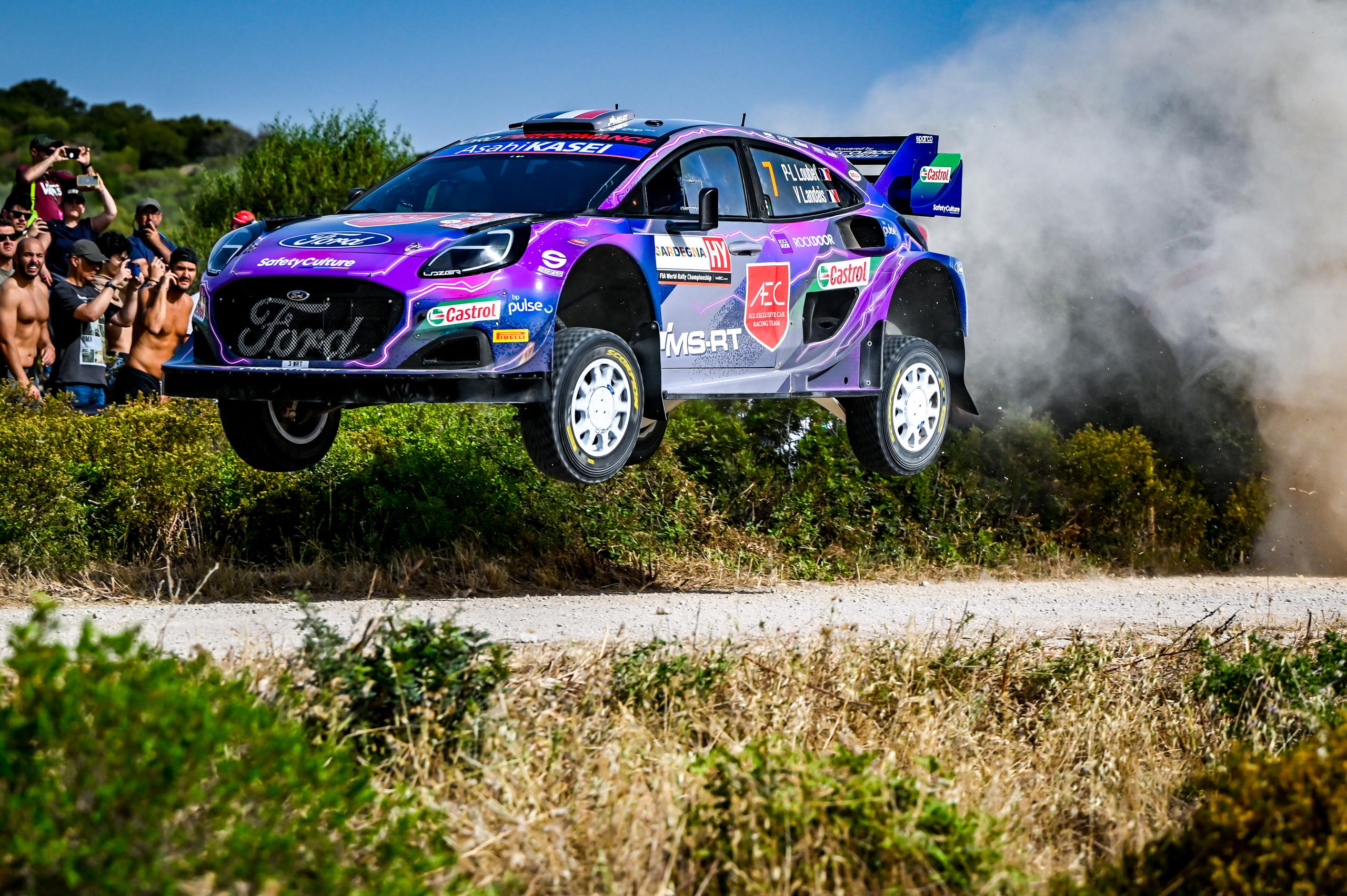 The lead changed at the end of SS3 Monti di Alà e Buddusò 1 – 24.70 km with Esapekka moving up four places and into the lead. The Finn won the stage from Craig and Ott. There was disaster for Elfyn though whose GS Yaris was suffering from a loss of water pressure, and the Welshman retired for the day after the stage. The M-Sport drivers had a mixed stage, the highlight being lead driver, Craig whose time took him ahead of his teammate Pierre-Louis, whilst Adrien dropped back despite setting the fourth best time in the stage. It was a different situation for Gus though who suffered a half-spin and trouble restarting his Puma. The Brit sadly fell to 25th from 10th.

It was all change in SS4 Terranova 2 – 14.19 km as Dani won the stage from Ott and Thierry. The Estonian’s pace took him ahead of Esapekka and into the lead after the Finn could only manage the fifth best time. The gap between them was tiny though, at just nine tenths of a second. Pierre-Louis moved up to third overall, after Kalle suffered a spin and took off his rear wing!

The final stage then before the service break, SS5 Monti di Alà e Buddusò 2 – 24.70 km and Dani took the stage win from M-Sport duo Craig and Pierre-Louis! The top two overall remained the same, with Ott setting the fourth best time from Esapekka who was fifth in the stage. Meanwhile, Thierry had transmission failure, with the result that he now only had front wheel drive. The Belgian dropped down from sixth to tenth. At least there was a service break now for the team to fix the problems.

After the break SS6 Osilo – Tergu 1 – 14.63 km was won by Ott with Esapekka in second and Craig the third fastest time, although he did have a lockup into a left hander just before the bridge, sliding into a bank. Never the less, the Irishman moved up into third place, passing Pierre-Louis.

Into SS7 Sedini – Castelsardo 1 – 13.26 km then and what turned out to be the final stage of the day, and the top three were Esapekka, Dani and Adrien. There was a change again in the leaders, with the stage winner taking the lead and Ott dropping back to second. Pierre-Louis was also gaining places, moving back ahead of Craig and into third again.

“I thought we could be close to the front at the end of today but not necessarily to be leading, so it’s been a good day and I’m really satisfied. It’s been three years since I’ve been leading after a Friday and it feels very good. We started at a safe pace, also because of the hanging dust, but then when it was clear we could push like normal. On this rally you can’t drive at 100 per cent all the time but I think we were consistently at 90 per cent and that was the key today. The most important thing was to secure a good road position for tomorrow and now we have the best position possible, so it’s job done for today and let’s continue like this tomorrow.”

“Today was difficult as we expected, more so in the afternoon. The stages we did this morning were a bit more sandy so it was not so bad to be the first car in some places. We made a few mistakes and lost a bit of time but otherwise it was OK. In the afternoon there was really a lot of loose gravel so it was very slippery. But we managed to get through it. Tomorrow is a long day without any service and it’s going to be tough conditions, so anything can happen. As fourth car on the road it should be a bit better and we’ll try and gain some positions.”

“The feeling was quite good in the car this morning. The opening stage was difficult with the amount of dust but the time was good. Then, in the second stage, we had quite a bad compression through a dip in the road that caught us by surprise and damaged the underside of the car. We started to get some warnings in the car and tried to manage it as best as we could until the end of the stage. But after that, when we investigated it further, it was quite clear it was too difficult to repair at the side of the road in the time we had. It was disappointing for our day to end so early but we’ll get back out there tomorrow and try to take what we can from the weekend.”

“Today’s focus was all about getting a good road position for tomorrow’s stages, and we have achieved that. The guys we are fighting are around us on the order, so the game is much fairer. We had some extreme Sardinia stages this morning between the trees and at high speed; in these places with limited visibility, you can only keep your fingers crossed. We survived the morning and the car felt better on the second loop. In the afternoon, it was a bit more difficult. It was as if the car had three-wheel drive on the final run, which affected the braking and acceleration. The two cancelled stages gave us a chance to bring the car back to service and get it all checked out for tomorrow. We need to go out and fight for the win.”

“We’ve had a good first ‘proper’ day and we are again in the podium fight. We lost a lot of time on the opening stages with the dust, which put us far from the lead, but we’ve come back a bit since. Without that, we’d be a lot closer for sure. I think overall we are performing better than in Portugal if you look at the times. I have completed more kilometres in the car, but I still need some time to adapt; the cars weigh more, it’s a different way of driving, braking points aren’t the same, that sort of thing. Overall, we are in promising shape, and we have a long day tomorrow. We’ll keep pushing for the podium.”

“It was not a great day. We lost the rear drive at the end of the morning and had to do the stage with front wheel drive. The team needs to investigate what happened exactly. It’s sad because I had a better and better feeling from the car, and we were getting closer to the top places. It is what it is, we’re ninth but two minutes from the lead, which means our rally is effectively over. We did the two afternoon stages as best we could, but nothing really changed. Anything can happen, of course. It’s going to be a rough day tomorrow, and I wish my team-mates the best of luck in their fight for the win. The manufacturer points are just as important as the driver ones. From my side, I’ll see how things go; if I feel good in the car, I’ll try to push and have some fun.”

Well, what an incredible first day we have had. Lots of lead changes and yet another problem for Elfyn as well. He’ll restart tomorrow and target getting points in the powerstage on Sunday. Tomorrow sees 131km’s over eight stages, and no mid-day service. Getting to the end of the day will be very tricky.

Pop back at the end of tomorrow to check out my day two report.