After Thursday’s two evening stages the top ten looked like this.

The first full day of competitive action on the amazing roads in and around Monte Carlo saw the two Seb’s battling for the lead. At the end of the first full day, it was the former Citroen champion that was leading for M-Sport. This was the startlist for Saturday’s stages – Ogier, Evans, Neuville, Rovanperä, Tänak, Katsuta, Breen, Greensmith, Fourmaux, Solberg, Loeb. The crews had 97km’s over six stages.

The first stage, SS3 Roure / Beuil 1 – 18.33 km was taken by Seb Loeb, with Seb Ogier and Elfyn Evans second and third. Now there was huge drama for Adrien in his Puma as his car left the road in a huge accident landing at the bottom of a hill. His teammates, were going really well though; Craig was fourth and Gus fifth and Loeb was third and closing the gap to the top two Toyota’s of Ogier and Evans, the Welshman holding second overall.

Into SS4 Guillaumes / Péone / Valberg 1 – 13.49 km and it was another stage win for Loeb in his Puma. Ott and Thierry were second and third fastest. Loeb’s great time meant that he’d jumped ahead of Elfyn into second overall. Oliver Solberg suffered a spin in this one and was holding tenth overall in his i20.

Loeb continued to dominate the top of the time sheets winning SS5 Val-de-Chalvagne / Entrevaux 1 – 17.11 km, the last of the morning stages, with Elfyn second and Thierry third. Our longstanding leader, Ogier, was only seventh fastest, so dropped from the lead to third, with Loeb moving into the lead and Elfyn into second. Thierry was also on the move up the leaderboard, jumping ahead of Craig and into fourth.

After the short break Loeb won SS6 Roure / Beuil 2 – 18.33 km and from Ogier and Elfyn. Gus had a very good stage, going faster than Ogier in the first split, ultimately setting the fourth fastest time. Craig was faster than Thierry and closed the gap a little more to the Belgian.

The penultimate stage, SS7 Guillaumes / Péone / Valberg 2 – 13.49 km, and Gus was really on it, taking his first stage win from Ogier and Loeb. It was Elfyn’s turn to have a slightly off-colour stage only setting the sixth best time and dropping behind Ogier into third overall.

The final stage then, SS8 Val-de-Chalvagne / Entrevaux 2 – 17.11 km and Ogier was fastest from Thierry and Ott. Ogier’s pace brought him a little closer to Loeb who held the lead by 9.9 seconds from his fellow Frenchman and Elfyn in third. Ott’s pace in this one lifted him into fifth overall, at the expense of Craig.

Let’s hear from the drivers after Friday’s action

“We are feeling well. For sure, it was a good day. The first stages were really great, then we had a little hybrid problem. I had a good stage in here I think, but it’s freezing a little bit more now.

“I was really surprised when I was doing the best time in the shakedown in the first pass because usually in the shakedown, I am not great, but since that we tried to push to get a feeling in the car. It’s not a big gap, but we are happy to be leading after the first day.”

“Average I’d say. Everyone would like a bit more, honestly not 150% confidant to push that last little bit more. I’ve not done the rally for a number of years, and just not used to driving on that tricky stuff, frost and yes not the normal Monte Carlo, but yes, we’re here and showing some reasonable speed. We’ll try some things tonight; we can definitely improve the car and have a go tomorrow.

Yes, first stage win, finally, so I can’t complain. The feeling was good in the morning, quite slippy in places, I wanted a quite strong start to the year and we were holding fourth pretty well, and then we had a problem with the hybrid and dropped quite a bit of time and then ended down in seventh and then we got the time back after a very good stage and a stage win, so it’s been a great afternoon and one of the things ticked off. 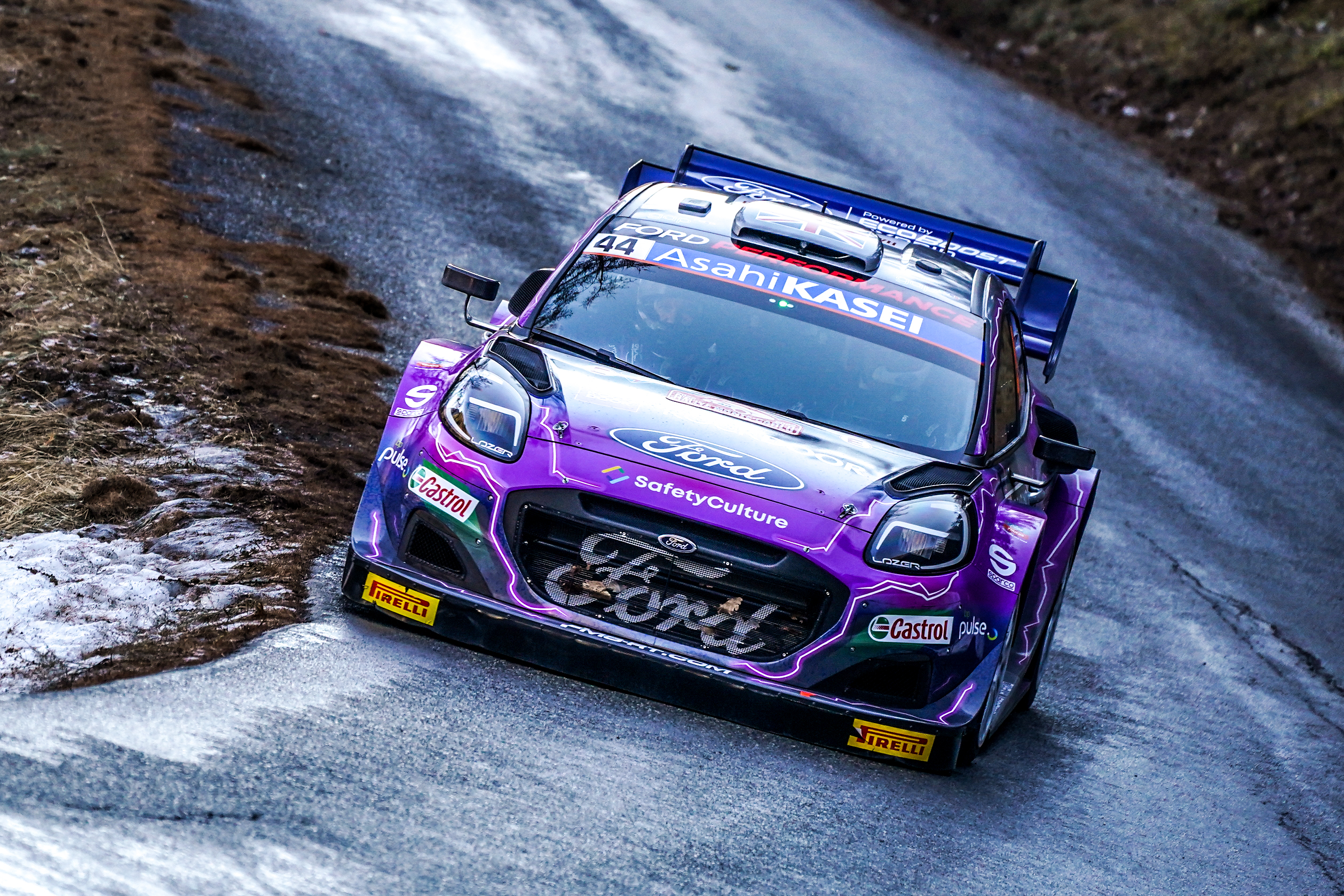 “It’s been a good day I would say, except for the one stage this morning where opening the road was never going to be easy with the icy conditions. I could have taken some more risk but it was not easy to find the limit on that stage. This afternoon I tried my best and I don’t think there was too much potential to go faster. Everything’s still very new so of course there is room for improvement, and we’ll try to adjust what we can with the setup to find a bit more speed for tomorrow. But overall, it’s positive to be here tonight still in a good position to fight for the win.”

“Today has been not too bad but nothing spectacular either. It was disappointing to lose so much time on the last stage. I was perhaps a bit careful in places but I didn’t expect to lose such a chunk of time. The conditions were quite changeable during the whole day, a bit more straightforward on the second pass but it was not easy to judge the changes. But everything on the car has been running as it should with no trouble, so congratulations is due to the team for that because it was a big task to get them ready and to get through a day like this one is impressive. We just need to keep going and see what we can do tomorrow.”

“Today was a big day of learning for myself. These new cars are very different to what we had before and I’m trying to change the balance to be closer to my style as well as adapting and improving my driving. It was a tough morning but in the tyre fitting zone we could make some bigger changes and that improved the car for me. Over the course of the day, we made many steps and it was getting better all the time, and we will try to do something more for tomorrow.”

“If you look at the stage times today, we’ve improved but the feeling in the car still needs some work. It is difficult to have a constant balance and to find the confidence under braking. We have been making improvements all the time. The target remains to get maximum mileage from this rally, and to understand in which areas we must improve. I think we are at the limit on what we can do this weekend. We have to fight with what we’ve got, and we will try some different things on the geometry for tomorrow to get more experience.”

“If you look at the stage times today, we’ve improved but the feeling in the car still needs some work. It is difficult to have a constant balance and to find the confidence under braking. We have been making improvements all the time. The target remains to get maximum mileage from this rally, and to understand in which areas we must improve. I think we are at the limit on what we can do this weekend. We have to fight with what we’ve got, and we will try some different things on the geometry for tomorrow to get more experience.”

“It has been a good day for building experience. We have learned a lot, and although I can’t say I’m happy, in a way I am. We have just focused on surviving and getting the car to the finish. We had a few challenges, so we had to remain calm. We have had some stages in slippery conditions and others with good grip. If you’re not confident, then you can’t find the flow. On the final stage this afternoon, I gave it a bit of a push, but it was very tricky, and I backed off at the end to avoid making any mistakes. We know what we have to do, and everyone in the team is super motivated.”

Tomorrow sees another 95km’s over five stages. Can Loeb and Galmiche hold onto the lead. One thing is for sure, we are set for another amazing day of action!