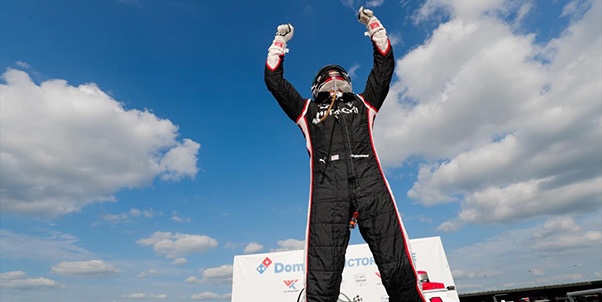 Defending series champion Josef Newgarden closed the points gap to Scott Dixon in the championship with a victory at Worldwide Technology Raceway at Gateway. His second at the famous ‘egg-shaped’ circuit

The Penske driver had been firmly in the hunt behind both pole sitter Takuma Sato and Arrow McLaren SP driver Patricio O’Ward. However, the American seized first position after the final pit stop window with 43 laps remaining after teammate Will Power was caught in traffic while entering the pits.

Josef and Pato both came into the pits on lap 151, the Mexican narrowly ahead. However, a slick pit stop by the Penske crew allowed the two time series champion to beat the Mexican to the pit lane exit. It was smooth sailing from there, leading rhe rest of the way to the chequered flag.

O’Ward eventually settled for second after finishing third yesterday in race one. Missing out on race victories is becoming something of a trademark for the young driver in his sophomore year. It seems like a matter of not if, but when O’Ward will experience the top step of the podium this season as he consolidates third in the championship.

This win will be Josef Newgarden’s 16th in his career and second this season. His first since at the Iowa Speedway and his first at Gateway since 2017.

Pole sitter Takuma Sato was running well until a failed overcut pit stop denied him a top five position. Sato was caught in traffic while trying to overtake backmarkers which inevitable slowed him down on his in lap, allowing the likes of Power, O’Ward and Newgarden through. Unfortunately, it didn’t end there for the two-time Indy 500 winner, bringing out the caution with less than five laps to go by running into the wall. An unfortunate end for what looked set to be magnificent weekend for the Japanese driver.

Dutch rookie Rinus VeeKay had an incredible race from 18th to fourth. He pitted earlier than the rest of the top ten and was able to slice his way through the field. Scott Dixon would round up the top five.

Some honourable mentions include Colton Herta who finished in a solid sixth position and Conor Daly in eight. Herta, who finished in an incredible fourth in yesterdays race starting in tenth for today’s running. It was a masterful drive and even saved a massive ‘tank slapper’ at half distance which could have easily ended the young American’s day.  Daly likewise put on an overtaking masterclass from his starting position of fifteenth. Both drivers have enjoyed a lot of success at this circuit in recent years and it was no exception this weekend.

However, more poignantly, as the racing drew to a close, so too did a certain Brazilians time in the sport. Sadly, today was Tony Kanaan’s last scheduled race in the IndyCar series. Though he finished in 19th position, it will be his 2004 series championship, his 2013 Indy 500 win, his 16 other career wins and 15 pole positions that he will be remembered for. Liked by the entire paddock it is a sad day to see a great close a chapter in a remarkable career that has spanned over twenty years.

We look forward to seeing Tony Kanaan again in a potential future Indy 500 guest appearance. But until then, we at the PitCrew Online wish ‘TK’ a happy retirement.

Alongside Kanaan the IndyCar circuits will take a five week break before we return to Indianapolis Motor Speedway for another double header weekend.