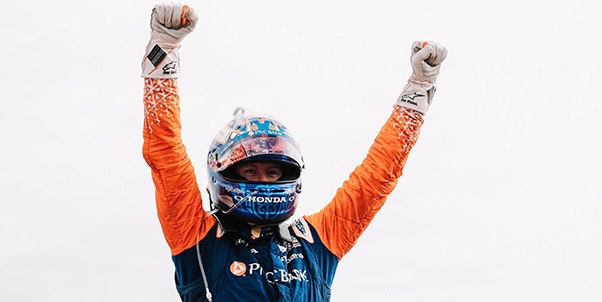 Scott Dixon continued where he left off during the closing stages of the Indianapolis 500, defending from a late charging Takuma Sato to take his 50th career IndyCar win at the World Wide Technology Speedway – his fourth win this season.

Patricio O’Ward had led over 100 laps of the Gateway, only to be beaten out of the pits by a quick and efficient stop by Dixon and the number nine Chip Ganassi crew. The five-time world champion had played the long game, sufficiently saving fuel behind the Mexican McLaren driver meaning that he only required a short refuel to get him out across the pit exit line comfortably ahead.

Further drama ensued when two-time Indy 500 winner Takuma Sato had a slow right rear tyre change, which may well have cost him the net lead of the race. Instead, he was shifted out just behind Patricio O’Ward and firmly in the hunt for the race win.

On fresh rubber, the Japanese driver was able to make quick work of O’Ward with an ‘Evel Knieval’ inspired move around the outside. O’Ward nearly lost control of the car as Sato swept across the front of the Arrow McLaren SP but was able to stabilise the car to finish in third. It will be a bitter pill to swallow as it is the third time the Mexican has had a race win snatched from him in the closing stages following Road America and Iowa.

Sato was then able to set out to close the gap to Dixon. It would eventually come down to as much as two tenths of a second, however Dixon was able to just hang on to achieve the third most wins in IndyCar history behind A.J Foyt and Mario Andretti. He had never before won at the Gateway and has now won at 23 different tracks.

It was certainly a memorable race that began in spectacular fashion. As the race got underway, Alex Palou had to pull out to the left of the rolling start to avoid the car in front. Those behind took this to be a signal for the start of the race. Unfortunately, this resulted in a massive pileup involving Simon Pagenaud, Oliver Askew, Zack Veach and Alexander Rossi among others.

Colton Herta finished in a magnificent fourth position, continuing his strong run of form this season. After being benefited by a late caution, Colton was able to  jump the Husky Chcolcoate Chip Ganassi of Marcus Ericsson who finished in a strong P5.

Rinus VeeKay was affected by the early collision and decided to pit only a few laps in. He continued to undercut the entire field making plenty of positions after every pit window. From a starting position of 14th he finished in a magnificent P6. A deserved result for a rookie that has been plagued by pit stop issues and bad luck.

Ryan Hunter-Reay and Felix Rosenqvist finished in P7 and P8 respectively. The Swede benefited massively after a late caution brought on by bad weather meant that those who pitted would lose out massively. By staying out longer he was able to shuffle further up the order and was potentially looking at a top five finish. Unfortunately, he almost lost the rear of the car on the restart and plummeted down to ninth were he stayed for the remainder of the race.

Rounding out the top ten was Tony Kanaan and a magnificent performance from Conor Daly. The American put in an incredible display to make it into the top ten during the first half of the race. However, after pitting early the late caution disadvantaged him sending him tumbling down the order to P13. To regain lost ground the way Conor did shows skills, composure and determination.

Scott Dixon’s win now moves him to 386 points in the championship, now 117 clear of Josef Newgarden who bagged just 18 with his 12 place finish.

IndyCar now moves on to a second race at Gateway on Sunday where Takuma Sato will be looking for redemption starting on pole position.