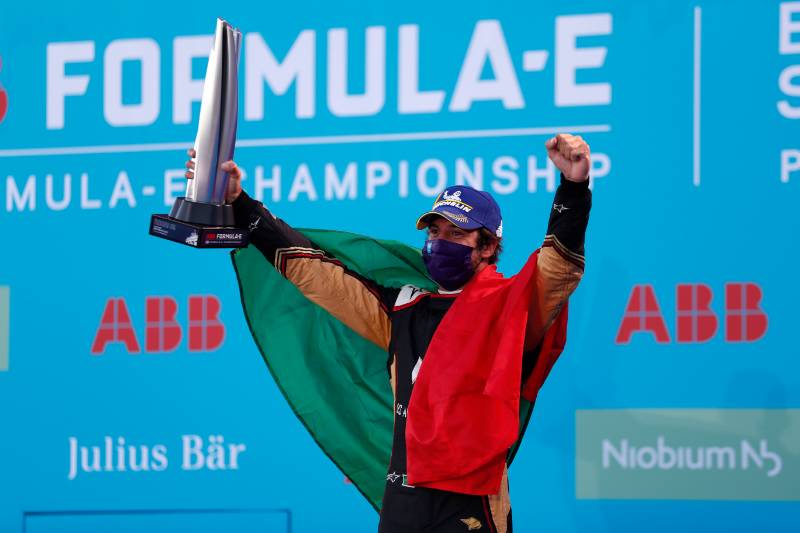 Driving a Techeetah, winner of Formula E’s constructors championship last year, Antonio Felix da Costa was always expected to achieve great things at the Chinese-based team. The Portuguese driver has had somewhat of an interesting journey in Formula E, starting out from the doldrums of Aguri, a team that couldn’t keep up with the financial demands of the electric series and folded in the second season. Da Costa settled at Amlin Andretti, but it wasn’t until the fifth season when BMW entered the fray full-time that the team began to really challenge for race wins. It wasn’t a shock last year when Da Costa was announced to be filling the seat alongside double world champion Jean-Eric Vergne. His previous season with BMW i Andretti had been one of his strongest showings and he had claimed victory in the first race at Riyadh before trailing off towards the latter end of the season. Da Costa entered this season, hungry and eager to prove himself – and he has so far. Before the covid-20 pandemic put the season on pause, Da Costa had taken his first win with the team in Marrakesh and had two second place finishes in Santiago and Mexico.

It was critical that he kept the momentum going and pressure on his other title rivals after a lengthy break as Formula E returned to Berlin for a blockbuster six race season finale to be held over the next nine days. The Techeetah man did his job by taking a dominant pole position, beating out his teammate and defending champion Jean-Eric Vergne by a margin of three tenths. Andre Lotterer put in a decent first two sectors to slot into P3, whilst Nissan’s Sebastien Buemi too held promise but fell just short in the final sector, having to settle for P4. Nyck de Vries had to settle for P5 after a costly mistake in sector 2, a disappointing result for the Dutchman who had been the quickest in the final practise session and Jerome D’Ambrosio was finally able to lift his struggling Mahindra into P6.

Da Costa held his position at the start of the race, whilst Lotterer made a poor start and was immediately pressured by Buemi. The Nissan man was forced to yield, but after a few laps, the train of cars behind Lotterer became difficult to ignore as the two Techeetahs of Da Costa and Vergne began to build a gap. However, it was soon wiped away as Robin Frijns was punted into the wall by Max Gunther, bringing out the safety car to erase the time the two Techeetahs had carved out.

As the race restarted, Da Costa got away with no problems as Sam Bird managed to pounce on D’Ambrosio for P6 and began to pressurise fifth placed de Vries as Lotterer began to mount a challenge on his ex-teammate Vergne for P2. His hard work was undone as he missed the attack mode marker and fell victim to de Vries, before snatching the final podium position back a few laps later by pressurising the Dutchman into a mistake. Massa was the second casualty of the race, the Brazilian locked up on the approach to turn one, stranding for Venturi at the corner and bringing out a full course yellow as the time ticked down. The racing soon got underway once again and Da Costa just held onto the lead when deploying his final attack mode to stay ahead of teammate Vergne, as Lotterer and Bird battled for the final podium position, it was a fight that would continue into the latter stages. Vergne soon began to drop down the order in the final stages of the race, presumably struggling with energy consumption issues before any hope of points was wiped out as Audi’s Lucas di Grassi hit him on the penultimate lap, sending the reigning champion back to the garage to lick his wounds.

Da Costa cemented his status as championship leader and looked relatively unbothered for the majority of the race, despite a nervy last half lap where he looked in danger of running out of energy, claiming his second win of the season, ahead of Andre Lotterer and Sam Bird who finally got his championship hopes back on track. However, despite this seemingly easy win, Berlin threw some sparks out in the form of the building pressure between Da Costa and teammate Vergne, the Frenchman not impressed by what he felt was overconsumption of energy needed to make sure he kept up with his teammate. Only time will tell in the next nine days as Formula E will return tomorrow.