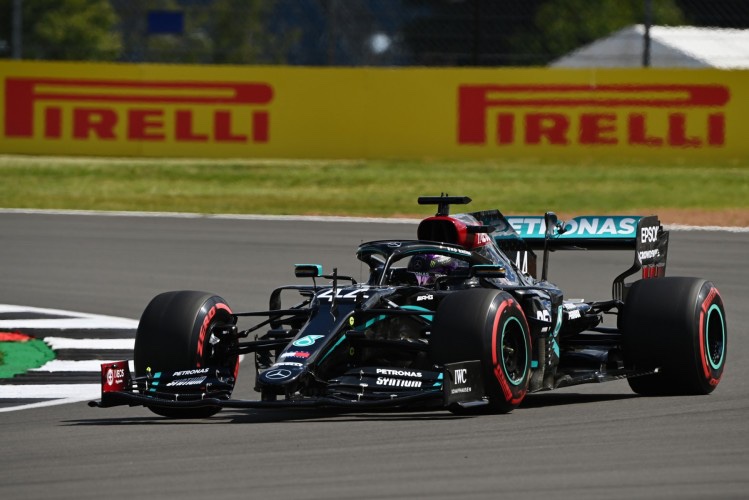 Lewis Hamliton had to literally drag his Mercedes across the finish line at Silverstone on Sunday afternoon to become the record 7th time winner of the British Grand Prix.

The Sunday for Mercedes was going in a very expected manner with both the cars comfortably leading 1-2 until it all kicked off with 5 laps to go. Valtteri Bottas complained about heavy tyre vibrations which did not seem like a big deal until his front left tyre suffered a puncture with 3 laps to go and he was out of a points finishing place just like that after having to make a pitstop which saw him finish 11th. Luck was on Lewis Hamilton’s side as he also suffered the same fate as his teammate but it was on the very final lap which enabled him to carry the Mercedes across the line for his 88th race win.

Max Verstappen took 2nd place amidst all the chaos on an afternoon where he looked set for a lonely 3rd place finish until the sequence of punctures kicked off which promoted him to 2nd. He could have even taken victory if not for the team’s idea of pitting for fresh tyres in order to go for the fastest lap just the lap before Lewis’ puncture. Charles Leclerc also ended up with a very unlikely last podium spot for Ferrari despite running at 4th the whole race thanks to Mercedes chaos at the end. Sebastian Vettel in the other Ferrari finished his race at the final points spot in 10th to cap off what was a very below average weekend for the German driver. Alex Albon in the other Red Bull made a late charge through the field after stopping twice which saw him finish 8th. The Thai driver will take the result as welcoming concerning the pressure on him about keeping his seat coming into this weekend and also after tangling with Kevin Magnussen in as early as the second lap which ended up with the Danish driver retiring out of the race and could also have ended badly for Albon too.

McLaren also looked set for a strong finish with Sainz at 5th and Norris at 6th when Sainz suffered the same problem as both the Mercedes on the penultimate lap which saw the Spainard finish 13th. Norris managed a 5th place finish despite being overtaken by Ricciardo who hung in there the whole race and finished an impressive 4th after all the events of the race unfolded. Esteban Ocon in the other Renault finished 6th after a strong drive following his earlier battle with the Racing point of Lance Stroll who finished 9th. The Silverstone based team would definitely be very unimpressed with the weekend as they could only get one car to the grid as the sensational return of Nico Hulkenberg did not go according to plan. Mechanical issues meant that the returning German driver’s race had finished before it even began.

Pierre Gasly probably had the best weekend out of the rest after finishing 7th following an impressive drive throughout the race. The Frenchman starting 11th on the grid was on the back of Vettel’s Ferrari from very early on and managed to pass him with a slightly controversial move. He had a mini battle with the only Racing Point as well and came out on top and made his way into a high points place. The other Alpha Tauri of Danil Kvyat retired very early on as he carried too much speed into Maggotts while suffering a right rear puncture and ended up in the barriers. Both the Alpha Romeo drivers were complaining about rare tyres during the race and ended their races with Giovinazzi at 14th and Kimi at 17th. George Russell finished 12th in his Williams after complaining about handling issues during the race. He would be left pondering as to what could have been if he had not had the 5 place grid penalty following an excellent qualifying on Saturday.

For the first time this season, Bottas failed to secure a top 3 finish after the events during the final laps which means that his championship hopes have taken a massive hit as he now sits 30 points behind his teammate Hamilton, who is in the driver’s seat to take his 7th championship and equal Michael Schumacher’s all time record. Max Verstappen also looks to be slowly cementing his 3rd place in the driver standings after his strong 2nd place finish today. It is however going to be all to play for from P4 to P10 with the midfield battle looking very promising between Racing Point, McLaren, Renault and Ferrari.