The final MotoGP preseason test of 2019 took place over the weekend in Qatar, with teams and riders looking to try any last new things they might have wanted to evaluate before the first Grand Prix – in Losail – which gets underway in just nine days’ time, as well as look for further confirmation on items tested in Sepang a couple of weeks ago and to prepare for the Grand Prix of Qatar.

It was Maverick Vinales (Monster Energy Yamaha MotoGP) who topped the combined times of the test, with a 1’54.208. Vinales had two tenths on the field, but was still six tenths shy of Johann Zarco’s outright lap record set in last year’s Q2 session at the Grand Prix itself. Vinales’ positive tune – which has been a constant since the post-season Valencia test last November – continued throughout the Qatar test. The Spaniard happy with the feeling he has on the bike, though still pointing out Yamaha’s need to improve on acceleration. It was this concern which was echoed by Vinales’ Monster Energy Yamaha MotoGP teammate, Valentino Rossi, who sounded almost desperate after day two of the test. The Italian spent the second day trying some new things, and lost his direction, ending the day in nineteenth. He recovered on the final day, but feels he needs more to fight at the front. Overall the preseason has been positive for Yamaha, but we won’t find out exactly how positive until the paddock returns to Europe.

It has not been an easy preseason for Honda, with Cal Crutchlow (LCR Honda MotoGP), Marc Marquez (Repsol Honda Team) and Jorge Lorenzo (Repsol Honda Team) all suffering from injuries throughout the winter. This was made clear on the first day in Qatar, after which Marquez declared that the RC213V was a way behind its rivals. However, the strength of HRC’s package was shown on day two, when that deficit was erased, and Lorenzo and Marquez climbed the time sheets. Marquez has still yet to make a proper long run, as he is still nursing his left shoulder, but the laps he did put together showed him to be one of the strongest, which – of course – is a surprise to no one. In comparison, Lorenzo spent a lot of the test working on ergonomics, a big part of his success in Ducati. The sooner HRC can get him completely comfortable on the RC213V the sooner he will be able to fight for wins regularly.

The test was something of a disaster for Cal Crutchlow, who is missing some feeling with the front of the 2019 RC213V – an area which has been worked on over the winter to try to stress the front tyre less under braking. Another issue which was affecting Crutchlow in Losail was the size of the boot on his injured ankle, because he could not use the rear brake properly. Things like that should get easier, in theory, for Crutchlow over the course of the season, but his feeling on the bike is something which could prove more problematic for the Brit in the longer term.

Ducati’s test was mixed, with Mission Winnow Ducati duo Andrea Dovizioso and Danilo Petrucci both featuring in the top four on day one in Qatar, and Petrucci in fourth as well on the second day. However, by the end of the test, only one Desmosedici figured in the top ten, that of Petrucci. Meanwhile, fellow GP19 runners, Dovizioso and Jack Miller (Alma Pramac Racing) were in fifteenth and eleventh, respectively. Dovizioso admitted to a misdirection on the final day in Doha, whilst Miller was content with his performance, and is positive about his chances for the season opener, as is Danilo Petrucci who showed impressive pace and consistency on his long runs.

Perhaps one of the things which helped Petrucci in the long runs is the new piece of aerodynamics debuted by Ducati in Qatar, which appears to direct air towards the rear tyre, keeping it cool. As the heaviest rider on the grid, Petrucci stresses the tyre more than any other, which is exacerbated by the Desmosedici’s massive horsepower (although it must be noted that, looking at speed traps, Honda seem to have completely erased their deficit to the 90-degree L4 motor in the GP19). The additional stress caused by Petrucci’s weight means he builds heat in the tyre more than any other rider, and it is this which limits the Italian the most, so any method Ducati can come up with to keep the rear tyre cool is welcomed with open arms by the number nine. 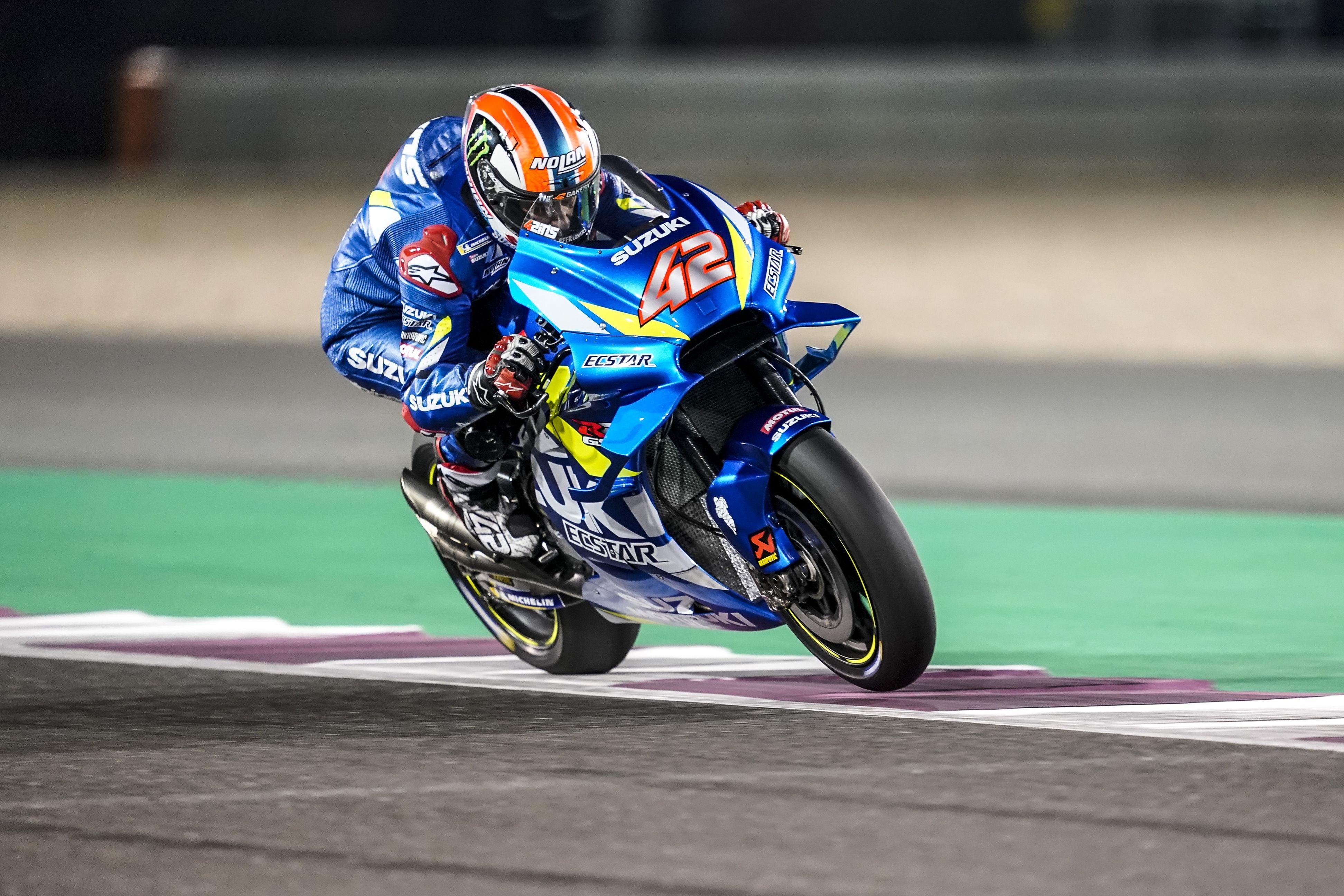 One of the most impressive preseason performers has been Alex Rins (Team Suzuki Ecstar) on his GSX-RR. After day two in Qatar, the 2013 Moto3 runner-up had featured inside the top two in four of the five days of testing and shown impressive race pace in both Losail and Sepang. Day three in Qatar saw Rins fall outside of the top ten, just as he had in Sepang, but there is no doubting the impressive gains made by Suzuki over the winter, and Alex Rins is clearly all too ready to take advantage of those. In Doha there was a new split-pipe exhaust for Rins to try (similar to those seen in Moto2 in the last couple of years). This may not have given an improvement in absolute power, but the top end gains made in the motor department of the GSX-RR over the winter may have prompted the engineers back in Hamamatsu to design a new exhaust to make that power more manageable.

Aprilia had a new fairing to try in Qatar, and also had the privilege of an Andrea Iannone (Aprilia Racing Team Gresini) who was fully fit to ride in all three days. Additionally, Aleix Espargaro (Aprilia Racing Team Gresini) was able to be fast, despite admitting that he had to push the limits of the bike to be competitive. So far, though, Aprilia’s reversion to 2017’s RS-GP design appears to be working, and they look set for a decent 2019.

KTM, like Ducati, had a mixed test. Pol Espargaro (Red Bull KTM Factory Racing) showed impressive speed throughout the three days, and reaffirmed his position as KTM’s strongest rider at the moment. His factory KTM teammate, Johann Zarco, however, seemed to take a step back from where he was after Sepang, and was only nineteenth at the close of the three days. There is clearly still a lot of work to do for the Frenchman with the RC16 before he is truly comfortable with it, but in Sepang he showed what his potential with the bike is, and both he and KTM should use that as encouragement going forward.

If nothing else, preseason testing showed us that the fight for top rookie this season will be spectacular. Francesco Bagnaia (Alma Pramac Racing) produced a brilliant hot lap in Sepang with his Ducati GP18 and went on to impress in race trim in Doha, ending the test thirteenth in the combined times, ahead of Dovizioso. Whilst Joan Mir (Team Suzuki Ecstar) had some impressive speed in Qatar aboard his Suzuki GSX-RR.

Additionally, Fabio Quartararo (Petronas Yamaha SRT) was second in the Qatar test combined times, only two tenths from Maverick Vinales, and showed good speed on the long runs, too. Miguel Oliveira (Red Bull KTM Tech 3) may not be able to challenge the likes of Mir, Quartararo or Bagnaia on a regular basis this season, owing at least in part to his machinery, the progress the Portuguese has made over the winter has been impressive, and he is now clearly faster than teammate Hafizh Syahrin (Red Bull KTM Tech 3), and ended winter testing only 0.057 seconds slower than Johann Zarco. This year’s rookie battle might be the most exciting in recent memory.

With testing now complete before the season proper gets underway with free practice one at the Losail International Circuit on March 8th, the factories will now be sifting through the data gathered over these three days in Qatar to try and arrive at the Grand Prix in the best shape possible. It is not long now until we find out the reality of the order for the 2019 MotoGP World Championship.