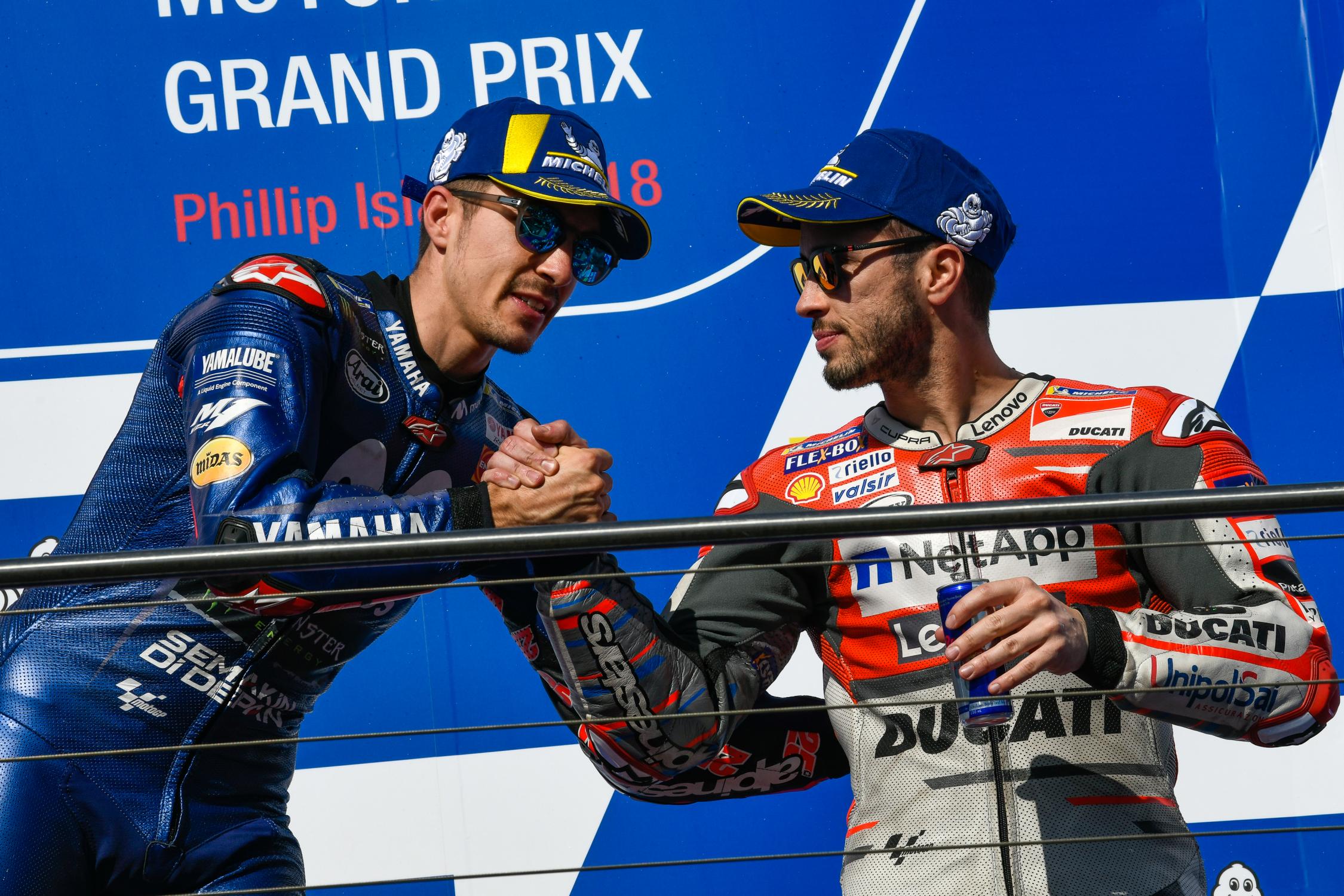 Andrea Dovizioso secured yet another podium finish this season, with a hard fought third place during the Australian Grand Prix. Such were the scenes of celebration beneath the podium and back in the team garage, a casual observer could be forgiven for thinking they’d won the championship.

The celebratory scenes from Sunday starkly contrast with last year’s corresponding Grand Prix, which was a complete disaster for Ducati. Slow times during the practice and qualifying sessions resulted in the humiliation of both factory riders, Dovizioso and Jorge Lorenzo, having to start from the fourth and sixth rows of the grid respectively. The race fared even worse as between them they could only manage a frankly woeful three points. It effectively killed all realistic possibility that the Italian rider could become world champion that season.

Dovizioso demonstrated serious front running pace all throughout the weekend, rarely being found outside the top 5 of the timesheets. A remarkable feat in itself as, traditionally, the Phillip Island circuit is one of the worst for Ducati. Without any long straight to blast away from the pack, and a plethora of fast sweeping corners (so long the nadir of all Desmosedici machines), the Italian team generally grit their teeth and pray for the round to end quickly. To negate the severe loss of lap time due to the above reasons, riding style – and commitment – becomes of paramount importance.

It cannot be underestimated how brave Dovizioso is under braking, regularly being given the title of ‘Last of the Late Brakers’. Although there is no official measurement as to the stopping points of each rider, from the TV images the Ducati man does visibly brake later than the rest of his rivals. In addition to this, he possesses pinpoint accuracy with both his corner entry and exit lines. All of which results in an extremely competitive performance regardless of the circuit.

Speaking after the race, Dovi was beaming in the winners’ enclosure: “Phillip Island was a fundamental test to understand our level of competitiveness and now we know we have made a good step forward over last year.” Typically understated as always. Ducati have made an enormous step with the development of their bike.

Across the garage, there were equally joyous scenes. Standing in for the injured Jorge Lorenzo, 33-year old Alvaro Bautista enjoyed a brilliant first weekend on the Desmosedici GP18. Having not ridden this year’s machine at all before the Friday practice sessions, the Spaniard went to considerable length in the build up to the weekend, stating that Ducati “had no real targets to aim for”.

Perhaps predictably as a consequence, he took a few tumbles during the early stages of the weekend as he learnt where the performance limits of the factory bike were. Despite this, Bautista produced a faultless race day performance, looking completely at one with the factory bike – and racing it as if he had been for a full season. His riding style – comparable to that of Casey Stoner – suits the Desmosedici, and the Spaniard relishes the physicality required to haul and wrestle the bike through the faster corners. Having started from P11 on the grid, Bautista charged through the pack, dicing for a place on the podium alongside his teammate for almost the entirety of the race before falling back to consolidate fourth place.

Speaking after the race, Bautista explained the reason for dropping behind his teammate:  “In the last few laps I made a few small mistakes and lost contact with Dovizioso and Iannone, but in any case I’m very happy with my overall result, especially for the team and for Ducati, whom I would like to thank once again for the trust they have shown in me.” Any disappointment for not making the podium quickly evaporated, having achieved a lifetime ambition to race for the factory team.

Despite not taking the race victory, Dovizioso has nevertheless demonstrated to the full just how far Ducati have developed the Desmosedici this season. It is still a rocket down a long straight, but crucially they have now made a bike that is stable enough at most circuits to enable the riders to attack the faster corners with confidence.

As for Bautista, he has almost certainly secured the factory ride now for as long as Lorenzo remains out injured. The result for the Spaniard could not have come at a more opportune moment ahead of his move to World Superbikes next season, with the factory supported Aruba.it Ducati team. A clear statement of intent to the established front runners of the series, watching on from their hotel rooms in Qatar.