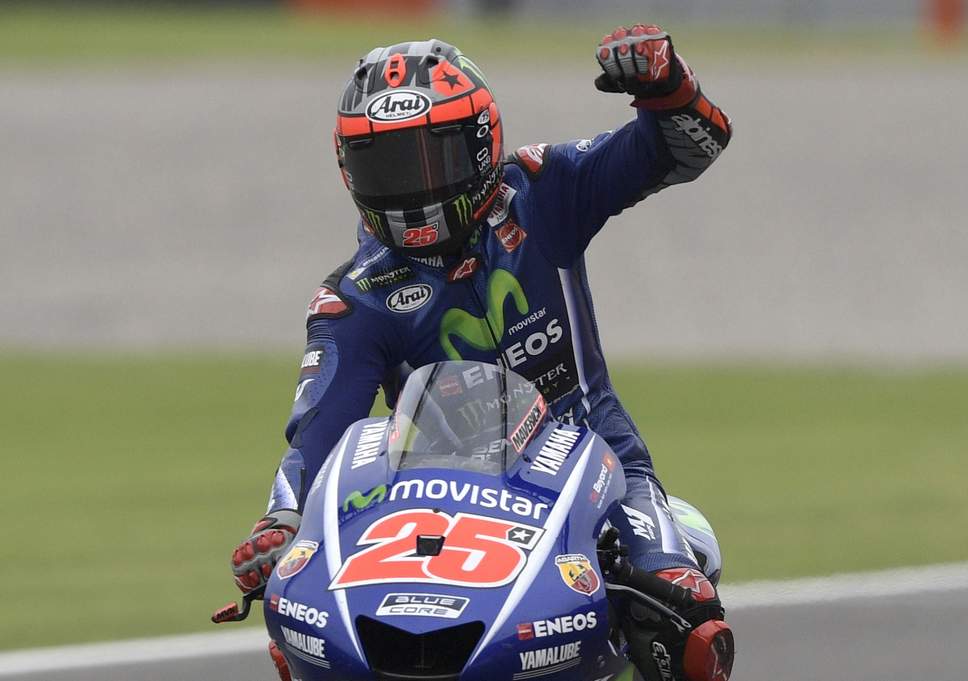 Maverick Vinales ended the longest winless streak in the history of the Japanese manufacturer with a blistering ride, at the Phillip Island circuit.

Having qualified in the middle of the front row Vinales (Movistar Yamaha) was a constant presence at the front during the opening stages. This in itself was an early warning sign to the field, as the young Spaniard has routinely dropped back through the pack at the start of most races this season.

After a few laps, in which to allow the tyres to warm up on the cool track surface, Vinales forced his way to the front with some brave manoeuvres at the Hayshed and over the top of Lukey Heights. Once in the lead the Yamaha man pulled clear from his rivals with ease, setting a series of fastest lap times until he’d opened up a more than manageable lead of 4 seconds…

There was a ferocious race-long battle for the remaining podium places. Andrea Iannone (Team Ecstar Suzuki) eventually secured second place, after holding off the ever-present Andrea Dovizioso (Ducati) in third. The two Italians wound back the clocks to Austria 2016, when (then as Ducati teammates) they’d diced it out for victory.

Alvaro Bautista (Ducati) first weekend on the 2018 factory Desmosedici machine, secured a brilliant fourth place. Replacing the injured Jorge Lorenzo, the achievement of Bautista cannot be understated. Prior to this week he had never ridden the 2018 Desmosedici before, perhaps reflected in his relatively modest starting place on the grid – P12. Powering his way up the order and once settled into his rhythm, he was not be moved outside of the top five, even leading his team leader for multiple laps. A strong display from arguably the most underrated rider on the grid.

Although Bautista eventually dropped back from Dovizioso and Iannone in the closing stages, he had more than enough in hand to fend off Valentino Rossi (Movistar Yamaha) and Alex Rins (Team Ecstar Suzuki). Both men had fancied their chances in the run up to this weekend of emerging with at least a podium finish to their names. Rins will not be too disappointed with his fifth place as in truth his Suzuki, whilst working well through the faster flowing corners, struggled visibly down the main straight with a lack of power. Rossi, despite wringing every ounce of performance from his M1, will leave the circuit tonight wondering how on earth his teammate could cruise to victory whilst he could only manage P6.

Jack Miller (Alma Pramac Ducati) was the first independent rider under the chequered flag, giving the passionate and knowledgeable home crowd yet another reason to cheer. On an old GP17 machine, the popular Australian gave it everything – even leading on the opening laps as he had done so this time last year. Although disappointed in his personal result, his team were in a very celebratory mood after the race and with good reason – Two Ducatis in the parc ferme winners’ enclosure (Miller and Dovizioso). Additionally, five riders aboard Desmosedici machines scored points – compared to this time last year when the best finisher for the manufacturer was Scott Redding in a very modest fourteenth place.

Marc Marquez (Repsol Honda) and Johann Zarco (Tech3 Monster Yamaha) involved in a frightening collision on the entry to turn 1 early in the race. Approaching the fast right hand bend, Marquez moved across to the left hand side of the track to open up the corner entry. However, unsighted for the Spaniard, was Zarco’s Yamaha. With nowhere to go, and no time to take any evasive action, the Frenchman struck the back of the Honda and speared off into the gravel – reportedly at around 280kph. The Yamaha was completely wrecked in the aftermath, but thankfully Zarco walked away shaken but not stirred. True testament to the both the trackside safety measures, and the air-bags inside the riders’ leathers. Marquez retired from the race soon after, but both will be fit to fight it out again next week in Malaysia.

Bradley Smith secured a solid finish in tenth place for the Red Bull KTM team. Prior to the race it had been another difficult weekend for the 27-year old, but dug in once again dragging the RC18 kicking and screaming into a very respectable position.

Finally. a mention for Belgian rider Xavier Simeon (Avintia Reale Ducati) who scored his first point in the MotoGP world championship with fifteenth place. It has been a difficult debut season for him, having spent the majority of it aboard the outdated GP16 Desmosedici. However, since Tito Rabat sustained his broken leg at Silverstone, Simeon has been on a GP17 machine and today he showed he can be competitive in the premier class.